The Bank of Canada is widely expected to hold interest rates steady on Wednesday at 14:00 GMT and set a new tone for 2020 as a layer of global uncertainty on the trade front has been removed. Markets, however, may have overpriced the positive developments, exposing the loonie to a downside correction if the BoC governor delivers cautious comments about the country’s 2020 performance. Yet, a rate cut in 2020 might not work in policymakers’ favor as household remain highly leveraged.

The loonie was among the best performers of 2019 after the British pound, gaining 4.6% against the US dollar as the Bank of Canada unlike its major counterparts did not participate in the global monetary easing trend.

Canada is vulnerable to global trade conditions as it is highly depended on export activities and commodity prices. However, the BoC governor did not see any reason to cut borrowing costs in 2019 as inflation sat near its 2.0% target at a time when other major central banks were not even close to achieving their price goal. The labor market was overall a plus as well, printing the second highest number of employment growth since 2007 despite the worrying declines in October and November, with the unemployment rate falling to the lowest since 1974. Rising oil prices were contributing too, thanks to tensions in the Middle-East.

In terms of trade, the truth is that the Canadian deficit did not see any deterioration from the exchange of import tariffs between the US and China but instead narrowed in 2019 even though business sentiment as reflected by PMI readings deteriorated. Still, Canadian GDP growth, dragged by softer consumption, followed the US and Chinese economic expansion lower, keeping policymakers cautious during the year. 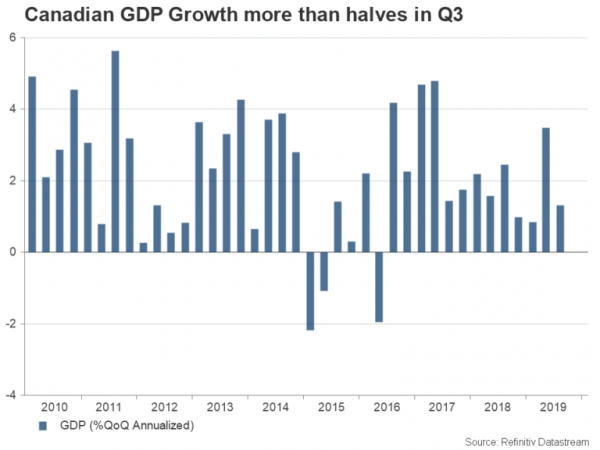 As major risks such as the US-China trade war and Brexit have taken the back seat now, central banks are planning to hold rates steady for the most part of the year unless trade and political conflicts re-escalate, and data fail to show meaningful improvement. Canada, whose rates are the highest among G10 economies, could comfortably apply a more accommodative monetary policy. However, with the household debt-to-GDP ratio resuming its upside direction in 2019 but at a relatively softer pace than in previous years, such an action could rather push consumers towards an unsustainable spending spree, consequently restricting GDP growth in the future. Hence monetary easing may not be on the cards in 2020 but is still not be off the table if data sharply deteriorate and additional fiscal spending announced for the new year fails to support the economy.

Data in focus this week

For the meantime, traders could look for economic evidence at the headline Consumer Price index released before the rate announcement, which is expected to hold stable at 2.2% y/y in 2019 on Wednesday at 13:30 GMT and slightly above the BoC’s inflation targets. Retail sales due on Friday at 13:30 GMT could also bring smiles to policymakers’ faces if they strongly rebound back into the positive territory and to 0.4% m/m in November after tumbling to an almost one-year low of -1.2% in the preceding month. 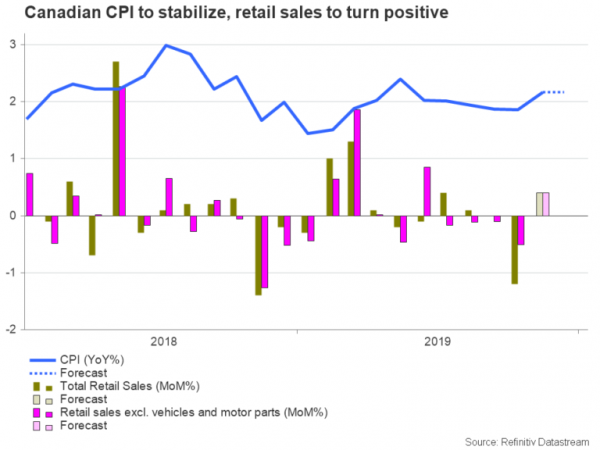 How loonie could react?

As regards the Canadian dollar, markets are certain that the Bank will not change rates this month, therefore the rate announcement itself will not affect the currency. The details in the monetary policy report and the press conference scheduled at 15:15 GMT, however, could move the loonie as this is the first policy meeting of the year and traders are trying to figure out the central bank’s 2020 outlook for the Canadian economy.

Particularly, the BoC could welcome the breakthrough in Brexit and trade tensions and the Senate approval of the new NAFTA deal in the US , expressing optimism about the Canadian business sentiment. Yet, with the US and China moving to phase two of negotiations, which is expected to be more complicated, and the UK starting negotiations on future trade relations with the EU, the BoC governor Stephen Poloz, whose term ends in June, could reasonably highlight that negative risks may re-emerge in the second half of the year. In this case, the size of the volatility in the loonie will depend on whether markets are more optimistic about the Canadian economy than policymakers currently are. If Poloz uses a more cautious tone than markets anticipate then the loonie will likely drift downwards, letting USDCAD to challenge the 1.3100-1.3140 region. Otherwise, should policymakers paint a brighter picture for Canada, USDCAD could reverse lower to retest the 1.3027-1.2960 restrictive zone.

The Tale of Two Recoveries: Canada Versus the U.S.