U.S. – As One Source of Uncertainty Fades, Another Intensifies

The advance reading on fourth-quarter GDP showed that U.S. economic growth continued to hover around 2% for the third quarter in a row. This steady profile however, masks softening domestic demand growth. Support from consumer spending waned considerably at the end of the year (Chart 1). This morning’s higher frequency ‘personal income and outlays’ report showed a rollercoaster ride within the quarter, with real spending up a soft 0.1% in December following a 0.3% rebound in the month prior. While government spending also contributed to the headline, private investment was, once again, a major drag. Putting the pieces together, domestic demand grew at only 0.6% (q/q annualized) – the weakest print since late 2015. Net trade was instrumental in lifting up growth, adding 1.5 percentage points to it. Still, instead of a major boost in exports (1.4%), this performance was largely the work of a sharp decline in imports (-8.7%).

Two thousand nineteen is now history. Economic growth on an annual average basis decelerated to 2.3% from 2.9% in 2018. We expect the pace of expansion to slow a bit further this year, but to remain near the 2% mark. Consumer spending has lost momentum, but solid labor market fundamentals suggest that it will remain an integral part of the growth story. At the same time, business investment should not be the drag that it was in 2019. While the U.S.-China trade relationship could still prove a wildcard, the phase one trade deal reduces near-term trade uncertainty and should allow for at least a modest rise in business spending. Furthermore, while there is legitimate doubt about China’s ability to hit the ambitious targets set out in the deal, its commitment to increase imports from the U.S. could also raise U.S. exports relative to the past year.

The aforementioned outlook however, will be increasingly tested. Just as one source of uncertainty is fading, another is intensifying. This week the World Health Organization labelled the coronavirus outbreak a global health emergency. From an economic perspective, measures to contain the virus will act as a drag on China’s economy in the near-term. Some of this activity – namely spending on services that are heightened around the Chinese New Year – will not be made up in future quarters. Still, assuming containment measures are successful, past experience with SARS suggests that the economy will return to normal within two or three quarters.

Since China makes up close to a fifth of the global economy, the near-term slowdown will weigh on growth. Precisely how big that negative impact will be, will depend on the spread of the virus, the economic reach of impacted areas, as well as market sentiment and the evolution of financial conditions. The outbreak is currently weighing on investor sentiment, with a shift into safe assets (i.e. bonds) continuing this week. The resulting pressure on longer-term yields has caused the U.S. yield curve to invert again (Chart 2). While the lower interest rate environment may help stimulate some channels of the U.S. economy as the Fed assesses the situation (the Fed held rates steady this week), the anxiety illustrated in the inverted yield curve could accentuate the negative feedback loop. 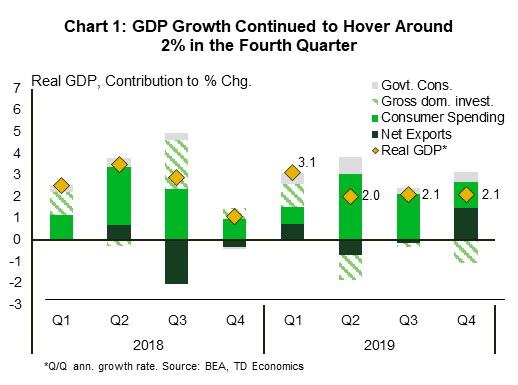 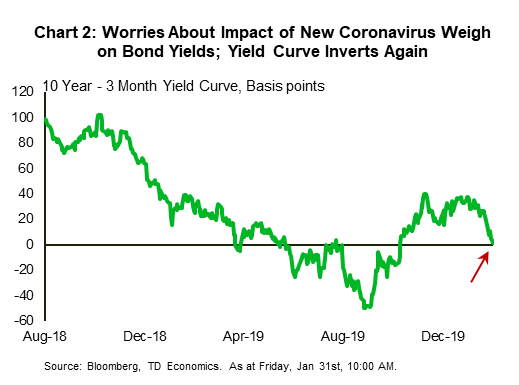 Canada – A Temporary Sigh of Relief

This was a busy week for Canadian financial markets. Front and center were escalating concerns around the coronavirus outbreak. The resultant risk-off sentiment continued to dominate, with the S&P/TSX Composite following its global peers lower (-1% on the week as of 10 AM). Given their sensitivity to Chinese demand, energy and base metal commodities were hard-hit. Indeed, the WTI oil benchmark is down another 4% this week and has fallen more than 15% from its peak in early January.

Domestically, November’s GDP release was the highlight, with month-on-month growth coming in above expectations at 0.1% (Chart 1). While this is still a soft print, it is a sigh of relief when taken in the context of transitory headwinds and the string of unfavourable data seen in November. Indeed, these temporary factors (for instance, the CN rail strike) left the transportation and natural resource extraction sectors down 0.9% and 1.4% on the month, respectively. Supporting November’s uptick was a surge in the utilities sector (+2.1%) on the back of colder-than-usual weather. However, the expansion was reassuringly broad-based, with growth seen in 15 of the 20 industries. All told, the better-than-expected release leaves our tracking for the fourth quarter positive at 0.3%, in line with the Bank of Canada’s updated estimate.

The escalating coronavirus threat is another potential headwind. While too early to tell, our Chief Economist’s early assessment assumes a limited impact on the Canadian economy for the year as a whole. Currently, a swift response and yesterday’s WHO announcement will likely keep the virus more geographically contained. However, financial market sentiment and commodity prices will likely remain restrained until uncertainty is reduced. In addition, direct impacts such as reduced air travel may weigh on activity in the first quarter of the year.

The string of lackluster economic data and evolving headwinds leave the Bank of Canada in an unenviable spot. On that note, yesterday’s speech by Deputy Governor Paul Beaudry served to reaffirm the central bank’s longstanding dilemma in assessing its monetary policy decision against elevated household debt levels and related financial stability implications. The trade-off explains why the central bank remained on the sidelines in 2019. However, as discussed in our latest Dollars & Sense these elevated household debt levels may exacerbate the downside impacts on consumer spending in the case of a slowdown. Additionally, the suite of macro-prudential policies (such as B-20) are excepted to drive an ongoing improvement in the quality of the debt stock. As such, these factors, combined with the string of weak economic data and evolving global headwinds mean that a rate cut in the second quarter of the year is still on the table. 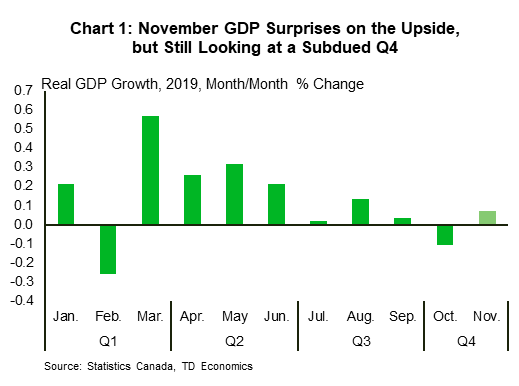 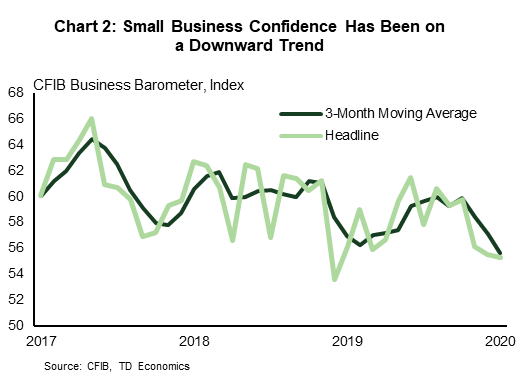 We expect the manufacturing ISM index to be lifted back toward 50 in January by more positive sentiment following the Phase One trade deal. We expect that lift to offset negative news on Boeing. Even 50, our forecast, is relatively weak in an absolute sense, but it would be up from 47.8 in December (and 47.2 in the original report). Most of the regional manufacturing surveys that have been reported for January have signaled improvement, with the Chicago survey the main exception. For comparison, the ISM index averaged 51.2 in all of 2019, down from 58.9 in 2018. 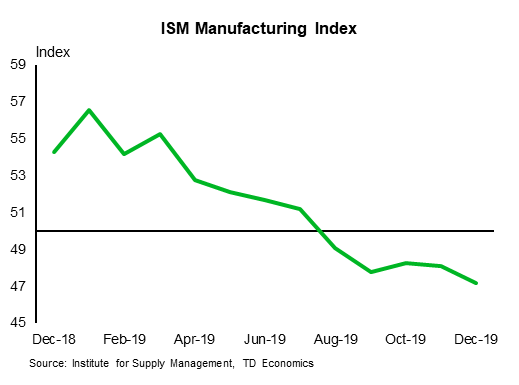 We expect a mild-weather boost to payrolls to be offset by payback in retail hiring and a somewhat weaker trend after the annual revision, but the January data are especially subject to surprise due to huge seasonal swings. Before seasonal adjustment, payrolls typically drop by about 3 million in January. Regarding the annual revision, the BLS has already indicated that payrolls gains will be revised down by about 40K per month in the year through March 2019, but we expect some downward revisions to more recent data as well. As of now, the payrolls data show a 176K average for gains in 2019, down from 223K in 2018. We expect the unemployment to hold at 3.5%. We forecast a 0.3% rise in average hourly earnings, with the 12-month change edging up to 3.0% from 2.9%. 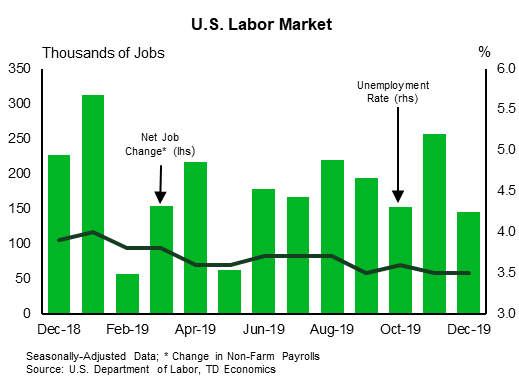 TD looks for the international merchandise trade deficit to narrow to a modest $100m in December, down from $1.1bn in the prior month, owing to a sharp increase in nominal energy exports. Crude oil prices rose by ~5% m/m in December, which alongside a pickup in real energy shipments should provide the driving force for total exports with motor vehicles exports expected to see little change. Elsewhere, CN Rail’s return to normal operations should provide a modest tailwind after labour disruptions weighed on rail traffic during the month of November. On the other side of the ledger, we expect a more muted performance for imports owing to soft domestic demand and a poor reading on advance US exports. 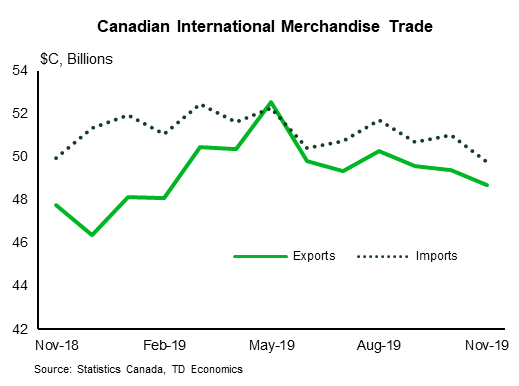 The Canadian labour market is expected to begin 2020 on a subdued note, with employment forecast to rise by 10k in January on the heels of a (downwardly revised) 27k increase for December. Even though the Bank’s Business Outlook Survey showed solid hiring intentions in Q4, the balance of opinion for small businesses has started to deteriorate. Job growth of 10k is consistent with the current six-month trend (12k) and we look for full-time positions to lead the advance given the persistence of labour shortages. More subdued job growth alongside an expected rebound in the labour force (-21k in Dec) will put upward pressure on the unemployment rate, which we expect to rise to 5.7%, while base-effects should result in a deceleration in wage growth to 3.6% y/y. 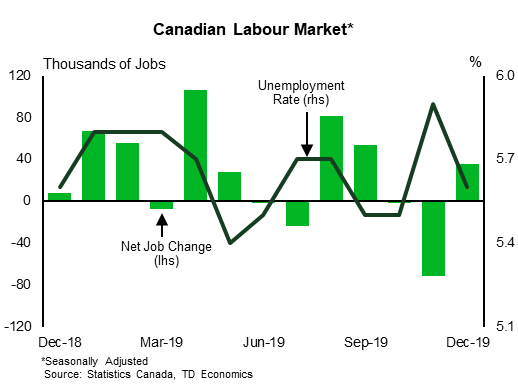