As the coronavirus pandemic continues to wreak economic havoc across the globe, the pressure is on central banks to provide more stimulus amid the fast deteriorating outlook. The US Federal Reserve has already made an emergency rate reduction and is widely anticipated to follow it up with another cut next week. The Bank of Japan will be a more interesting one, however, as, although some action is certain, investors aren’t quite sure what form it will take. One central bank that is less likely to announce any change in policy is the Swiss National Bank, despite the Swissie’s recent appreciation.

Jobs data coming up in Australia and UK

Announcements of fiscal stimulus in both Australia and the United Kingdom failed to bolster either the aussie or the pound this week, with both currencies maintaining their downward bias against the US dollar. It’s even less likely therefore that any positives in next week’s jobs numbers would do much to ease the selling pressure as investors’ sole concern right now is what the economic costs of the coronavirus will be and how quickly it can be contained.

The UK employment report for January is out on Tuesday and Australia will publish its figures for February on Thursday. Labour markets in both countries withstood the economic slowdown in 2019 and probably stayed resilient in January/February as well. However, any weakness in the data, especially in Australia’s numbers that are more up to date, could further weigh on the respective currencies. 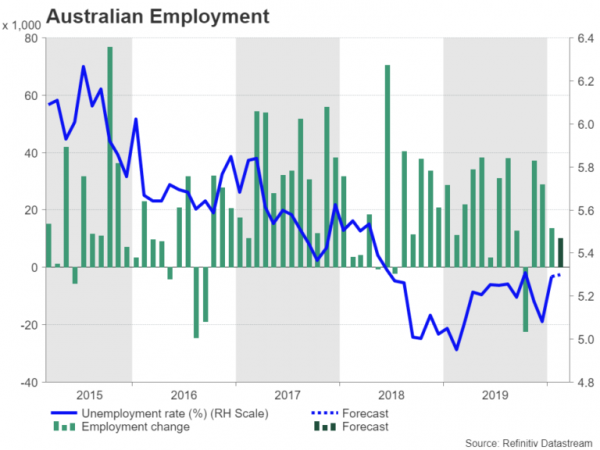 The Reserve Bank of New Zealand has yet to respond to the coronavirus crisis and GDP growth numbers due next week could influence the size of a potential rate cut. Although the GDP report will be for the final three months of 2019, if the economy didn’t perform as well as expected during the period, the RBNZ will be less hesitant to go for a 50 basis points cut on March 25 instead of a 25 bps one.

A GDP miss therefore on Thursday still poses a downside risk for the New Zealand dollar, which touched fresh 11-year lows this week. On the other hand, a better-than-expected growth figure would do little in halting the kiwi’s slide given how the outlook is being dictated by the virus outbreak.

Loonie to be impervious to domestic releases

Similarly in Canada, the local dollar is not anticipated to receive much of a lift from upcoming data, which will include manufacturing sales for January on Tuesday, February inflation on Wednesday and retail sales figures for January on Friday.

The Canadian economy hit a few rocks in January and February even before the virus fallout had become evident and so there’s a good chance next week’s releases will disappoint. However, the Bank of Canada will probably cut rates again regardless of how strong or worrying the data are, having slashed rates earlier this month. Markets have priced in a nearly 75 bps cut for April, meaning the Canadian dollar could soon be headed for the C$1.40 level to tap fresh four-year lows.

Fed to cut again, but by how much?

With US politicians lacking the urgency to draw up a fiscal stimulus plan to deal with the pandemic, the Fed is carrying the entire burden of having to resuscitate the US economy. Investors have pushed up their expectations of a rate cut to nearly 100 basis points as the virus fallout only seems to be worsening. But whether the Fed will be quite so aggressive is another matter. Policymakers may prefer to save some rate ammunition for later and complement a more moderate rate reduction with measures to provide liquidity to businesses crippled by the crisis. It’s also possible the Fed might launch a new round of quantitative easing to address liquidity shortages in the money markets. 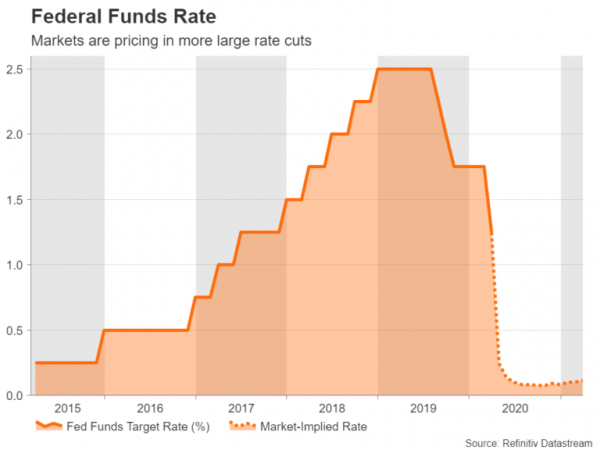 A smaller-than-expected rate cut on Wednesday is likely to help the dollar regain its footing, while a large monetary stimulus package could tip it lower again.

But as the virus outbreak continues to dominate market trading, economic indicators will probably struggle to attract much attention. The main data on the US calendar over the next seven days are the Empire State manufacturing index on Monday, retail sales and industrial output numbers on Tuesday, building permits and housing starts on Wednesday, the Philly Fed manufacturing index on Thursday and existing home sales on Friday.

Will the Bank of Japan ease?

The Bank of Japan will announce its decision on Thursday, a day after the Fed, and looks set to join its global peers in announcing additional stimulus. But while speculation is abound that the BoJ will not sit on the sidelines at this meeting, whether policymakers can surprise the markets with strong measures is not so certain. The most probable scenario is that the BoJ will increase its purchases of exchange-traded funds (ETF) to stem the decline in Japanese stocks and restore some confidence.

But whatever the Bank decides, a rate cut does not appear to be on the cards and so it’s difficult to imagine the yen slipping after the decision, especially as the heightened risk aversion isn’t about to subside anytime soon.

For the same reasons, traders will likely ignore the data due out of Japan next week, which will consist of January machinery orders on Monday, trade figures on Wednesday and inflation on Thursday, both for February.

SNB not expected to cut rates

The Swiss National Bank also meets on Thursday but is the least likely of the three central banks to make any changes to its policy. At -0.75%, Switzerland already has the lowest interest rate in the world and although the country has been hit hard by the coronavirus, the SNB has another weapon at its disposal – FX intervention. The SNB’s foreign exchange reserves were up slightly in February, indicating that it was intervening to keep the safe-haven Swiss franc down, particularly against the euro, as risk sentiment soured due to the virus outbreak. 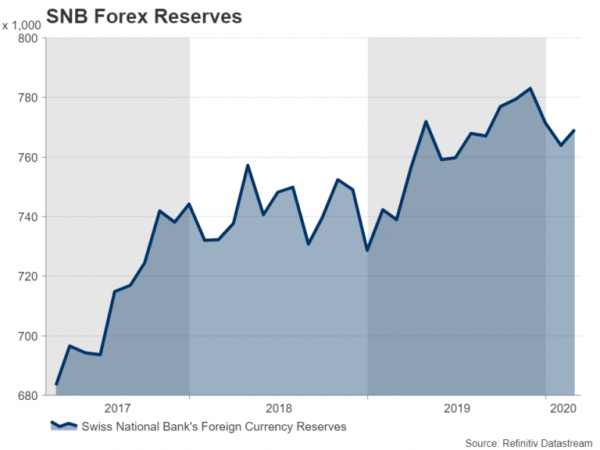 But with the ECB having kept its interest rates unchanged this week, there is less of a need for the SNB to lower rates deeper into negative territory and will probably just toughen its language on the exchange rate.

Aside from the deepening crisis from the coronavirus, it will be a relatively muted week in the Eurozone, with the only highlights being the ZEW business survey out of Germany (Tuesday) and the Eurozone’s final CPI readings for February (Wednesday). 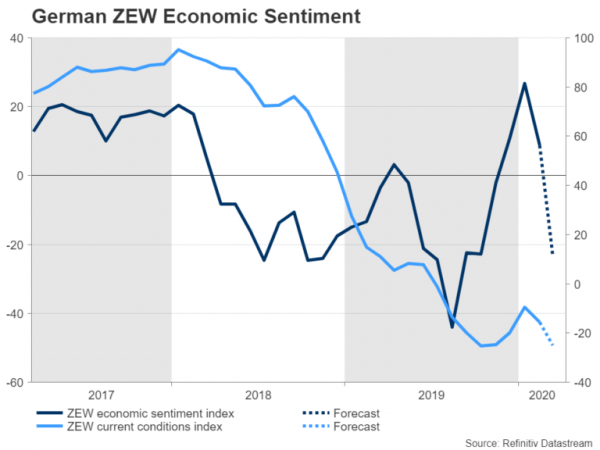 The ZEW economic sentiment index, out on Tuesday, is forecast to plunge from 8.7 to -23.4 in March, underscoring the view that business morale has suffered a huge knock from the disruptions caused by the virus outbreak. A worse-than-expected number could further jeopardise the euro’s recovery versus the dollar, which faltered after the European Central Bank disappointed by not delivering a big enough stimulus at its March meeting.