The CAD strengthened against the USD yesterday, as oil prices tended to rise due to the easing of the lockdowns imposed in various countries. Analysts tend to note that the market seems to price in the idea that the situation is to continue to improve and tends to grow more optimistic. As was expected, such an improvement could provide further support for oil prices as world demand for fuel may start to rise once again. At the same time, it should be mentioned that production of oil seems to have been reduced substantially over the past few weeks and may drop even further as the OPEC production curbs come into play. On the monetary front, that BoC Deputy Governor Wilkins reiterated the bank’s readiness to support the Canadian economy with asset purchases. If oil prices continue to rise, the Loonie could strengthen even further, while Canada’s trade data for March could also be catching the eye of CAD traders. USD/CAD dropped yesterday, aiming for the 1.4050 (S1) support line. As the pair broke the upward trendline incepted since the 30th April, we switch our bullish outlook in favor of a bearish one. Should the bears actually take control over the pair’s direction we could see it breaking the 1.4050 (S1) support line and aim for the 1.3970 (S2) hurdle. If the bulls are in charge of the pair’s direction, we could see the pair breaking the 1.4175 (R1) resistance line in search of higher grounds.

As was expected, RBA remained on hold maintaining rates at +0.25%, yet the AUD seemed to weaken a bit at the time of the release. In its accompanying statement the bank maintained a dovish tone and mentioned that the global economy is experiencing a severe downturn while the Australian economy is going through a very difficult period. The bank continued to note that there is considerable uncertainty and it expects output to fall by 10% over the first half of 2020 and by 6% over the year as a whole. We see the overall picture of the bank’s stance as mostly unchanged and its bleak view of the Australian economy could weaken the AUD. Aussie traders though, may be keeping an eye out for tomorrow’s release of the retail sales growth rate for March. The rate is expected to accelerate substantially, yet it may be just mirroring a goods hoarding effect, which may have occurred in the Australian economy in March. Should the positive sentiment of the market for commodity currencies continue, it could provide further support for the AUD. On the other hand, we tend to maintain worries for a further escalation of the tensions in the US-Sino relations. Should the situation escalate further, we could see the market sentiment once again turning against the Aussie as a commodity currency, as international trade would once again be under threat, while at the same time the Australian economy could suffer another hit as it has a great exposure to China. AUD/USD bounced n our 0.6385 (S1) support line and rose yesterday. As the pair broke its downward trendline incepted since the 30th of April, we switch our bearish outlook in favour of a bullish one. Should the market actually favour the pair’s long positions, we could see it breaking the 0.6490 (R1) line and aim for the 0.6615 (R2) hurdle. On the flip side should the pair come under the selling interest of the market, we could see it breaking the 0.6385 (S1) support line and aim for the 0.6280 (S2) support level. 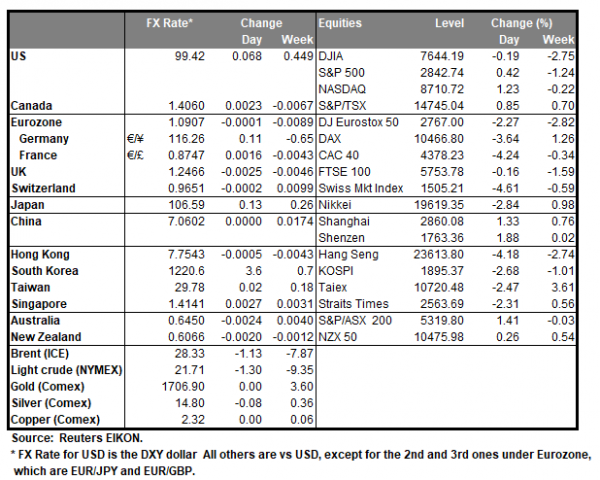 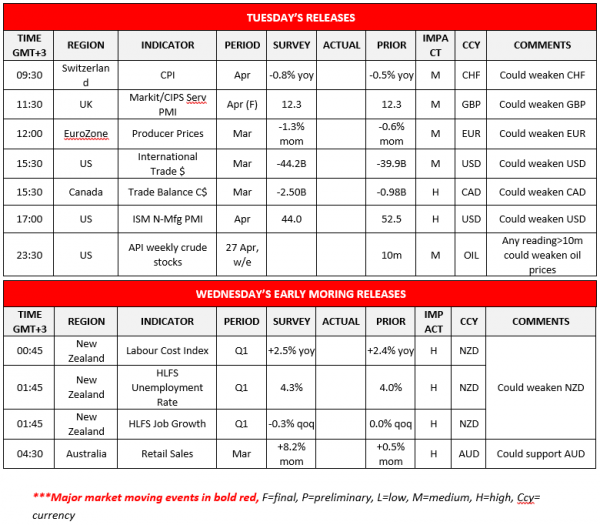