The USD strengthened against a number of its counterparts yesterday and during today’s Asian session as the frictions in the relationships between the US and China seem to escalate. Tensions in the US-Sino relationships escalated further on a number of issues, this time including China’s relationships with its city of Hong Kong and its response to the coronavirus pandemic. New protests seem to be planned in Hong Kong, as China wants to enact a national security legislation, increasing uncertainty for the financial hub. US senators seem to prepare to sanction Chinese officials for violating Hong Kong’s independence on a bipartisan line, which could escalate US-Sino tensions further. China repeated its pledge to implement the first phase of the US-Sino trade deal despite setbacks from the coronavirus outbreak and the escalation of the tensions mentioned. Should we see further tensions in the US-Sino relationships we could see further safe haven inflows for the USD as predicted yesterday, while at the same time commodity currencies such as the CAD and the AUD could continue to lose ground. Especially the CAD, which was also under pressure as oil prices dropped suddenly this morning due to China abandoning its GDP target as per analysts. CAD traders may also have an eye out for today’s release of Canada’s retail sales for April and the release may have a bearish effect for the CAD, while the Loonie may be also influenced by the course of oil prices. USD/CAD rose yesterday and during today’s Asian session, breaking the 1.3970 (S1) resistance line, now turned to support. The pair’s price action seems to be forming an upward trendline since yesterday, yet we would feel more comfortable seeing some more candlesticks confirming the trendline before we call the outlook bullish. Nevertheless, the upward direction of the RSI indicator below our 4-hour chart seems to suggest an upper hand for the bulls as well as the fact that the pair broke the upper boundary of its past sideways movement. Should the bulls actually take charge of the pair, we could see it aiming if not breaking the 1.4050 (R1) resistance line in search for higher grounds. Should the bears take over, we could see the pair breaking the 1.3970 (S1) support line and aim for the 1.3865 (S2) support level.

The pound remained largely flat against the USD and the EUR yesterday, despite better than expected financial data while the specter of BoE employing negative rates tended to weigh on the sterling. Despite yesterday’s preliminary PMIs for May, being better than expected and improving somewhat the overall picture from April’s nosediving of the UK economy, they still reported a substantial contraction of economic activity. Media and analysts tend to mention that the pound may have remained under pressure as UK five-year government bond yields into the negatives for the first time on Thursday, a day after Britain sold its first government bond with a negative yield. At the same time the market continues to price in the possibility of BoE lowering its rates into the negatives especially after BoE Governor Bailey’s refusal to rule out the idea the previous days while Brexit uncertainty remains elevated and tends to deter investors. We expect pound traders to turn their attention towards the release of UK’s retail sales for April early today. GBP/USD showed little gains yesterday as the pair failed to make substantial progress and returned to test the 1.2200 (S1) support line. Hence, we maintain our bias for the pair remaining under pressure. Should cable be under the selling interest of the market we could see it breaking the 1.2200 (S1) support line and aim for the 1.2015 (S2) support barrier. Should the GBP/USD’s long positions be favored by the market we could see cable bouncing on the 1.2200 (S1) line and aim if not break the 1.2400 (R1) line.

Today we get UK’s and Canada’s retail sales rates for April, while later we also get from the US the Baker Hughes oil rig count. As for speakers please note that ECB’s Philip lane speaks. 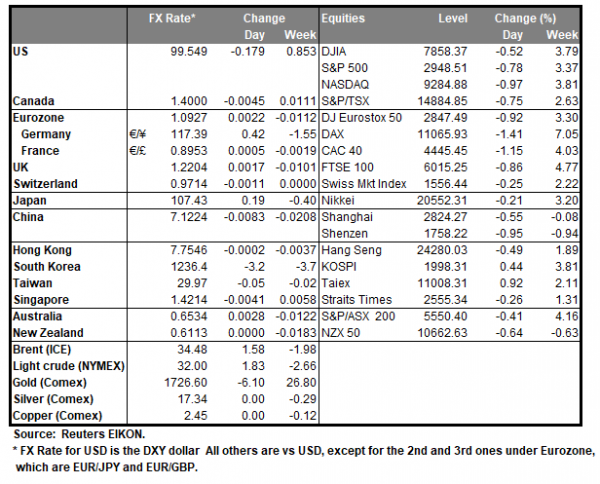 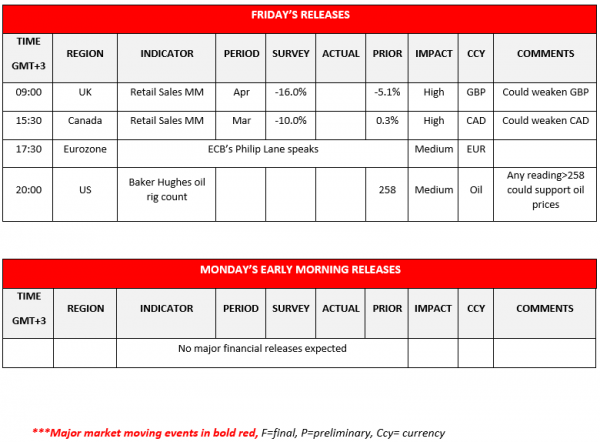