Virus recovery hopes have gotten a boost after preliminary PMI readings for May rebounded more strongly than expected, underscoring the market optimism. But with economic releases set to quieten down in the coming week, Washington’s increasingly hostile language against China threatens to upset the dubious risk-on theme. Any panic-driven sell-off in risk assets could be accentuated from another anticipated plunge in personal consumption and durable goods orders in the US, which will be the main data highlights of the next seven days.

US ups pressure on China, yet aussie makes fresh highs

The Australian dollar appears to be oblivious to rising tensions not only between the United States and China but also between Australia and China. The prospect of a rekindled trade war is being eclipsed by expectations that the world’s biggest economies will enjoy a V-shaped recovery in the second half of 2020, supported by some encouraging results from vaccine trials. But there is a real risk that markets are underestimating the level of anger towards China in Washington, a feeling shared across all political spectrums, hence, as things stand, future flare ups are more likely than not.

Nevertheless, the rebound in risk appetite is proving more resilient than the worrying economic backdrop would suggest and the aussie even managed to unlock a key resistance, as investors turned more confident about the outlook for the Australian and global economy. Assuming the optimism holds, next week’s releases out of Australia are unlikely to dent the aussie’s northward charge.

Quarterly figures are due on construction (Wednesday) and capital expenditure (Thursday), which should provide strong clues as to how the economy performed in the first quarter and whether Australia suffered a similar large contraction as that’s been reported in China, Europe and the US.

The Canadian dollar is struggling to make much headway despite a strong rally in oil prices over the past week and broadly positive sentiment in the markets. The loonie’s uninspiring reversal from its March lows is even more unusual when considering that investors are not pricing in negative interest rates by the Bank of Canada, although there has been some speculation about it. Doubts about the strength of an impending recovery as Canada’s lockdown is relaxed could be one reason holding the loonie back as the outlook for the energy sector – the economy’s growth engine – remains bleak even if the oil glut has eased somewhat for now. 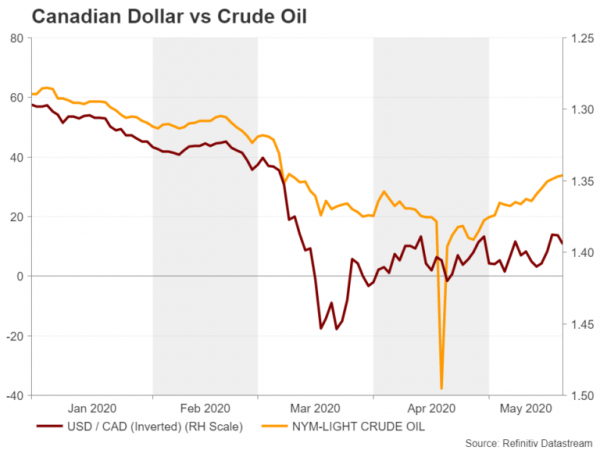 Next week’s GDP estimate for the first quarter will probably not do much in changing that negative picture, hence the loonie could remain capped by the C$1.3850 barrier for a while longer.

In Japan, with the economy now technically in a recession, industrial production and retail sales figures for April will attract some attention on Friday. Both industrial output and retail sales are forecast to have plummeted in May, by 5.1% and 11.5% month-on-month, respectively, pointing to a third straight quarter of declining GDP. Unemployment numbers are also out the same day, with the jobless rate predicted to have edged up to 2.7% in May. 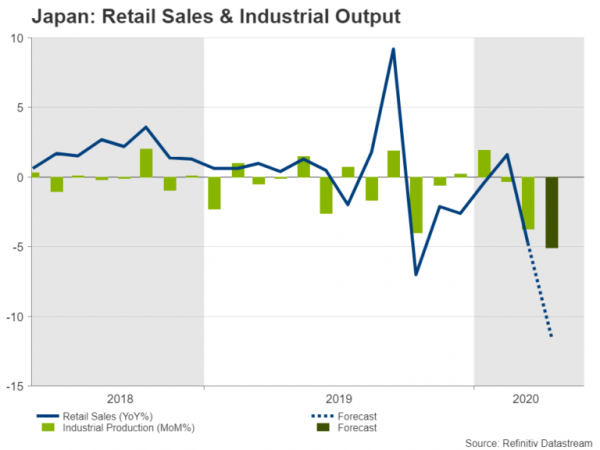 However, it’s hard to see the yen responding much to any surprises in the monthly stats as the Bank of Japan has already ramped up its stimulus and virus emergency programs and looks set to maintain ultra-loose policy for years to come.

Euro perks up but bumps into obstacle

Plans for a substantial EU rescue package took a step closer to becoming reality this week when France and Germany proposed a €500 billion virus recovery fund, propelling the euro higher. Better-than-expected flash PMI numbers out of the Eurozone provided an additional lift but the single currency has already hit a wall around $1.10 and the absence of any big releases in the coming days means the rebound may stall.

Germany’s closely watched Ifo business climate gauge is first on the agenda on Monday and forecasts are for a slight increase in the index. The euro area’s Economic Sentiment Indicator out on Thursday will likely also keep in trend with the PMIs to show improving business morale in May, albeit only marginally. On Friday, the flash inflation estimate for May is expected to show the harmonized consumer price index remained dangerously close to deflationary territory at 0.3% year-on-year. 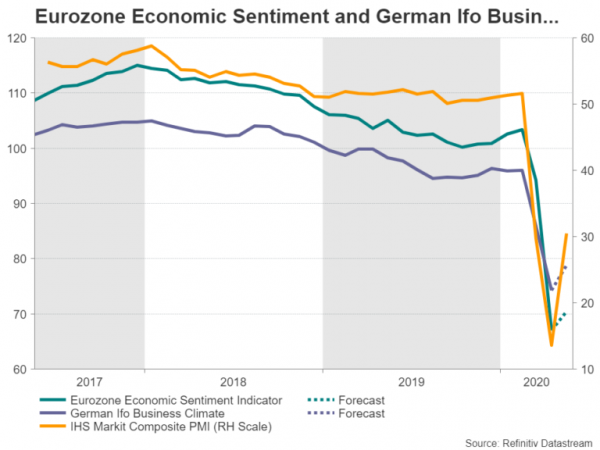 The US dollar has been trading sideways since late March, riding the tide of wavering risk sentiment. Its reluctance to puncture the bottom of this range demonstrates investors are not ready to part with the world’s most liquid currency in significant volumes. The rally in gold further supports the case that traders do not yet see a dramatic turnaround in the economic outlook and that’s no surprise given the dire data being reported in the world’s largest economy.

Although some forward-looking business surveys may have started to point upwards, it’s still important to understand how steep the mountain that needs to be climbed will be. And all indications are that the world is facing a loss of output of historic proportions, including the US.

Kicking off the depressing stream of data, the Conference Board’s consumer confidence index is out on Tuesday, with forecasts of a small dip to 85.5. New home sales are also due on Tuesday and will be followed by durable goods orders on Thursday. Durable goods orders are expected to have tumbled by a double-digit figure for a second straight month, falling by 15% m/m in April. The second estimate of GDP growth for Q1 is released on Thursday too with no revision anticipated to the preliminary -4.8% annualized quarterly print.

On Friday, the Chicago PMI and the University of Michigan’s final consumer sentiment reading for May are due, but the focus will be on the personal income and spending numbers. Americans are expected to have suffered an 8.3% m/m drop in personal income, while personal consumption is projected to have collapsed by 9.7% m/m, beating the prior month’s record fall of 7.5%. 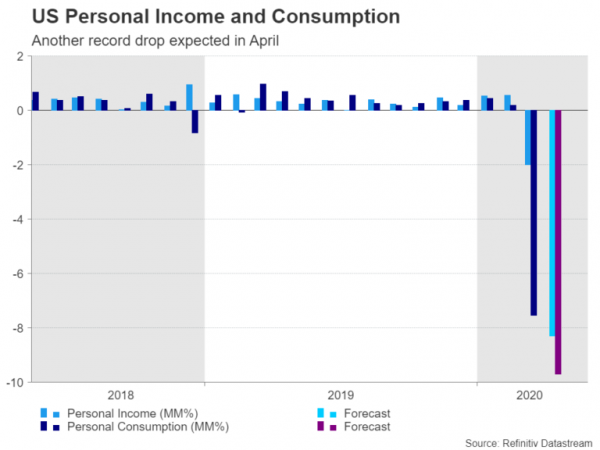 Personal consumption makes a large component of GDP calculations so the April number will be a good barometer for the scale of economic contraction to expect in Q2.