The coming week is action-packed, with three central bank meetings, the resumption of critical Brexit talks, and the release of the US jobs report. The ECB looks primed to expand its QE program but paradoxically, that may not hurt the euro. Neither the Reserve Bank of Australia nor the Bank of Canada is unlikely to act – those currencies could be driven mainly by risk sentiment and US-China tensions. Meanwhile, although markets ignored scary economic data on the way down, the same might not hold if data surprise positively, which presents an asymmetric risk for the dollar.

The European Central Bank (ECB) will decide on Thursday whether to expand its new pandemic-fighting QE program, and recent remarks by key officials like the Bank of France Governor suggest that’s a strong possibility. At the current pace of bond purchases, the 750bn euro allocated to this program could run out by September-October, so the real question is whether the ECB will enlarge it now or wait until a later meeting.

From a risk management perspective, it makes more sense to act now. President Lagarde recently said the recession has been deeper than initially expected and is more in line with the central bank’s most pessimistic scenarios of GDP falling by about 8% – 12%, calling the mild scenario of just a 5% contraction ‘outdated’.

Waiting wouldn’t accomplish much. In fact, it could be counterproductive as it might raise speculation about whether the program will be expanded at all, tightening financial conditions and undermining the ECB’s previous stimulus efforts.

Normally, more stimulus would argue for a negative reaction in the euro, but these aren’t normal times. When the ECB first enacted this pandemic-QE back in March, the euro actually rose on the news, as the additional stimulus diminished the risk of stress in bond markets like Italy’s. It might be a similar story this time, with the positive effects of fading financial risk overpowering the negative effects of slightly lower interest rates, potentially lifting the euro. 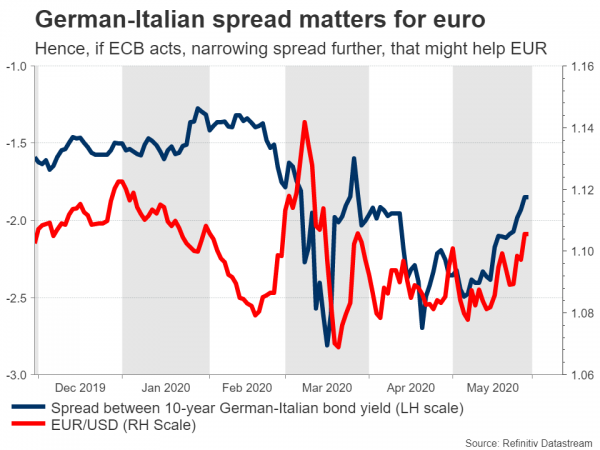 Yet, the bigger driver for the currency will be the talks among EU countries about the recovery fund. Austria, the Netherlands, Sweden, and Denmark are opposed to giving grants to nations like Italy that won’t be repaid and instead want to give out loans, but they are open to negotiations. For the euro to be able to sustain any gains, it might also need positive signals about some deal getting done ahead of the EU’s June 18 meeting.

Economic data have been mostly ignored by the market lately, under the logic that the carnage has been signaled well in advance and that the powerful stimulus by governments and central banks will set the stage for a quick recovery.

But while investors ignored the scary data on the way down, that might not be the case if the figures start to improve from depressed levels going forward. In this sense, the risks surrounding the dollar from the upcoming US employment data on Friday seem asymmetric and tilted to the upside.

Nonfarm payrolls are expected to fall by 7.45 million in May, far less than the 20.5 million plunge in April, but still a very worrisome number. That’s expected to push the unemployment rate up to 19.8% from 14.7% in April. 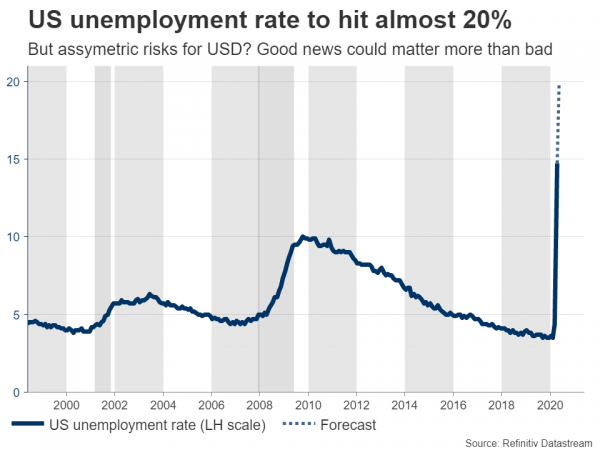 If the numbers are even worse than expected, investors might shrug it off as just another piece of bad news for May, which everyone already knows was disastrous. Hence, if the greenback drops on the news, the losses could be relatively limited. On the contrary, if the data are stronger than expected, that might signal that even May – possibly the peak of the recession – wasn’t that terrible, and perhaps trigger a more powerful upside reaction in the dollar.

Ahead of Friday’s payrolls, there’s also the ISM manufacturing PMI for May on Monday, and the non-manufacturing index on Wednesday. The ADP employment report on the same day will give us a taste of what to expect from Friday’s official jobs data.

RBA unlikely to move, all eyes on China tensions

The Governor of the Reserve Bank of Australia (RBA) sounded surprisingly upbeat recently, suggesting that the decline in jobs could now be 15% instead of 20% as initially feared, and that there are signs of a bottoming out in the labor market. His tone wasn’t that of a central banker preparing to add more stimulus. 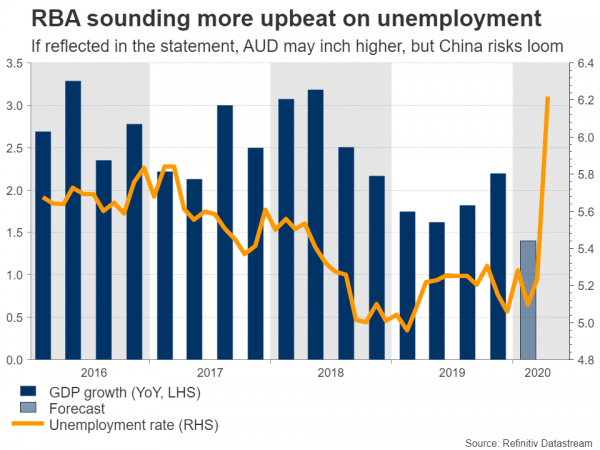 Markets also think the RBA is done with this easing cycle, pricing in a very small probability for rate increases going forward, not rate cuts. If this cautious optimism is reflected in the upcoming RBA decision on Tuesday, the aussie could inch a little higher. That said, the overall driver for the currency will be how risk sentiment evolves, and how the tensions between the US and China play out.

On the data front, Australia’s GDP numbers for Q1 are due Wednesday but are probably ‘old news’, as are Thursday’s retail sales for April, since a preliminary estimate has already been released.

BoC: Getting to know the new Governor

The Bank of Canada (BoC) will announce its own decision on Wednesday and while no action is expected, investors may tune in to get a glimpse of the new Governor’s views on policy. Does Tiff Macklem think that doing too much stimulus is better than doing too little? Or does he believe the BoC has done enough already? 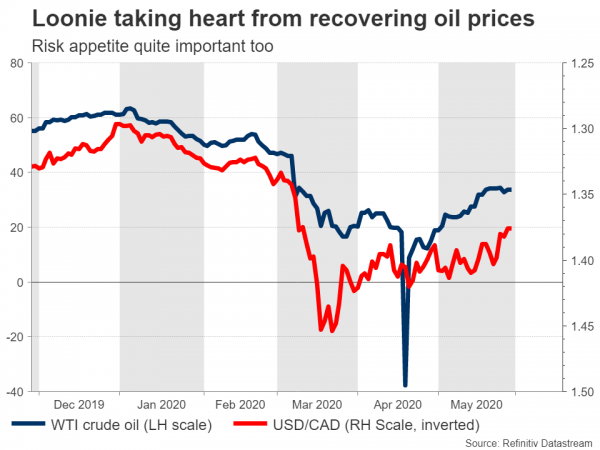 This isn’t the time to appear hawkish, so Macklem will probably prefer to err on the dovish side for now. If he doesn’t rule out things like negative rates for example, that would argue for a negative reaction in the loonie. In the bigger picture though, much will depend on how oil prices and risk appetite evolve.

Canada’s employment data for May will also hit the markets on Friday.

Finally, in the UK all eyes will be on the final Brexit negotiating round ahead of the June 30 deadline when Britain must decide whether it wants an extension to the transition period. If not, a no-deal Brexit at the end of the year becomes the default.

Boris Johnson has been adamant that he won’t seek an extension, and while this may be a negotiating tactic to extract concessions, it’s still difficult to have any confidence in the pound ahead of what promises to be a drama-packed month. If no-deal fears return, that could also undermine the euro, albeit to a lesser extent than the pound.

Surge in Canadian Employment in June