With gold reaching a record high, and safe-haven currencies more volatile than ever,  upcoming financial releases are expected to add to market turbulence

With worries for a possible levelling-off of the recovery of the US economy due to the high COVID 19 infection rate being present, we are about to enter the new week. Please note that indicative of the market worries was the rise of gold’s price which reached a multi high by breaking the $1800 barrier. Also, the further deterioration of the US-Sino relationships along with Brexit and EU’s fiscal stimulus plans made headlines moving the markets. In the coming week we at IronFX expect financial releases to come to the forefront after last week’s recess, as we have a packed schedule full of important releases from various parts of the world. Also, monetary policy for various areas is to take a spotlight, as we have the BoJ, BoC and ECB releasing their interest rate decisions. Those with a deep understanding of what is forex will know these developments are expected to lead to major movements in FX markets.

USD – US-Sino relationships and COVID-19 remain in the epicenter
US fundamentals tended to revolve around the COVID 19 infections in the US and the pace of the economic rebound of the US. On Thursday, worries intensified that the US economic recovery may level off as COVID 19 infections rose above 60k on a daily level, while the country has now surpassed the milestone of 3 million infections. Fed officials, throughout the week tended to express worries for the possible adverse effects of the infection rate on the US economy. Fed officials are scheduled to speak throughout the week and there may be some calls for further action from the Fed. US-Sino tensions are also present in USD’s fundamentals as they tend to escalate further. The escalation of tensions derives from a number of bilateral differences, deepening the uncertainty in the markets and perplexing US, as well as international market fundamentals. It’s characteristic that in a latest move, the US sanctioned chinese officials, among them a member of the Politburo of China’s Communist Party, which could be regarded as highly provocative by the Chinese. We expect the tensions to escalate further and could create safe-haven inflows for the USD as uncertainty tends to rise in such a case. As for financial releases from the US, we tend to highlight on Tuesday the CPI rates, on Wednesday the industrial production, on Thursday the retail sales and on Friday the preliminary University of Michigan Sentiment, all for June. Also note the release of the weekly initial jobless claims figure on Thursday. Also, regarding the US, it should be noted that in contrast with other US stock-markets, the Nasdaq had an impressive run over the past week, reaching new record highs. 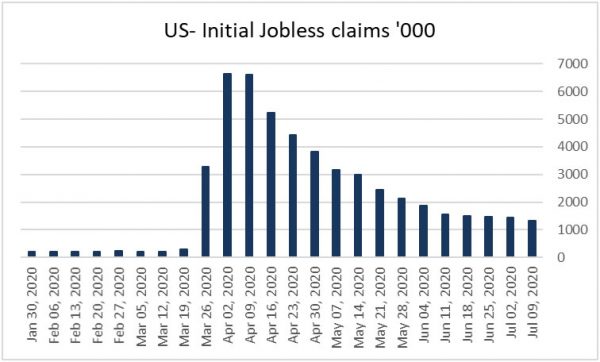 The main event for the pound in the past week, may have been UK finance minister Sunak’s mini budget announcement on Wednesday. The fiscal stimulus package announced, amounts to a total of £30 billion and is focused on employment and tourism. Yet, as a substantial amount of the measures are aiming to encourage increased private spending through tax and bonus incentives, the economic impact of the package may be materially higher than its estimated costs. An issue troubling the pound is the post-Brexit trade relationship of the EU with the UK. A breakthrough in the negotiations seems to remain elusive and market anxiety may be rising as the stakes are high. Comments made by EU’s top Brexit negotiator Barnier, were characteristic, as he stated that “significant divergences” remain between the two parties. Even more worrisome were the comments made by EU and UK leaders pointing towards a possible no deal scenario. On the monetary front, BoE governor Bailey is scheduled to speak on Monday, Thursday and Friday, while also other BoE officials on other days of the week and could create some volatility for the pound. As for financial releases from the UK we note the GDP rates for May on Tuesday, the CPI rates for June on Wednesday, and May’s employment data on Thursday. 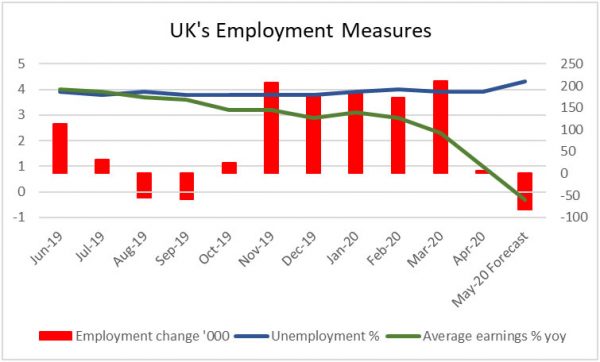 Worries continue to surround the CAD, especially for Canada’s economic outlook. A Bank of Canada survey revealed that the business sentiment remains strongly negative, despite the easing of the coronavirus restrictions. Also, the failure of oil prices to rise substantially further than the limit of US $40 per barrel (for WTI), may be discouraging. We expect CAD traders to keep an eye out for oil prices in the coming week as well. On the flip side, any improvement of the employment data for June, could create some optimism that the Canadian employment market is bottoming out. Loonie traders are expected to shift their focus to BoC’s interest rate decision on Wednesday. The bank is widely expected to remain on hold at +0.25% and currently CAD OIS imply a probability of 99.08% for such a scenario. We expect the bank to maintain its supportive role for the Canadian economy and should some slight optimism for the recovery of the Canadian economy be present, we could see the Loonie getting some support. Also note that volatility for CAD pairs could be maintained during BoC Governor Tiff Macklem’s press conference later on.

The common currency experienced substantial volatility during the past week, against the USD. EUR traders could be focusing on the EcoFin virtual meeting today, which could create headlines regarding the EU €750 fiscal stimulus plan ahead of the EU summit next Friday. Objections by the “frugal four” (Sweden, Netherlands, Denmark and Austria) seem to remain and any indications that a deal remains out of reach, could disapoint EUR traders, possibly causing the common currency to drop. Statements on the issue were intense in the past, so the confrontation may also be hard, creating headlines through the coming week. Also on the monetary front, ECB’s interest rate decision, is expected to draw EUR trader’s attention on Thursday. The bank is widely expected to remain on hold, keeping the refinancing rate at 0.0% and the deposit rate at -0.50%. Currently EUR OIS imply a probability of 92.71%, for such a scenario. However expectations are for the bank to expand its Pandemic Emergency Purchases Program by the end of the year. Yet as ECB’s President Christine Lagarde stated in a recent interview, there is no hurry to rump up stimulus again, so we have little expectations for such an extension in the bank’s next meeting. We consider the EUR-area is still not out of the woods, so some cautious tone is to be expected. Also note Christine Lagarde’s press conference later on. Please note that during the release as well as Lagarde’s press conference EUR pairs may experience unusual volatility. As for financial releases one could highlight the final HICP rates for June, yet we tend to focus more on Germany’s ZEW indicators for July on Tuesday. 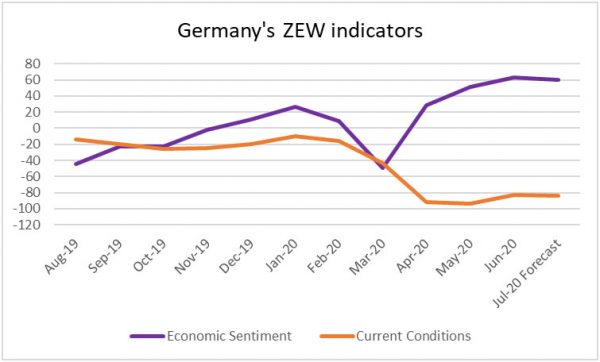 JPY – Will BoJ show some optimism?

JPY has been moved by safe haven flows over the past few days, strengthening against the USD. Please note that financial releases which tended to be positive for the Japanese economy. We expect this pattern to continue in the coming week as well. However, we would also like to make a small reference to BoJ’s interest rate decision. The bank is expected to remain on hold at -0.10% and currently JPY OIS imply a probability of 81.78% for such a scenario. We expect the bank to maintain an accommodating stance for the Japanese economy and BoJ Governor Kuroda’s recent comments were indicative as he stated that the bank will not hesitate to add further easing if it’s needed. So, we expect the bank to maintain a cautious tone, yet a ray of optimism could also be included. Please note that the Japanese currency may have muted reactions to BoJ’s interest rate decision.

Aussie traders remained unimpressed by RBA’s interest rate decision on Tuesday and the commodity currency tended to be moved more by the market sentiment, strengthening marginally against the USD. Any optimism about the global rebound implies that global trade may pick up, strengthening the AUD and vice versa. Any deterioration of the US-Sino relationships could weigh on AUD. Next week, we may see Aussie traders focusing on Australia’s employment data for June on Thursday. Also, Australian exporters of raw materials, as well as Aussie traders, could focus on the release of China’s trade data for June on Tuesday with the balance figure as well as imports being of special interest. The main release from China though is expected to be China’s GDP rate for Q2, along with the industrial output growth rate for June on Thursday. 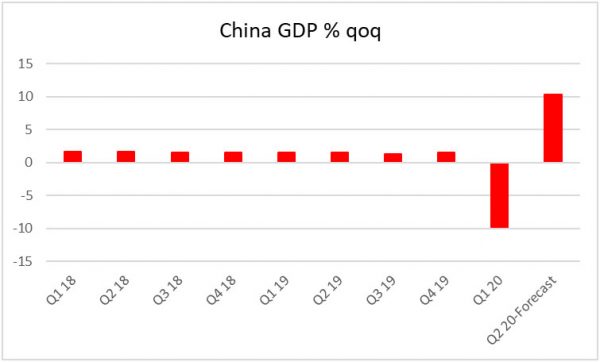 As a general comment, we would like to highlight the spreading of COVID 19 in the US and the US-Sino trade relationships. These two main topics of the week, on a fundamental level, could have wider implications than only in the US. Should the disease’s spread widen, or the US-Sino relationships deteriorate further, we could see the market worries intensifying creating safe-haven flows once again and vice versa. Overall, we expect the USD maintaining the initiative over its counterparts yet headlines about regional issues may cause some diversification especially on the pound by Brexit and EU’s fiscal stimulus for the EUR. Also, we tend to underscore the release of China’s GDP rate, as it’s the first for Q2 among other major economies.
de balance.