The Reserve Bank of Australia is set to stand pat again when it announces its latest policy decision on Tuesday at 0430 GMT. As the Australian economy climbs out of its worst recession in decades, policymakers are not anticipated to feel the urge to act in July. However, with the country continuing to see an alarming surge in new coronavirus cases, it may only be a matter of time before additional monetary support becomes necessary. Any hints on Tuesday that that’s where policy is headed could knock the wind out of the aussie’s rally.Recovery in jeopardy as restrictions tightened

Out of all the major central bank responses during the pandemic, the RBA has had to make the least intervention in the financial markets to restore calm and the smooth flow of credit. A strong response by Australia’s government as well as by China – its biggest trading partner – to the virus outbreak put the country in the fortunate situation of being able to reopen the economy quickly and safely. 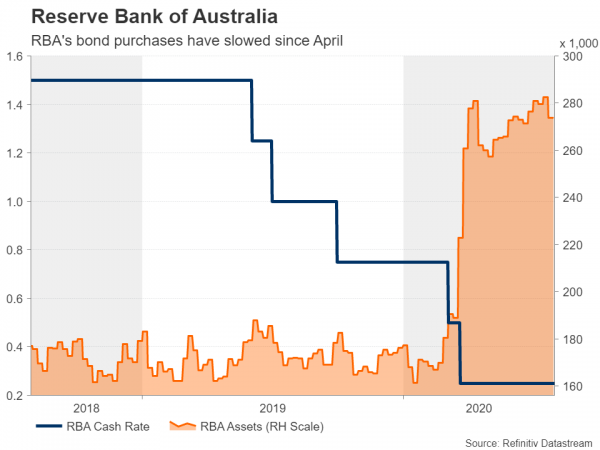 But that enviable position didn’t last long as the recent virus flare-up in Victoria has fast evolved into a second wave, forcing authorities to place the entire state under lockdown. Other states have also tightened social distancing rules. But the impact of the latest restrictions hasn’t yet started to show up in the data, perhaps with the exception of the preliminary retail sales numbers for June. After a strong jump in May, the rebound in retail sales moderated to 2.4% month-on-month in June. The final print, which will be released three hours before the RBA’s decision, could be revised even lower. 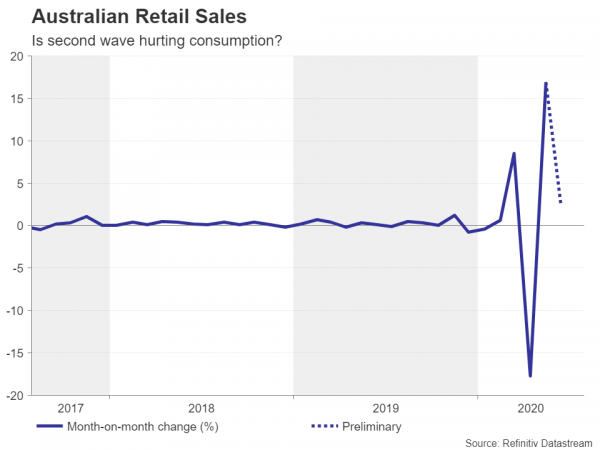 The next employment report due in mid-August should be of even greater importance as any sign that the pace of hiring is slowing or, worse, jobs are being shed again, could prompt the RBA to rethink its wait-and-see approach. Inflation data released in the past week are probably already worrying policymakers as the consumer price index fell by 0.3% annually in the first quarter – the lowest reading since 1997.

How dovish will the RBA sound?

Hence, a dovish shift at the July meeting is quite likely even if the Bank isn’t ready to admit just yet that fresh action may be needed sooner rather than later. In case the policy statement on Tuesday doesn’t go far enough in providing clarity, the quarterly Monetary Policy Statement out on Friday (0130 GMT) should shed more light on whether policymakers are turning more optimistic or negative about the outlook.

If there’s no change to the Bank’s overall tone next week, the Australian dollar is likely to maintain its bullish bias. The currency is currently trying to clear the $0.72 hurdle. A successful break above this key level would open the way for the 123.6% Fibonacci extension of the January-March downtrend at $0.7391.

The aussie rally’s days may be numbered

However, should the RBA alter its language to a much more cautious one, the aussie could find itself retreating towards the $0.70 level, before heading for the 50-day moving average around $0.6935.

In the more medium-term picture, there are significant downside risks for the aussie as the recovery of the domestic economy is bound to hit a stumbling block sooner or later. But aside from that, worsening US-China as well as China-Australia tensions are risks that haven’t been fully priced in by investors, therefore any negative correction could turn out to be quite sharp.