New Zealand’s jobs numbers for Q4 will hit the markets at 21:45 GMT Tuesday. The unemployment rate is expected to rise, but mostly for ‘healthy’ reasons, as more people return to the labor force. New Zealand’s economy has staged a phenomenal recovery overall, the virus has been eradicated, and it is looking unlikely that the Reserve Bank will cut rates again. As for the kiwi, for now a lot will depend on global risk appetite, but the overall picture seems encouraging.

Good times keep on rolling in New Zealand. The nation has essentially eradicated the virus without even vaccinating anyone, and it is now reaping the economic benefits. An early and extremely tight lockdown, combined with powerful relief programs from the government, have seen the economy stage a full recovery.

GDP numbers suggest that economic activity was already back above pre-pandemic levels in the third quarter of 2020, business confidence has skyrocketed, the housing market is booming, and the latest inflation data show the CPI rate hovering around the middle of the RBNZ’s 1-3% target. Meanwhile, the recovery in China and the rest of the global economy has fueled demand for New Zealand’s commodity exports. 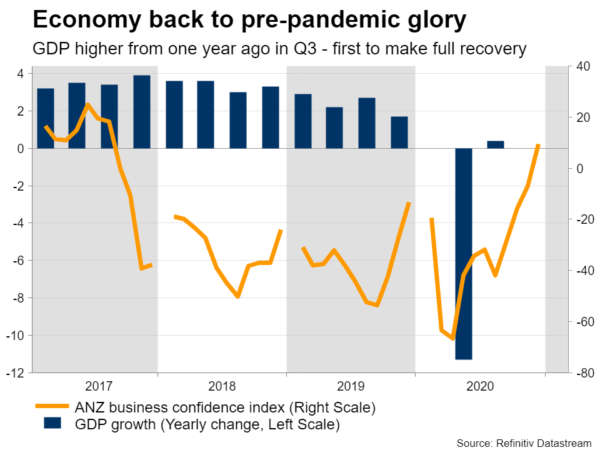 The price the economy had to pay for all this was sacrificing the tourism industry as New Zealand’s borders are still shut, but fortunately this is a relatively small sector, so it is easy for the government to support it.

The upcoming jobs numbers for Q4 are expected to confirm this optimistic narrative. The unemployment rate is anticipated to increase to 5.6%, from 5.3% in the previous quarter, however this does not tell the whole story.

The employment aspect is expected flat, while the labor force participation rate is projected to tick up. These suggest that most of the increase in the unemployment rate is due to discouraged workers returning to the jobs market. 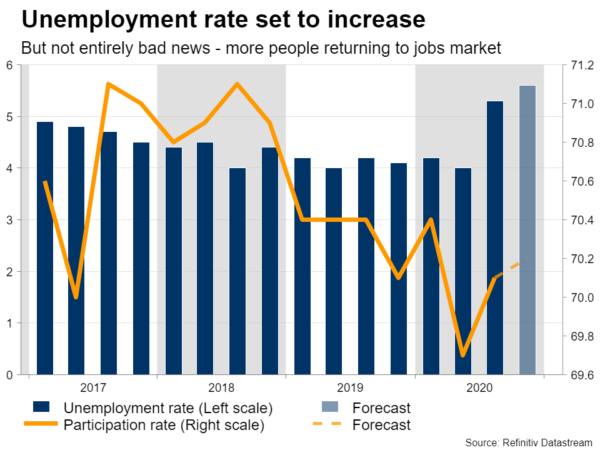 Indeed, even after such an increase the unemployment rate would still be quite low, which speaks to the power of the government’s measures, especially the wage support scheme that kept workers on their jobs.

What does it all mean for FX?

Turning to the markets, with the domestic economy firing up and commodity prices rallying, investors have priced out expectations for another rate cut by the Reserve Bank of New Zealand (RBNZ). Money markets currently imply only a 15% chance for another rate cut this year.

In turn, the brighter economic prospects, an RBNZ that may have played its final card already, and the cheerful mood in global markets have been fueling the kiwi’s relentless rally. The question now is, can the advance continue?

The short answer is most probably, though in the near term, a lot will depend on global forces. How stock markets perform from here, how smoothly the global vaccine rollout proceeds, and how much higher commodity prices climb will be critical.

The main downside risk to this cheerful narrative is whether the existing vaccines will be effective against all the mutated strains of covid that are being discovered. If even a single strain proves to be resistant against the vaccines we have, the narrative that everything is going back to normal later this year could take a serious hit.

However, even in this case, the timeline for re-opening the global economy would simply be pushed back a few months, so any episode of risk aversion is unlikely to last too long, especially since markets could start to price in more stimulus in most countries.

Taking a technical look at kiwi/dollar, the pair has been trading in a sideways pattern for several weeks now. In case the bulls retake control, the upper end of this range at 0.7245 could provide initial resistance.