It will be an exciting week for financial markets, with two major central bank meetings and a storm of economic data to keep traders busy. The Bank of Canada seems ready to scale down its gigantic QE program, though the European Central Bank is unlikely to disturb the waters. In the meantime, PMI business surveys from the major regions will give us a sense of how the recovery is progressing, and whether America continues to out-recover everyone else.

The new quarter has turned the tables in the FX market. The rally in bond yields that supercharged the dollar and sterling last quarter seems to have run out of juice, bringing the devastated euro and yen back to life. The US data pulse remains tremendously strong thanks to the barrage of federal spending and the lightning-fast vaccination program, but the Fed insists that any rate increase is still years away.

Everyone agrees that a surge in inflation is coming. A cocktail of supply chain disruptions, soaring commodity prices, and direct money transfers to consumers will likely see price pressures accelerate. However, Fed officials believe this episode will be short-lived, and thus won’t influence their policy decisions. They think longer-term forces will ultimately pull inflation back down. 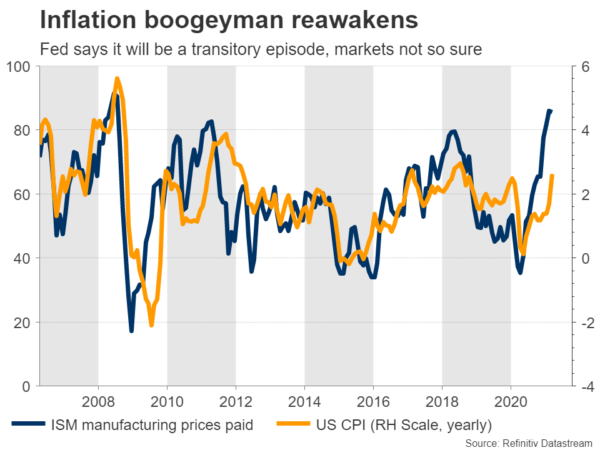 Investors think otherwise. Markets fear this inflation episode will be stickier than the Fed expects, forcing policymakers to raise rates sooner. The latest FOMC forecasts suggest no action until 2024, but market pricing implies more than two rate hikes until then.

Beyond the Fed insisting it will stick to its word, the other factor that pushed euro/dollar higher has been the acceleration in European vaccinations. The Eurozone is still miles behind America in the immunization race, but the pace has been ramped up, providing the euro some relief. Additionally, the ecstatic mood in stock markets is positive for the pair, as the dollar often acts like a safe haven nowadays. 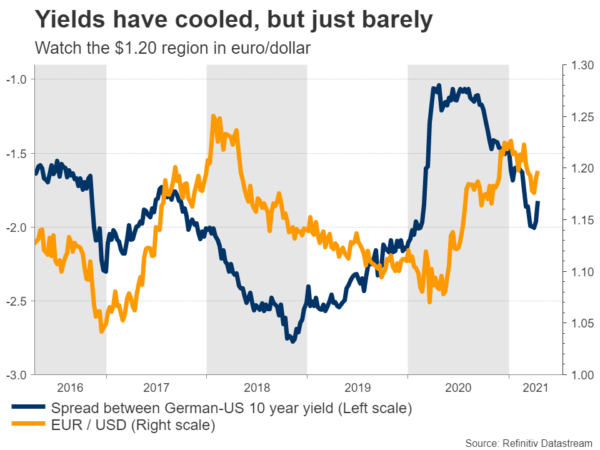 The question is whether this is just a correction in the broader euro/dollar downtrend, or a turning point. For now, everything depends on the $1.20 region. If it is violated, that would mark a higher high, turning the technical outlook more neutral. If not, the trend remains negative. In the bigger picture, it’s difficult to be pessimistic on the dollar, with the US economy being so strong and more stimulus on the way.

BoC to take its foot off the QE gas

The Bank of Canada might become the first major central bank to scale back its emergency programs on Wednesday. The nation’s vaccination program has accelerated and the economy is healing quickly, with some impressive labor market data lately and the BoC’s own business survey painting a rosy picture.

On top of this, oil prices remain elevated, the housing market is booming, and some of the benefits from the extravaganza of US spending are bound to spill over into Canada. That said, there are some worrisome spots too. Even though vaccinations have been stepped up, infections have also risen, sending the nation’s most populous region – Ontario – back into a lockdown. 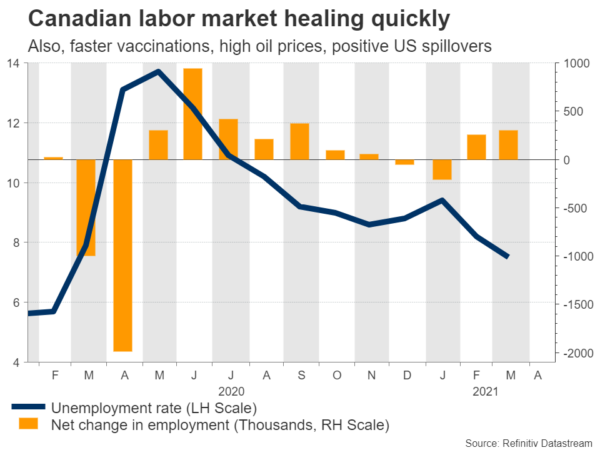 That’s unlikely to stop the BoC from scaling back its QE program, though. Simply put, the Bank did too much too early, and now it is almost forced to take its foot off the gas. The BoC currently owns around 40% of all Canadian bonds, and Governor Macklem has warned that if their holdings rise above 50% of the total market, it could distort market functioning.

As such, it looks like the BoC is going to push on the brakes. The Bank currently buys C$4 billion per week in bonds through its QE program, and it might scale that down to C$3 billion. If so, that would argue for a positive reaction in the loonie, albeit not a massive one, as the move has been telegraphed in advance.

In general, the outlook for the loonie seems positive amid elevated oil prices, a strengthening recovery, and booming stock markets. However, any future gains may be better reflected in pairs like loonie/yen, not so much dollar/loonie, as the prospects for the US dollar seem bright too. Beyond the rate decision, the government will unveil its budget plans on Monday, while inflation data for March will be released on Wednesday ahead of the BoC meeting.

Not much has happened since the ECB’s latest decision in March, but if anything, economic developments since then have been encouraging. Back then, the central bank accelerated its QE purchases to keep a lid on borrowing costs, as a strengthening recovery in the US and the landslide of fiscal stimulus were spilling over into higher bond yields in Europe too.

That trick seems to have worked. Eurozone yields have been moving sideways lately, while incoming data have been surprisingly resilient, with PMI surveys pointing to an economy that is slowly recovering despite the ongoing lockdowns. Meanwhile, the pace of vaccinations has accelerated meaningfully. Reflecting all this, the euro has staged a relief rally. 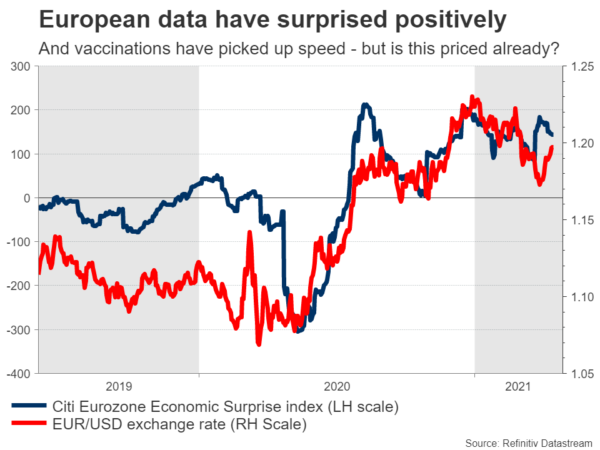 This will probably be a quiet meeting. President Lagarde’s tone might be a shade more optimistic, but that’s unlikely to spark any huge market reactions. As for the euro, a lot of the good news is likely priced in now. The economic situation is not as desperate as it once seemed, but it’s not bright either. This implies little scope for a powerful rally from here, unless the news flow continues to improve.

As such, the real event for the euro might be the preliminary PMIs for April, which are due out on Friday. Forecasts suggest those indices will remain roughly flat, so any surprises could dictate the euro’s short-term fortunes.

Pound turns its sights to flurry of data

Over in Britain, there’s a data barrage coming up. Employment data for February are out first on Tuesday, ahead of inflation numbers for March on Wednesday. Then on Friday, we get retail sales for March and more crucially, the PMIs surveys for April.

The pound has been among the best-performing currencies this year, however, the wind has come out of its sails lately amid some delays in the nation’s vaccination program, which until now was world-beating. Overall, the prospects for sterling still seem positive with the UK set to be among the first economies to re-open properly, but there are some risks too. 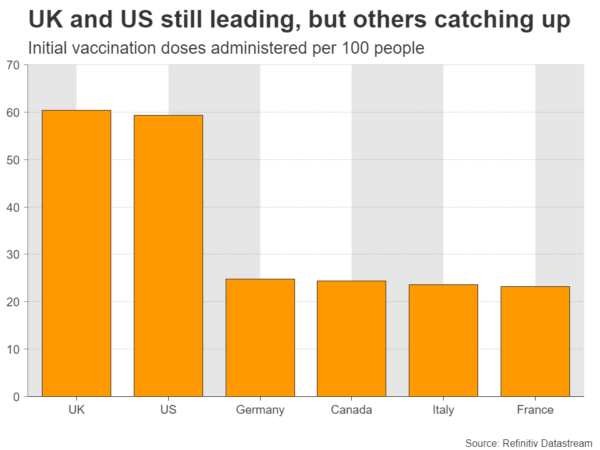 The main one is the quality of vaccinations. While the speed of immunizations has been stunning, most people have received the Oxford/AstraZeneca vaccine, which is less effective against the new variants. Hence, there’s a threat of cases exploding again as Britons return from their vacations abroad. There’s also some political risk as tensions in Northern Ireland have escalated lately, complicating EU-UK talks on border checks with the province, and voices for another independence referendum are growing louder again in Scotland.

US PMIs and kiwi inflation on the radar

In the US, the preliminary Markit PMIs for April will also be released on Friday, though the markets generally pay more attention to the ISM surveys.

Separately, in New Zealand, inflation stats for Q1 will see the light on Wednesday. An acceleration seems to be in order, thanks to rising commodity prices and supply chain disruptions. That said, the RBNZ already expected as much in its latest forecasts, so it wouldn’t be any huge surprise. The kiwi’s fate remains tied to the global economy, commodity prices, and risk sentiment.