Action Forex
HomeContributorsFundamental AnalysisDollar Heads For Weekly Gains, Only Kiwi Can Keep Up

Dollar Heads For Weekly Gains, Only Kiwi Can Keep Up 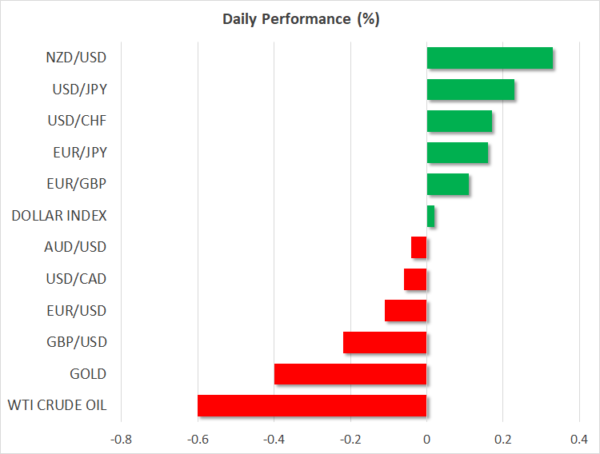 It’s been an action-packed and what should have been a positive week for risk assets, with the earnings season getting off to a good start, the Fed’s Powell maintaining his pledge for ultra-accommodative policy and Congress edging closer on both the partisan and bipartisan components of Biden’s infrastructure plan. However, the prevalent theme during all this has been the ever-escalating spread of the Delta variant that’s clouding the outlook for global growth.

Worries that the economic recovery will be stymied by the Delta wave sweeping the world have been gradually building up in recent weeks. Initially, the fears were confined mainly to Asia-Pacific countries that have a low vaccination rate. But now that the Delta strain has become rampant in places like the United Kingdom, which has one of the highest vaccine uptakes in the world, investors have started to panic a bit as hopes that lockdowns had become a thing of the past are starting to look premature.

Investors will be watching in earnest to see whether the British government’s gamble of removing all virus restrictions and relying on vaccines to keep hospitalizations and deaths low will pay off. But the problem for the risk rally is that there are signs the global recovery lost steam even before the Delta variant became such a concern. Hence, the steady rush towards safe havens over the past month that has boosted the likes of the US dollar, yen and Swiss franc, as well gold and government bonds.

The US dollar has survived Fed Chair Powell’s dovish rhetoric in his testimonies this week as, apart from the risk-off trades, there’s a growing sense that policymakers won’t be able to keep the stimulus taps open for too long. Powell is only doing his job in keeping market nerves calm but it’s hard to ignore all the evidence that points to the current burst of inflation being too great and too widespread for it to be transitory.

Even the Fed’s traditionally more dovish FOMC members are nervous. St. Louis Fed President James Bullard yesterday reaffirmed his hawkish shift, saying “I think we are in a situation where we can taper”. Unless Powell changes his tune on inflation soon, there’s a danger markets will interpret this as a sign that he is more worried about the recovery than he is letting on, potentially sparking even more risk aversion.

However, the market mood is looking somewhat more upbeat on Friday, with the yen, franc and gold slipping, and the 10-year Treasury yield rebounding four basis points from yesterday’s one-week low of 1.2920%.

The dollar was flat against a basket of currencies, on track for a weekly gain of 0.5%. The euro struggled to capitalize on the improved sentiment but the pound advanced towards $1.3860 after surprisingly hawkish comments from the BoE’s Michael Saunders, who on Thursday became the second MPC member this week to call for an early end to QE.

However, the big winner on Friday was the New Zealand dollar, which got a lift from stronger-than-expected CPI numbers. New Zealand’s inflation rate jumped to 3.3% in the second quarter, above the RBNZ’s target band of 1-3%. Earlier in the week, the RBNZ shocked markets by announcing it will halt its bond purchases later this month, prompting investors to price in a rate hike in August. The inflation data has only reinforced those expectations and the kiwi could extend its gains in the coming weeks, or at the very least, be immune to selling episodes.

There was little reaction in the yen after the Bank of Japan kept policy on hold as expected. Later in the day, US retail sales will take centre stage, which could weigh on the greenback if they decline again in June. But after yesterday’s relatively robust data from the jobless claims and manufacturing surveys, a positive surprise could further boost the US currency.

In equity markets, European shares and US stock futures were in the green despite tech stocks coming under pressure. The Nasdaq Composite slipped 0.7% on Thursday and the S&P 500 fell 0.3%, with financial stocks being the few winners after this week’s stellar earnings results from the big banks.

Asian tech stocks were also feeling the heat today after shares of Taiwan Semiconductor Manufacturing Co tumbled 4%. Weaker-than-expected profit margins by the company has added to concerns about whether the incredible growth in earnings is sustainable going forward and that is something that Wall Street might have to contend with as well this season. 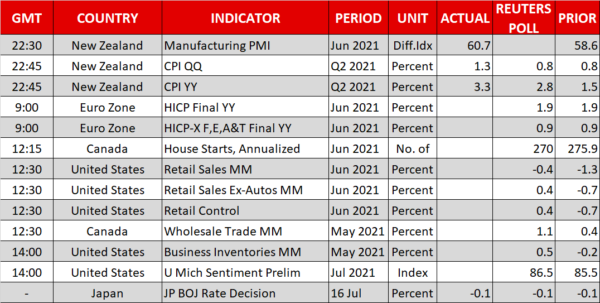