The Reserve Bank of Australia announces its first policy decision of the year on Tuesday at 3:30 GMT.  The last time the Bank’s governor, Philip Lowe, spoke in mid-December, he told investors he didn’t think conditions for a rate hike would be met in 2022. Since then, the labour market has tightened further, while underlying measures of inflation have crept up to their highest levels since 2014. Will the RBA update its forward guidance to bring it more in line with market expectations, and would that offer much support to the sluggish Australian dollar?

Learning to live with the virus

The Omicron wave finally seems to be subsiding in Australia, which after ditching its zero-Covid policy, the nation is learning to live with the virus. Having gotten much of its adult population fully vaccinated, Australia has followed the UK approach, keeping much of the economy open while reimposing some modest curbs as the Omicron variant swept across the country.

The change in the government’s response to fighting the virus has been good news for the Australian economy. Overall employment is now bigger than what it was before the pandemic, consumer spending has strengthened notably in recent months and inflationary pressures have started to build. Although Omicron is expected to have dented growth in January, the impact will likely be short-lived.

Is it the end of the road for QE?

There’s a strong case therefore for the RBA to scrap its bond purchase programme early, possibly as soon as the February meeting. Policymakers had always set this meeting as the one where they would review the programme, but rather than further reducing its pace before ending it in May as previously signalled, there’s a good deal of pressure to wrap up QE now. 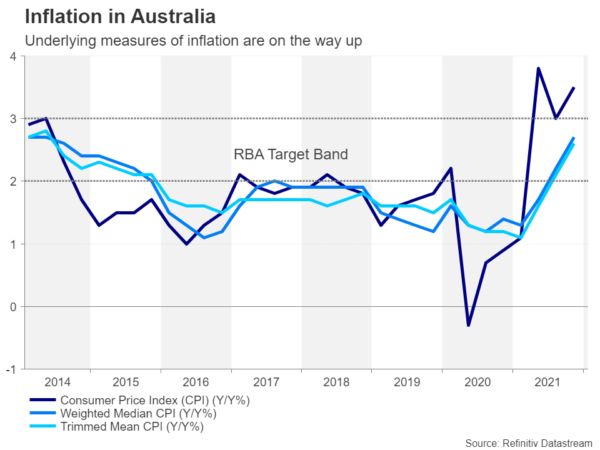 Australia’s consumer price index jumped by a stronger-than-expected 1.3% between the third and fourth quarters and although the annual rate was comparatively low at 3.2%, the RBA’s two closely watched gauges of underlying inflation climbed to the highest in more than seven years in Q4.

Markets unaligned with the RBA

While ending QE abruptly would definitely be seen as a hawkish tilt, what investors will be paying more attention to is the Bank’s forecasts for the cash rate, as well as for inflation and GDP growth in the quarterly Monetary Policy Statement due the following Friday. Governor Lowe had previously signalled that rates are unlikely to be lifted before late 2023 at the earliest. But markets not only think that the RBA will start to raise rates in 2022, they have fully priced in five increases. 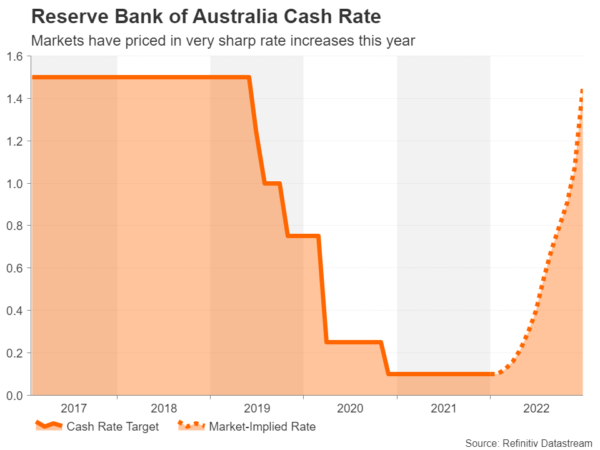 This leaves a lot of room for disappointment. Yet, the intensifying rate hike bets have done little to boost the local dollar. The dimming global growth outlook due to Omicron and tightening monetary policy around the world, and more specifically for Australia, the economic slowdown in China, have been weighing on the aussie lately.

Against the US dollar, the aussie is currently testing the $0.71 level after being unable to overcome resistance at its 50-day moving average (MA). If the RBA doesn’t bring forward its rate hike timeline, a move back towards December’s more than one-year low of $0.6991 is very possible.

In the bullish scenario, if Lowe flags a rate increase this year, aussie/dollar could make a push up towards the January peak of $0.7314 initially, before attempting to reach the 200-day MA just beneath the $0.74 level.

However, it remains to be seen whether the RBA is ready yet to make such a dramatic shift to its predicted rate path. Early 2023 might be seen as a more realistic timetable and policymakers will probably want to wait a while longer before committing to liftoff in 2022. Even if they were to surprise with a very hawkish forward guidance, it would likely come attached with conditions, such as wanting to see a significant pickup in wage growth.