Recession worries are mounting as central banks around the world step up their fight against soaring inflation. The flash PMI readings for June will be watched for any clues that tighter monetary policy is choking economic growth. In the meantime, inflation numbers in Canada, Japan and the United Kingdom could add yet more pressure on policymakers to do more. However, after hiking rates by the most in 28 years, Fed chief Jerome Powell could steal the limelight again in the coming week when he testifies before lawmakers.

A hawkish European Central Bank has been unable to come to the euro’s aid despite Eurozone government bond yields surging to multi-year highs. An even more hawkish Federal Reserve is keeping the bias in the dollar’s favour. But that’s not the only reason for the euro’s weakness. Investors are worried that the risk of a sharp economic downturn is greater in Europe where the spike in energy prices has been more pronounced than in America as the continent is more reliant on Russian oil and gas.

So far, Eurozone growth has held up relatively well, but the picture is deteriorating fast as the situation in Ukraine remains dire. With energy prices staying elevated and loose monetary conditions coming to an end, Thursday’s flash PMI reports are expected to point to a further moderation in business activity in June. 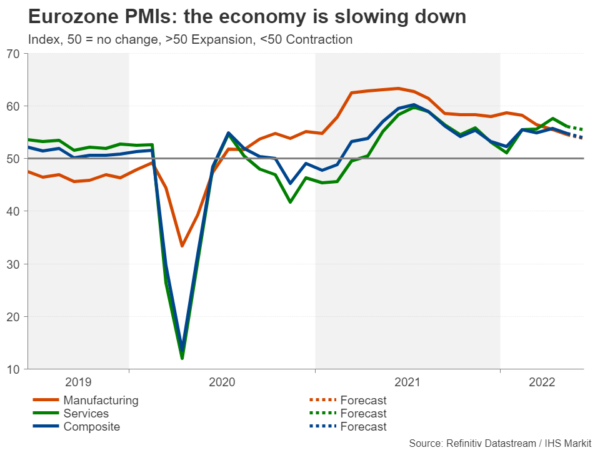 However, a lot of the pessimism has already been priced into the markets by now, so unless the PMIs are substantially lower than forecast, the euro might not necessarily suffer significant losses. Germany’s Ifo business climate index will follow on Friday.

Pound on recession alert amid a slew of UK data

Across the channel, the economic pain from the Ukraine conflict and supply chain problems is proving to be even more acute in the United Kingdom. Inflation is rampant, the government keeps stepping from one crisis into another, supply and labour shortages have been exacerbated by Brexit, and tensions between London and Brussels are simmering again over Northern Ireland.

It’s no wonder that businesses are feeling gloomy and the June PMIs due Thursday are expected to reflect the worsening climate. However, before that, all eyes will be on the latest consumer price index on Tuesday.

The UK’s headline inflation rate jumped to 9.0% y/y in April and is projected to have inched up to 9.1% in May – the highest among the major economies. The Bank of England raised interest rates by 25 basis points for the fifth consecutive meeting in June as it attempts to rein in spiralling prices. If CPI continues to rise rapidly, the BoE may have no choice but to switch to a more aggressive pace of tightening, threatening to push the economy into a full-blown recession. 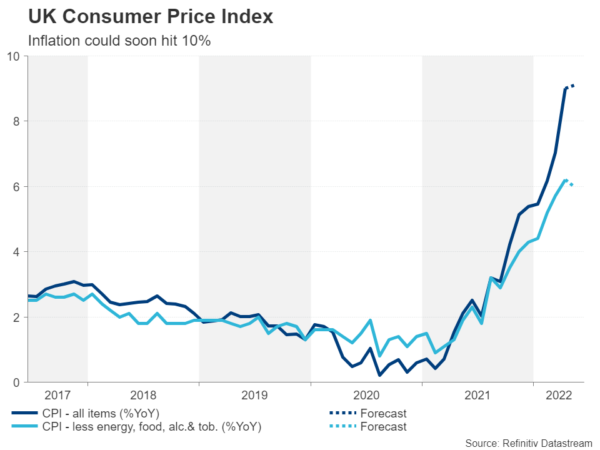 Many indicators already suggest UK GDP is headed for contraction in the second quarter. Retail sales figures out on Friday will be watched to gauge the strength of consumer spending in May.

Given the risks of stagflation, hot inflation numbers are unlikely to provide much support to sterling, but better-than-expected retail sales data might, as it would ease concerns about growth turning negative.

Inflation and retail sales will be the focal point for traders in Canada too. The Canadian economy is booming and is possibly in better shape than America’s. But that hasn’t stopped the Canadian dollar from coming under pressure against its US counterpart as the commodity-linked loonie is sensitive to risk sentiment.

Bank of Canada Governor Tiff Macklem hinted earlier this month that the central bank is open to hiking rates by 75-basis-point increments. And after the Fed did exactly that in this past week, the odds of the BoC doing the same at its next meeting have risen.

Tuesday’s retail sales report and Wednesday’s CPI readings will likely support the need for bigger rate hikes, while slightly disappointing numbers would probably not get in the way of policymakers stepping on the brakes much harder.

Aussie: one eye on RBA and another on China

Another risk-driven currency is the Australian dollar. Worries about a slowdown in China and elsewhere have partially offset the boost from higher commodity prices. Nevertheless, the aussie’s year-to-date losses are notably less than many of its peers’. 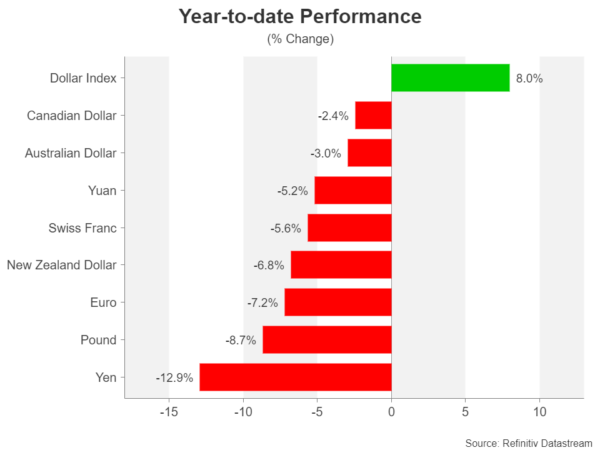 The Reserve Bank of Australia will publish the minutes of its last policy meeting on Tuesday. Any signs of a further hawkish shift could give the aussie a modest nudge up, though there could be some downside risks from Thursday’s flash PMIs.

Aussie traders will also be keeping an eye on the People’s Bank of China policy decision on Monday. There is some speculation that the prime rate will be cut for the second straight meeting. Such a move could lift sentiment at the start of the week’s trading.

No inflation joy for the yen

The Bank of Japan is now the only central bank not to join the global tightening race after the Swiss National Bank took markets by surprise and hiked its policy rate by 50 bps. However, it will likely be only a matter of time before the BoJ is forced to change course as well and begin withdrawing some of its massive stimulus.

The 10-year Japanese government bond yield has been stuck at the upper limit of the BoJ’s yield target while the yen has nosedived against the US dollar to 24-year lows. But the Bank of Japan is not budging as it wants the rise in inflation to be sustainable. 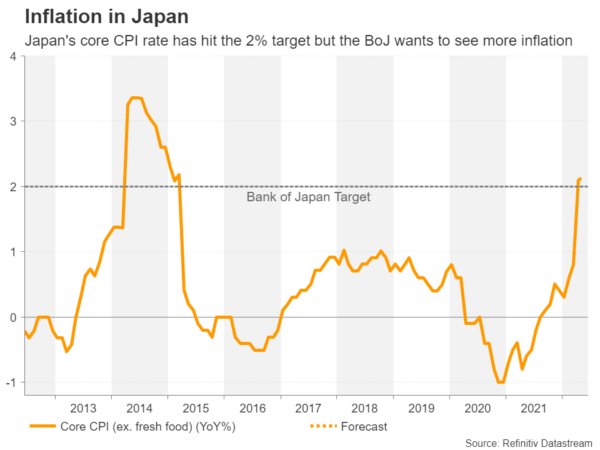 CPI data out on Friday is expected to show the core print holding steady just above the target in May at 2.1% y/y. But until the BoJ sees evidence that inflation is becoming broad based and is not driven solely by surging energy prices, the yen will probably continue to struggle.

In other data, the flash manufacturing PMI on Thursday will be important too.

It will be a relatively quieter week in the United States as the only key releases are existing home sales (Tuesday), manufacturing and services PMIs (Thursday), and new home sales (Friday). The PMIs by S&P Global do not tend to attract as much attention as the ISM ones but the flash estimates will be particularly crucial over the coming months as investors will want to get an earlier warning on possible recession risks. 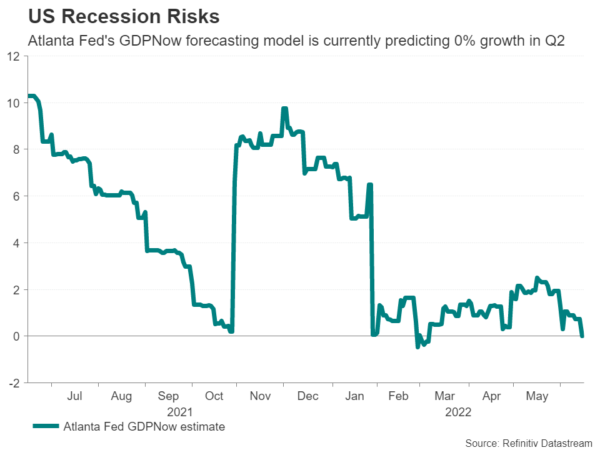 After the Fed hiked interest rates by 75 basis points, there is a heightened sense of anxiety about a hard landing in the world’s largest economy as the Fed battles to keep a lid on exploding prices. Chair Powell is not ruling out another 75-bps hike so his words will be scrutinized when he testifies before Congress on the Semi-Annual Monetary Policy Report.

The dollar rally could catch more fire if Powell reinforces his hawkish stance on the need to bring inflation down. On the other hand, Powell will likely be mindful not to stoke any more panic, so the greenback could pull back from its recent highs if he plays down the danger of the Fed tipping the economy into recession.