The Bank of Canada won’t hit the brakes on interest rate increases next week, but it is likely to slow them down. And we believe next week’s increase could be the last in this cycle. We expect a 25 basis point increase in the overnight rate to 4.0% from the central bank—smaller than the 50 basis point hike in October. The BoC has been clear that another larger 50 bps hike is also a possibility. But there are tentative signs that broader inflation pressures have peaked. And these have emerged even before the full impact of earlier rate hikes on the economy has been felt. It takes time, for example, for higher interest rates to feed through to household mortgage payments as fixed-rate contracts are renewed. Governor Macklem in October highlighted the need to balance the risks of both under- and over-tightening monetary policy—and the economic growth backdrop is widely expected to deteriorate. Our outlook foresees a moderate recession in the first half of next year.

Perhaps more important than the size of next week’s interest rate hike is how many more could follow. The answer to that question depends on inflation. Both the BoC’s preferred median and trim ‘core’ CPI measures have shown signs of moderation in recent months, and the breadth of inflation pressures has slowed. Canadian Q3 GDP growth surprised on the high side (2.9%) compared to BoC expectations (1.5%) but looked much softer in September and October than over the summer. Inflation is still running well above the 2% target rate, but a 4.00% overnight rate is likely enough to slow economic growth and inflation pressures further. The BoC will almost certainly (and correctly) keep the option to hike interest rates further if necessary. But our own base case expectation is that December will mark the last rate hike of this cycle. 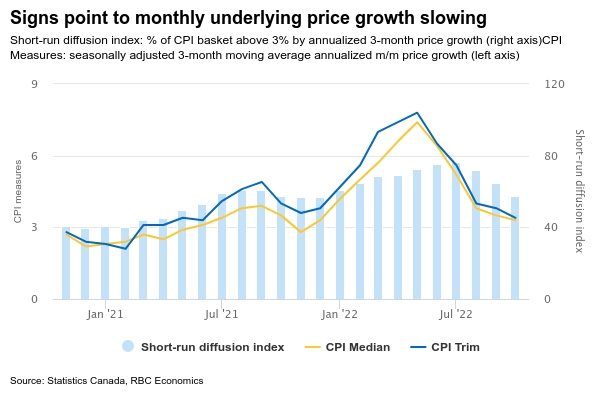 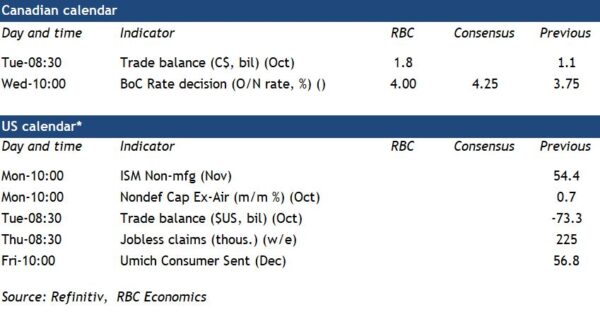