Action Forex
HomeContributorsFundamental AnalysisWeek Ahead – US Inflation Back in Focus, UK Data to Underline...

Week Ahead – US Inflation Back in Focus, UK Data to Underline Recession Risks

After a choppy start to the new year, markets will be bracing for the next set of CPI data out of the United States next week amid ongoing unease about Fed policy. Inflation stats are also due out of Australia, while in the United Kingdom, monthly GDP numbers could stoke recession fears yet again. China’s economy will be at the forefront of investors’ minds too as the December economic indicators start rolling in. But a potentially bigger market-moving event is a gathering of central bankers in Sweden where Fed chief Jerome Powell will be participating.

Will US CPI maintain its descent?

Markets may have given up hope of an early Fed pivot but they are still not convinced that rates will have to be raised too high into restrictive territory. The consumer price index for December due Thursday will be the next vital release that will either bolster bets of a more aggressive Fed or undermine policymakers’ warnings of additional rate increases to come.

Inflation is clearly on the way down in the US. The question now is: how long will it take for it to fall back to within the Fed’s 2% goal and is there a risk it could begin to creep back up again before reaching the target? The December CPI readings will further paint the picture on this. After falling to 7.1% in October, America’s inflation rate could drop below 7% in December for the first time in 13 months. The month-on-month rate is predicted to maintain the lowly pace of 0.1%, but the core measure could quicken slightly from 0.2% to 0.3% m/m. 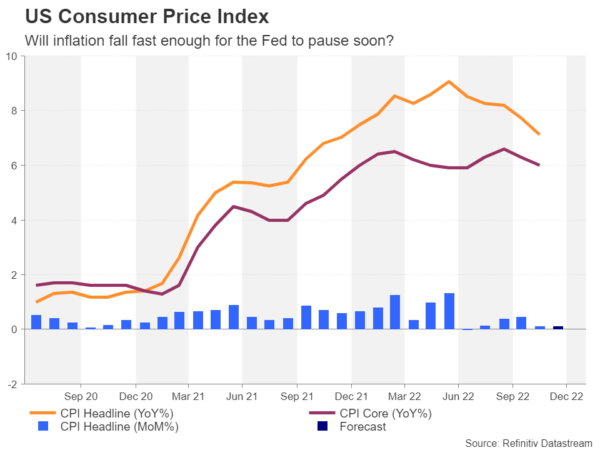 There will be further views on inflationary pressures on Friday from the University of Michigan’s closely watched consumer sentiment survey. Although consumer sentiment has barely recovered from all-time lows and only a slight pickup is anticipated in the index in January, the survey’s gauges of consumer inflation expectations have been more encouraging. Both one- and five-year inflation expectations confirm the recent peak highlighted by the other price metrics and if there is a further decline in January, this could lift sentiment at the end of the trading week.

The US dollar has been directionless lately as the rising threat of the US economy tipping into recession has offset the boost from the Fed’s ultra-hawkish stance. It’s been somewhat of a similar story on Wall Street and stocks continue to struggle. But with concerns about weakening demand growing by the day, it will be difficult to get anything more than a short-term bounce in risk assets should the inflation figures undershoot expectations.

However, the dollar may find some love on Tuesday when Chair Powell is set to speak at an international symposium on central bank independence, organized by Sweden’s Riksbank. Other prominent speakers will include the Bank of England’s Bailey, the Bank of Canada’s Macklem and the Bank of Japan’s Kuroda, who will soon be departing from the central bank world like his host Stefan Ingves of the Riksbank.

But all eyes will probably be on Powell, who has not made any public remarks since the December FOMC press conference. Given the theme of the symposium, it’s likely that Powell will refrain from commenting on domestic policy, but any fresh views on the interest rate outlook could lift the dollar.

Are China’s woes over?

Aside from Fed policy, another uncertainty weighing heavily on the markets lately has been China’s Covid response. After a year of endless shutdowns that have ravaged the Chinese economy, Beijing’s abrupt change of heart about zero-Covid policy has been bittersweet for the markets. Although military-style lockdowns are now a thing of the past, surging infections have meant that consumers are still not spending as much and businesses are being disrupted from workers calling in sick. Hopes of a quick economic turnaround have subsequently been dashed, with commodities such as oil taking a substantial hit from this reality check. 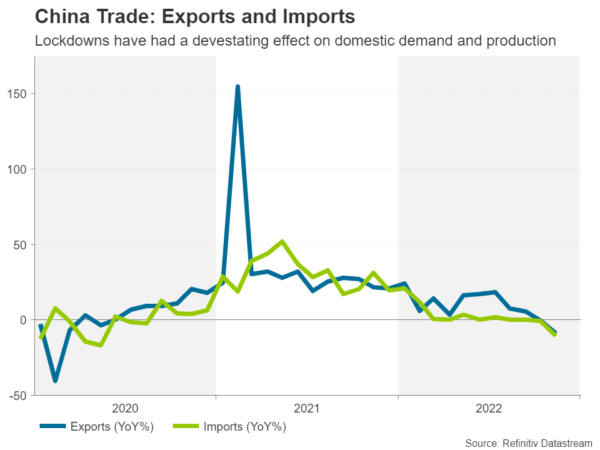 However, if investors spot some signs of stabilization in the data towards the year end, this may be taken as a positive development. The first opportunity for this will come on Thursday with the December CPI and PPI publications where any uptick in price pressures would indicate a demand recovery is underway. On Friday, the latest trade numbers are due. In October and November, China was in the unusual position of reporting back-to-back yearly declines in both exports and imports, underscoring the unsustainability of zero Covid.

Inflation data may pose upside risk for the aussie

Any improvement in the December readings could buoy equities as well as the Australian dollar, as China is Australia’s biggest export customer. Domestically, CPI figures out on Wednesday will also be crucial for the aussie. Like in most countries, inflation appears to be peaking down under, but the Reserve Bank of Australia might have nevertheless jumped the gun by downshifting to 25-bps hikes or even considering pausing soon.

At 6.9%, inflation is far too high and the RBA may be underestimating how difficult it will be to get it all the way down to its 2-3% target band. Hence, an upside surprise could further bolster the aussie, which is up a whopping 10% from its October lows. 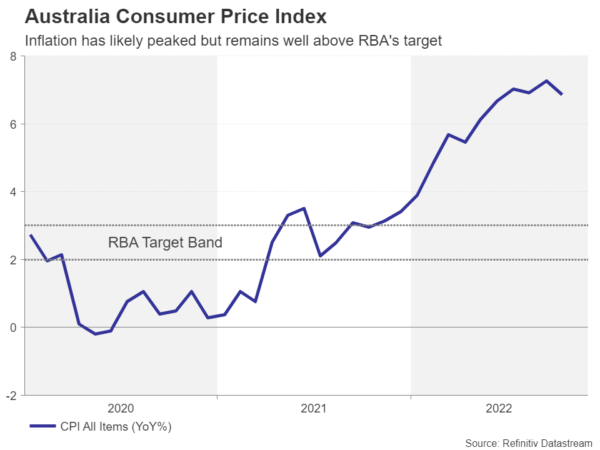 Pound might not have much to cheer about in 2023

Despite an impressive rebound in the autumn, the pound could not dodge being one of the worst performing major currencies of 2022. Moreover, the uptrend began to falter in December and there could be more pain to come in 2023. It’s highly likely that the UK economy is already in recession and even if the energy crunch continues to subside, there are other problems facing Britain. A cost-of-living crisis made worse by Brexit, the largest wave of strike action since the 1970s, a health service under crippling pressure and a dysfunctional government unable to deal with all the problems doesn’t exactly invoke confidence in the economy or in sterling.

Next week’s batch of data will likely serve as a reminder to investors about the challenges the British economy faces in returning to its pre-pandemic glory. After bouncing back in October, GDP is expected to have contracted again in November. Breakdown figures including industrial production will also be released, along with trade numbers for the same month.

Positive surprises cannot be ruled out, but the risk to the pound is generally skewed to the downside. Unless the dollar suffers a major selloff, it’s hard to see cable matching its December peak of $1.2445 in the near term. 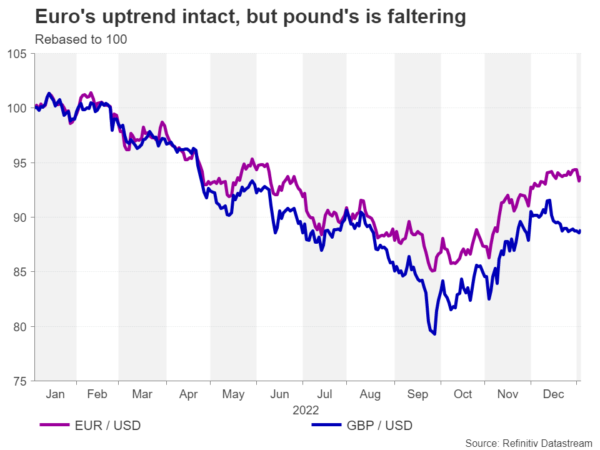 Across the channel, it’s mostly second-tier releases for the euro area, with the main one being German industrial output for November on Monday and the Eurozone-wide print on Friday. Like the pound, the euro has given up some gains and is off its December highs, but has overall been more resilient, retaining some upward drive. If the US inflation data misses expectations, the euro might just be able to crack the $1.07 barrier.

In Japan, the December CPI estimates for the Tokyo region are due on Tuesday. These will be watched for signs of a further acceleration in Japanese inflation amid intensifying speculation that the Bank of Japan will soon take another step towards exiting its ultra-accommodative stance.