Trade numbers out of China look set to attract some headlines next week as trade tensions between the United States and China heat up and show no sign of deescalating. Germany and the United Kingdom will also publish monthly trade figures, while inflation data out of the US will be another closely watched indicator in a week where the Federal Reserve will be releasing the minutes of its March policy meeting.

China exports to moderate in March

After China responded to the US tariffs with tit-for-tat measures, it might find itself on the defensive if the latest trade balance figure due on Friday shows another large surplus with the US. Adding to the timing sensitivity is the US Treasury Department’s latest semi-annual currency report, which is expected sometime this month. The US has so far refrained from calling China a currency manipulator but may choose to step up the rhetoric again given recent developments. However, China’s overall trade balance in March is expected to shrink from $33.7 billion to $27.2 billion. Export growth is also forecast to moderate, to 10% year-on-year, following the 44.5% surge in February, but import growth is expected to accelerate from 6.3% to 10%. 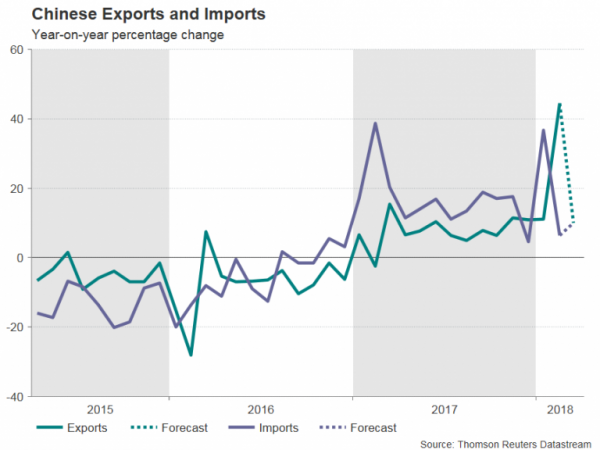 Data out of Japan next week may add to concerns that economic growth in the country is running out of steam following two consecutive months of declines in both the manufacturing and services PMIs. Machinery orders, which are seen as an indication of future business spending, are expected to post a drop in February after an 8.2% jump in January. The core measure is forecast to fall by 2.5% month-on-month in February when released on Tuesday. Also out the same day are corporate goods prices (Japan’s equivalent of producer prices). Corporate goods prices are forecast to increase by 2.0% on an annual basis versus 2.5% in January. Prior to Tuesday’s data, current account figures are published on Monday.

Like most Japanese data, the numbers are unlikely to see much reaction in forex markets as the Japanese yen remains mainly driven by risk sentiment and safe-haven flows, especially under the current climate of heightened trade risks.

As firming rate hike expectations for May hold sterling above the $1.40 level, UK manufacturers are unlikely to be happy about the newly emerged bullishness for the British currency. Manufacturing PMI data released by IHS Markit this week pointed to a notable slowdown in output in the first quarter of the year from the prior period. Data due on Wednesday is likely to show manufacturing production expanding for the 10th straight month, rising by 0.2% m/m in February. Wider industrial output, which includes the utilities and energy sectors, is expected to ease to 0.3% growth from a 1.3% surge in the prior month. Also released on Wednesday are trade numbers for February. 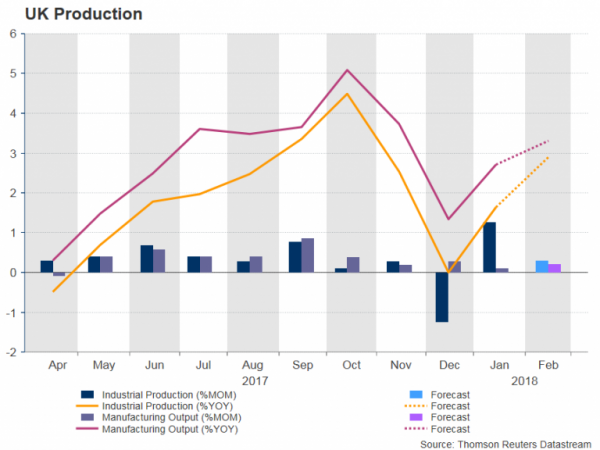 The euro has been drifting lower after forming a top at $1.2476 at the end of March as recent Eurozone data has been surprising mostly to the downside. Next week’s data is unlikely to be significant enough to lift the currency out of its short-term doldrums, but the account of the ECB’s March meeting could provide some cause for volatility. In particular, the discussion around the removal of the bank’s easing bias in the March statement and views about the timing of the ECB’s exit from its stimulus program will be watched by investors on Thursday. In terms of data, industrial output figures for the euro area are also due on Thursday, and ahead of that, the Eurozone sentix index and German trade numbers are published on Monday. German exports are expected to rise by 0.2% m/m in February, while the trade surplus is forecast to grow slightly to €21.4 billion. Along with China and Japan, Germany’s massive trade surplus is becoming an increasingly contentious issue with the Trump administration and a wider surplus in February could give President Trump a stronger argument in his shift towards more protectionism. On the other hand, a weaker export performance could raise further doubts about the strength of the Eurozone economy during the first quarter of the year.

US inflation back in limelight

Price gauges will be the primary focus of the US economic calendar next week. Producer prices for March are released on Tuesday and will be followed by the consumer price index on Wednesday. The annual rate of CPI is expected to accelerate from 2.2% to 2.4% in March to what would be a one-year high. The core rate is also forecast to edge up, from 1.8% to 2.1%. A stronger reading could help the US dollar extend its gains above the 107 level versus the yen. Another potential mover for the greenback on Wednesday will be the minutes of the Fed’s March policy meeting. The Fed raised the target range of its benchmark rate by 25 basis points at its meeting on March 13-14 but maintained a median forecast of two more rate hikes in 2018. If the minutes point to slightly more hawkish views by FOMC members than suggested in the meeting statement, the dollar could get an additional lift.

Other data to watch out of the US next week include March import prices on Thursday, followed by the JOLTS job openings for February and the University of Michigan’s preliminary reading of the consumer sentiment index for April, both due on Friday. 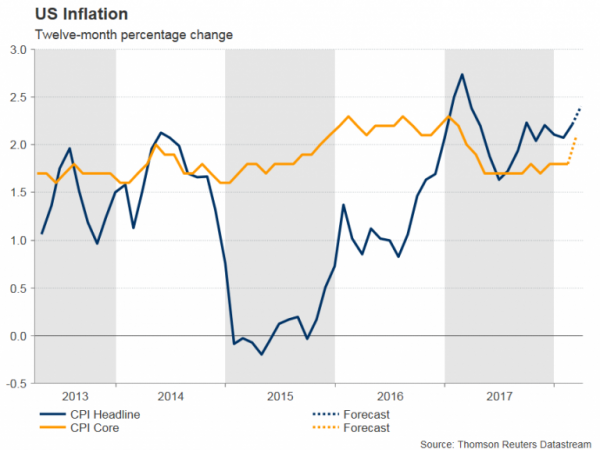