RBA Meeting: Neutral, With a Hint of Caution?

The Reserve Bank of Australia (RBA) will announce its policy decision on Tuesday, at 0430 GMT. The Bank is widely expected to keep rates on hold, so once again, attention will be on the accompanying statement. Given mixed developments since the latest meeting, the RBA is likely to stick to its neutral script overall. In case there is a shift in language though, it may be towards a more cautious direction.

Economic developments since the RBA last met in early April have been mixed, on balance, reaffirming the Bank’s stance that interest rates in Australia are likely to remain unchanged for a long time still.

Kicking off with economic data, the labor market cooled in March. Although the unemployment rate held steady, the labor force participation rate fell while the net change in employment barely rose, pointing to a labor market that is moderating. On the inflation front, the headline CPI rate for Q1 remained unchanged at 1.9% in yearly terms, missing the market consensus of an increase to 2.0%. That said, the Bank’s own forecasts expect the CPI rate to rest only at 2.0% in Q2, so a 1.9% print in Q1 will hardly be surprising or worrisome for policymakers. On a positive note, consumer spending appears to have picked up some steam in Q1, with retail sales for February rising by more than projected. 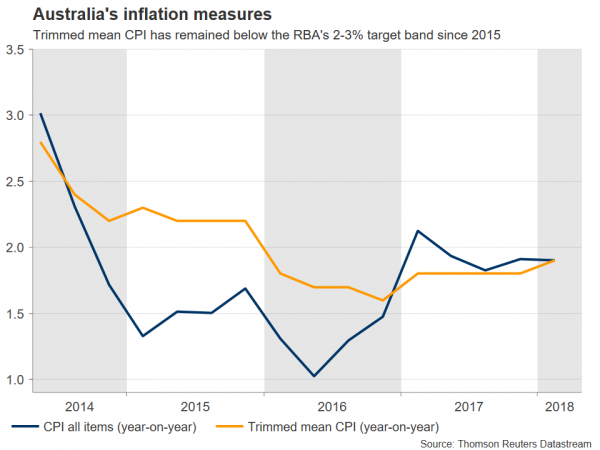 In other developments, the Australian dollar fell in the latter part of April, touching fresh lows for 2018. A depreciating currency is often viewed as a pleasant development for central banks struggling to hit their inflation targets, as it boosts the price of imports and thereby, the broader inflation rate. Indeed, the RBA has been vocal about the aussie lately, consistently noting that an appreciating exchange rate could weigh both on inflation and growth. Thus, the currency’s tumble will likely be welcomed by policymakers.

What will be unwelcomed, however, is the tightening in financial conditions that has occurred in April. Even though the RBA is maintaining its own borrowing costs unchanged, the rising bond yields and expectations for faster tightening in the US appear to be spilling over into slightly higher interest rates for Australian banks too. This is likely to be worrisome for the RBA, as it could slowly begin to manifest itself into the real economy, for example via higher mortgage rates for Australian borrowers.

All the above suggest the RBA is unlikely to make any major changes to its communication this week. The Bank is likely to stick to its neutral script, indirectly reaffirming that there’s no move in interest rates on the horizon. If anything, a change in language may see the assessment become slightly more cautious, amid signs of cooling in the labor market and rising interest rates internationally. Not to mention the still-looming trade frictions between the US and China.

At the time of writing, market pricing implies a mere 18% probability for a rate increase this year. Should the RBA’s assessment reinforce the narrative that rates will remain on hold throughout 2018, that probability could edge even lower, and the Aussie may come under renewed selling interest. Declines in aussie/dollar could encounter initial support near the psychological barrier of 0.7500, which also halted the pair’s decline on December 7. Further down, the 0.7450 barrier could come into play, defined by the lows of September 13.

On the upside, and in case the RBA’s tone is seen as containing a hint of optimism, advances in aussie/dollar could meet immediate resistance around 0.7585, the high of April 27. If the bulls manage to overcome that zone, then sell orders may be found near 0.7640, an area marked by the March 29 lows.

Finally, it should be noted that besides the rate decision, RBA Governor Lowe will also be speaking at a dinner organized by the RBA on the same day, a few hours after the decision. Any remarks on policy are likely to attract attention, and could impact price action in aussie/dollar.