As the US dollar continues to power ahead, the beleaguered euro and pound will be seeking for some reprieve from key economic indicators out of the Eurozone and the United Kingdom next week. With the US calendar being lighter in the coming seven days, the greenback may lose some steam, though the FOMC minutes could still keep the dollar bulls happy. In other data, trade figures out of Japan and New Zealand will be watched.

After reporting worse-than-expected growth figures for the March quarter this week, trade numbers out of Japan will come into focus on Monday for clues as to whether the economy is improving in the second quarter. Japanese exports are expected to jump by 8.1% year-on-year in April, rebounding from 2.1% growth in March. Imports are also forecast for robust growth, rising by 9.6% y/y. Equally important will be Wednesday’s flash manufacturing PMI for May. A strong set of figures next week would reinforce the view that the first quarter weakness was temporary. However, signs that the Japanese economy continues to lose momentum would further bolster the dollar/yen pair. 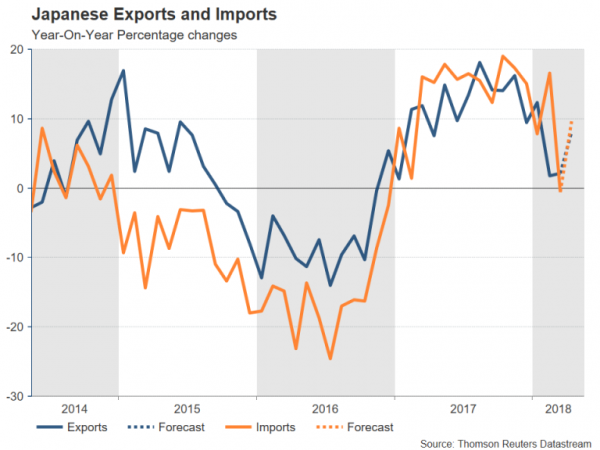 The New Zealand dollar made another push higher this week after tumbling to a 5-month low of $0.6849, but that attempt didn’t last long as the greenback rally picked up speed again. Retail sales figures for the first quarter, due on Monday, could help the kiwi make a more convincing recovery if the strong consumer spending seen at the end of last year carries through to 2018. Trade data will also be watched by kiwi traders, due on Thursday.

The flash reading of the May PMIs for the Eurozone will be the main focus for the euro next week, as the single currency battles a bullish dollar and political uncertainty in Italy near 5-month lows. The reports from IHS Markit due on Wednesday will include the manufacturing, services and composite PMIs. Both the manufacturing and services PMIs are forecast to slip marginally to 56.0 and 54.6, respectively, in May. Another closely monitored survey will be Friday’s Ifo business confidence gauge out of Germany. The Ifo business climate index is not expected to point to any immediate recovery in economic sentiment in the region either, as it’s forecast to deteriorate further to 101.9 in May. 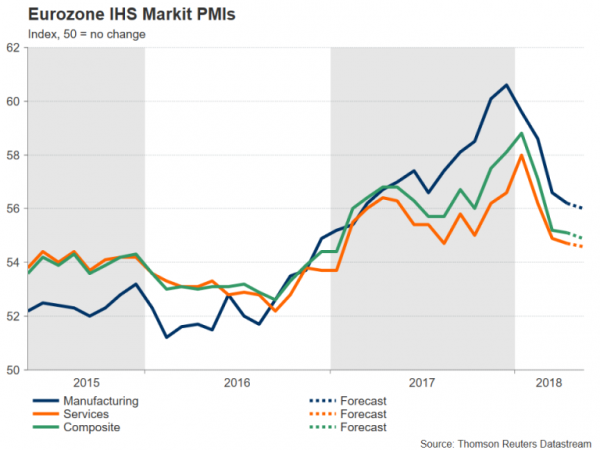 However, the euro could nevertheless get a significant boost from any upside surprises to the data, especially as it’s looking oversold at the moment. Traders should be wary though of a possible knock back from the European Central Bank’s account of the May policy meeting out on Thursday. The minutes are likely to reiterate that underlying inflation in the Eurozone remains low and will avoid a commitment to a QE exit timeline.

The UK will see some major releases next week with inflation, retail sales and GDP indicators on the agenda. Inflation data for April are due on Wednesday. Last month, an unexpected drop in headline inflation to 2.5% led to a sell-off in the pound, as investors sharply reduced their bets that the Bank of England would raise rates at its May meeting. The 12-month CPI rate is expected to remain unchanged at 2.5% y/y in April, while the core rate is forecast to moderate from 2.3% to 2.2% y/y.

Another weaker-than-expected inflation reading next week would further dent expectations about the BoE raising interest rates anytime soon. However, should the numbers point to an acceleration in consumer prices, the pound would benefit from fresh rate-hike speculation. 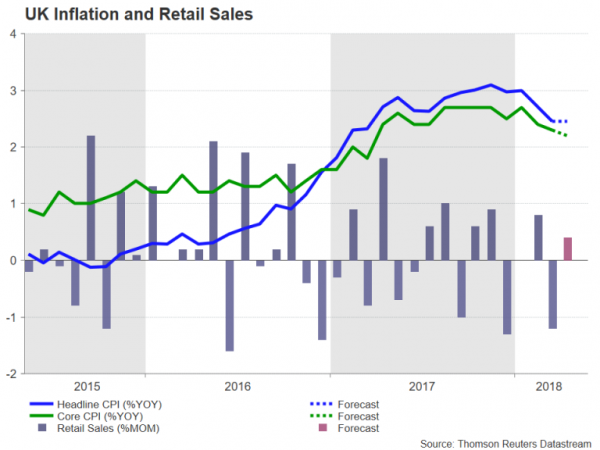 Retail sales on Thursday will also be keenly awaited as any evidence of a pick up in consumer spending would ease concerns about a prolonged slowdown in the UK economy. Retail sales are forecast to rise by 0.4% month-on-month in April, after plunging by 1.2% in March. On Friday, the second estimate of GDP growth for the first quarter will be published. A confirmation of the preliminary 0.1% print isn’t likely to see too much reaction in forex markets, but an upward revision could increase the odds that the BoE would raise rates sooner (August) rather than later (November).

In the meantime, traders will get the chance to hear the latest views from BoE Governor Mark Carney when he testifies before Parliament’s Treasury Select Committee on Tuesday.

Quieter week for the US

US data will take a backseat next week with the main releases consisting of the flash PMIs, housing figures and durable goods orders. IHS Markit will publish its flash PMIs for May on Wednesday. The services PMI is forecast to improve somewhat in May, but the manufacturing PMI is expected to ease slightly, with both indices holding comfortably above the 50-neutral level. New home sales are also due on Wednesday and will be followed by existing home sales on Thursday. Attention will then move on to the April durable goods orders on Friday. Durable goods orders are expected to post a decline of 1.4% m/m in April after two straight months of growth. Also out on Friday, is the final reading of the University of Michigan’s consumer sentiment index for May.

The absence of headline-grabbing data may lead the dollar to a period of consolidation following this week’s strong gains. However, there may still be some fresh buy signals and that could come from the Fed’s minutes of the May 1-2 policy meeting. The minutes, due on Wednesday, will likely flag a rate hike at the next meeting in June and maintain that further gradual increases in the fed funds rate are warranted. Investors will be watching though for any changes to the language used on inflation for clues as to whether the FOMC is tilting towards four rate hikes in 2018.