AUDUSD has dipped back beneath the Ichimoku cloud rekindling the dominant bearish tone, after the 100-day simple moving average (SMA) directed the price lower. The gradual decline in the SMAs is suggesting the downward trend in the pair may endure.

The Ichimoku lines are indicating that negative forces have been jump started, while the short-term oscillators are skewed to the downside. The MACD is pushing lower beneath its red trigger and zero lines, while the RSI is gliding lower in the bearish region. The stochastic lines are flirting with the 20 oversold level, promoting additional losses in the pair. Should they clearly move into oversold territory with force, this could confirm downward pressure is intensifying.

Otherwise, if buyers re-emerge, they face a congested upward path of resistance starting from the cloud’s lower band at 0.7147. Now, the overwhelming zone of resistance begins from 0.7147 and could stretch up till the cloud’s ceiling at 0.7274. That said, the pair would need to initially thrust into the cloud and overstep the 50-day SMA at 0.7171 – along with the adjacent Ichimoku lines – before propelling for the 100-day SMA, which is near the ceiling of the cloud. From here, the neighbouring 0.7314 high and restrictive trendline, pulled from the 0.7890 peak, may try to mute upside momentum from challenging the resistance band between the 0.7370 high and the 200-day SMA.

Summarizing, AUDUSD is sustaining a bearish bearing beneath the SMAs, the 0.7314 high and the descending diagonal line. That said, a break below 0.6963-0.7020 could reinforce the bearish bias, while a climb above 0.7400 could be a convincing signal boosting optimism in the pair. 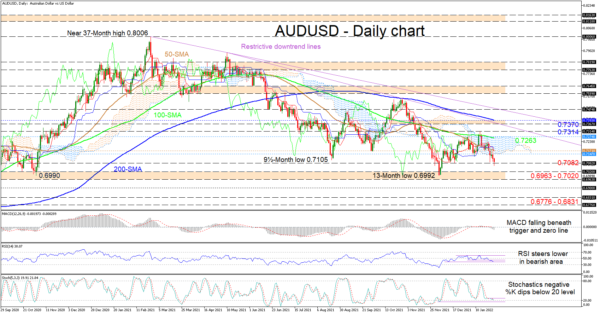