Chinese Economy Weakest in Almost Three Decades. Growth Could Fall Below 6% by Year-End.

Concerning major activity data in June, industrial production grew +6.3% y/y, picking up from +5% in May. The improvement came from a low base and a narrowed contraction in metal smelting. 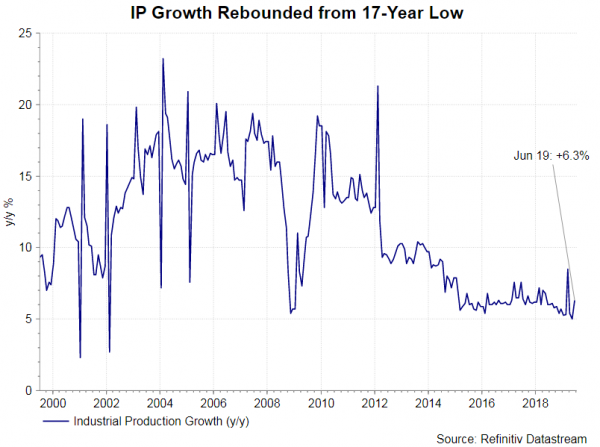 Retail sales jumped +9.8% y/y in June , after gaining +8.6% a month ago. The strong growth, probably coming from front-loaded auto sales, would likely dissipate in coming months.

As we mentioned in the previous report, China’s monetary policy would stay accommodative. We believe of a rate cut has increased, given Fed funds rate cuts later this year are a done deal. PBOC would continue to cut RRR. As Premier Li Keqiang noted recently, the government would cut the RRR to help reduce funding costs for SMEs. Meanwhile, Sun Guofeng, director of the central bank’s Monetary Policy, suggested last Friday that the central bank would, in addition to the traditional monetary measures,  continue to deepen market-oriented interest rate reforms to lower the loan interest rates especially for SMEs.