The forex markets are relatively steady today as sentiments stabilized a bit. Yen and Sterling are so far the strongest ones today but for different reasons. The Japanese Yen is digesting this week’s strong risk aversion move, and seller could gather much momentum. Meanwhile, Sterling trying to pare back this week’s decline as markets await BoE rate decision tomorrow. The more notable move is indeed seen in New Zealand Dollar, which is catching up in the race as the biggest loser this week. AUD/NZD’s rebound from 1.0656 support is seen as the main trigger as the selloff in the Kiwi.

In other markets, US futures point to slightly higher open and DOW could have triple digit gain at initial trading. European indices are also mildly higher, with FTSE up 0.9%, DAX and CAC up more than 0.3% at the time of writing. China’s Shanghai composite ended 0.27% higher, Nikkei gained 1.24%. WTI crude oil continue to recover and is now at 65.4, awaiting oil inventory and OPEC decision on production raise. Gold, now at 1275, stays weak after this week’s sharp decline is struggles to find any moment to regain 1300.

Technically, Yen remains on the driving seat but it’ just awaiting another wave of buying. The step up in trade tensions and verbal attacks between the US and China has taken the Yen so far. Some more inspiration is needed to push the Yen further.

European Commission formally announced retaliation to US steel and aluminum tariffs today. The total EU exports to the US affected by the US measures is at EUR 6.4B. For now, EU will target US products in EUR 2.8B worth first, effective on Friday June 22. Duties on the remaining EUR 3.6B in US goods will take place at a later stage, “in three years’ time or after a positive finding in WTO dispute settlements.

Commissioner for Trade Cecilia Malmström said: “We did not want to be in this position. However, the unilateral and unjustified decision of the US to impose steel and aluminium tariffs on the EU means that we are left with no other choice. The rules of international trade, which we have developed over the years hand in hand with our American partners, cannot be violated without a reaction from our side. Our response is measured, proportionate and fully in line with WTO rules. Needless to say, if the US removes its tariffs, our measures will also be removed.”

BoJ released minutes of the April 26-27 meeting today. The only surprise out of that meeting was that BoJ dropped the time frame it set for achieving the 2% inflation target. The minutes provided more details on the discussions. Many members believed that the timing of reaching the 2% inflation was “merely a projection”. At the some time, “some market participants perceived this projection as a deadline for achieving 2 percent inflation, linking changes in said timing to policy adjustments, and this view was deeply entrenched among them.”

Some members expressed that “attracting excessive attention merely to forecast figures would not be appropriate from the perspective of communication with the markets”. And, most members expressed that ” it was appropriate to cease providing a description on the projected timing of achieving the price stability target”. And that was with the aim to clarify that the timing was “not a specific deadline” for meeting inflation target. Nonetheless, one member expressed the concern that dropping the time frame could “weaken the effects of the commitment” of BoJ to hit target.

Sentiments of Asian Business deteriorated in Q2 according to a survey by Thomson Reuters and INSEAD, over June 1-15. The sentiment index, representing six-month outlook from 61 firms, dropped -5pts to 74 in Q2. It hit a seven-year high of 79 in Q1. That’s also the first decline since September 2017 even though reading above 50 still indicates a positive outlook.

Antonio Fatas, a Singapore-based economics professor at global business school INSEAD, said in the released that “Trade war is not a risk but a reality.” He added that “U.S. tariffs are going up against China but also against some of its traditional allies, such as Canada and the European Union. They are all about to retaliate and today we do not see an easy way out.” Fatas also said “companies can try to go around tariffs by moving production to other countries, this is costly and inefficient. It is a short-term solution but not optimal.”

BoE will most likely keep the Bank Rate unchanged at 0.50% tomorrow. Known hawks Ian McCafferty and Michael Saunders are expected to vote for rate hike while others would vote for standing pat. There will be no inflation report but just the meeting minutes. And attention will on whether the minutes give any hint on an August hike.

According to the latest Bloomberg survey, only 55% of respondents forecast a hike in August. That’s even down from 60% in a similar survey in May. The economists projected UK economy to growth 1.4% in 2018, better than May projection of 1.3%, after some positive economic data. Inflation forecast was unchanged at 2.5% yoy in 2018 and 2.1% yoy in 2019.

One side note to mention is that McCafferty will end his term on August 31. He will be replaced by Jonathan Haskel, an professor of economics at Imperial College Business School. At this point, it’s unsure how the replace with reshape the MPC. 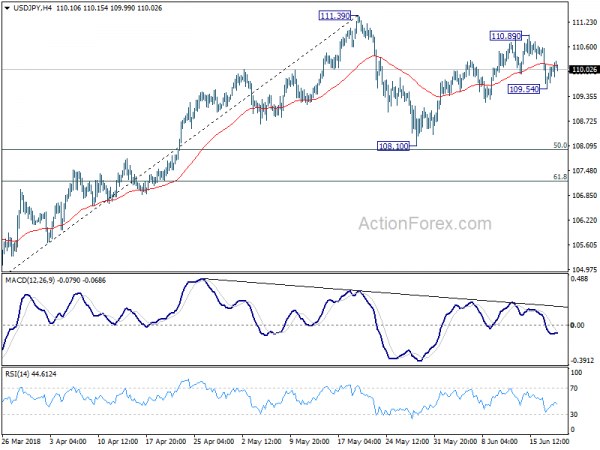 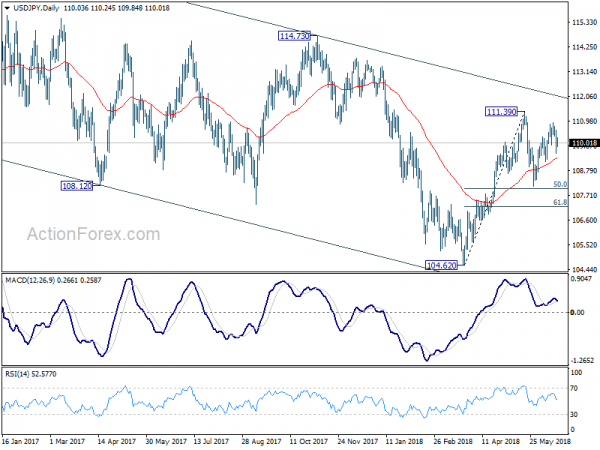