Risk aversions dominate the markets today starting from China, spreading to Asia and Europe. Escalation of trade tensions is the main driving force as the Section 301 tariffs and China’s retaliation are set to come to effect this week on July 6. After his threat to impose auto tariffs, Trump stepped up with his confrontation to the European Union, as he called EU “as bad as China, just smaller.” Such over-the-top comments are clearly unwelcome by the markets.

In the currency markets, Dollar continues to ride on trade war fear and is trading as the strongest one for today so far. Yen is back in form on risk aversion, trading as the second strongest. Australian Dollar and New Zealand Dollar are taking turns to be the weakest. Canadian Dollar escape as selloff with a little help from resilient oil price.

Technically, EUR/AUD’s break of 1.5823 minor resistance indicates resumption of recent rebound from 1.5271. AUD/USD’s with today’s decline, is having its sight on 0.7328 key cluster support again.

Trump’s provocative approach in handling trade international relations is starting to back fire in his own yard. , US ambassador to Estonia James D. Melville Jr., who served under six presidents and 11 secretaries of state, announced his early retirement because he cannot tolerate Trump any more.

He said in his private Facebook post that “For the President to say the EU was ‘set up to take advantage of the United States, to attack our piggy bank,’ or that ‘NATO is as bad as NAFTA’ is not only factually wrong, but proves to me that it’s time to go.” And it should be noted that came less that two weeks ahead of NATO summit in Brussels on July 11, 12.

Besides, Reuters reported that the US Chamber of Commerce is launching a campaign today to attack Trump’s protectionist trade policy. It’s believed that state-by-state analysis would be used for the campaign and it will warn that Americans that Trump is risking a global trade war that will eventually hit their pockets.

Chamber President Tom Donohue was quoted saying that “the administration is threatening to undermine the economic progress it worked so hard to achieve.” And he added that “we should seek free and fair trade, but this is just not the way to do it.”

Being the largest business group in the US with 3 million members, the Chamber also have long history of being friendly with Republicans. Their stance carries some political significance.

UK PMI manufacturing rose to 54.4, revival remains in some doubt

UK PMI manufacturing rose 0.1 to 54.4 in June, above expectation of 53.5. Markit noted that output growth slowed from May’s give month high. Meanwhile, input cost inflation picked up, leading to increased selling prices. Rob Dobson, Director at IHS Markit, said in the released that the sector ended Q2 on a “subdued footing”. Manufacturing were “increasingly reliant on backlogs of work and inventory building” due to slow downside new order grow. And such position “cannot be sustained far beyond the immediate horizon”. He added that “ongoing supply-chain disruptions, including raw material shortages, and signs of a renewed upswing in input price inflation may also jeopardise stronger manufacturing growth”. And “the UK economy will need to look to other sectors if GDP growth is to match expectations in the latter half of the year”

Chris Williamson, Chief Business Economist at IHS Markit said in the release that “the biggest concern is the extent to which export order book growth has cooled since the start of the year, and could soon go into decline. “The survey reveals mounting worries from companies relating to the impact of tariffs and trade wars, suggesting firms are bracing themselves for the potential for further export losses.” “”At the same time there are signs that political uncertainty is also dampening business spirits, most evidently in Italy, which was consequently the second-worst performer of all countries surveyed in June ahead of France.”

Also from Eurozone, Unemployment rate was unchanged at 8.4% in May. From Swiss, SVME PMI dropped to 61.1 in June, retail sales dropped -0.1% yoy in May.

Japan PMI manufacturing revised down to 53.0

Japan PMI manufacturing was finalized at 53.0 in June, revised down from 53.1. Joe Hayes, Economist at IHS Markit noted that “Japan manufacturing PMI data continue to signal that the sector’s current expansion phase still has legs. Output growth edged up in June, supported by further inflows of new work and an accelerated rate of employment growth.” However, “concerns do remain however, as new order growth eased to a ten-month low and export sales decreased for the first time since August 2016. Moreover, with input price inflation jumping to a three-and-a-half year high, manufacturers may be forced to absorb higher cost burdens in order to remain competitive, particularly if the yen faces further safe haven demand.”

China Caxin PMI manufacturing dropped 0.1 to 51.0 in June, met expectations. Dr. Zhengsheng Zhong, Director of Macroeconomic Analysis at CEBM Group said in the release that “index for new export orders fell to a low for the year so far and remained in contraction territory, pointing to a grim export situation amid escalating trade disputes between China and the U.S., which led to weak demand across the manufacturing sector.” Also, “employment index dropped for the second consecutive month, indicating worsening layoffs.” “Overall, the manufacturing PMI survey pointed to strengthening price pressures in June. Deteriorating exports and weak employment, along with companies’ destocking and poor capital turnover, put pressure on the manufacturing sector.”

Released over the weekend, the official China PMI manufacturing dropped -0.4 to 51.5 in June. Official PMI non-manufacturing rose 0.1 to 55.0.

RBA rate decision and statement are something that’s worth a watch in the upcoming Asian session. There is no doubt that RBA will keep interest rate unchanged at 1.50%. The may problem is that RBA’s communications have been rather confusing recently. In the May meeting minutes released on June 19, RBA omitted the language saying that it is “more likely that the next move in the cash rate would be up, rather than down”. But in between, the meeting and the minutes, Governor Lowe said that it “is likely that the next move in interest rates will be up, not down”. So, what is RBA trying to tell? Lowe ought to make use of this week’s statement to clear the picture.

Also, last week’s more dovish than expected RBNZ statement prompted some speculations that RBA could follow suit. It should be noted that in the background, there is tremendously high risks of escalation in trade tension between the US and China. Based on its close ties with both countries, Australia will inevitably be affected. 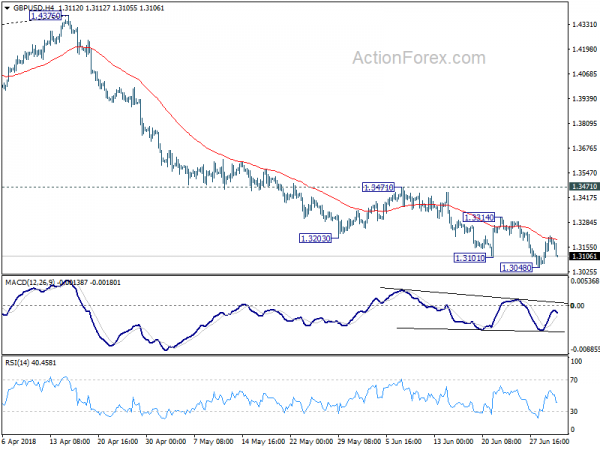 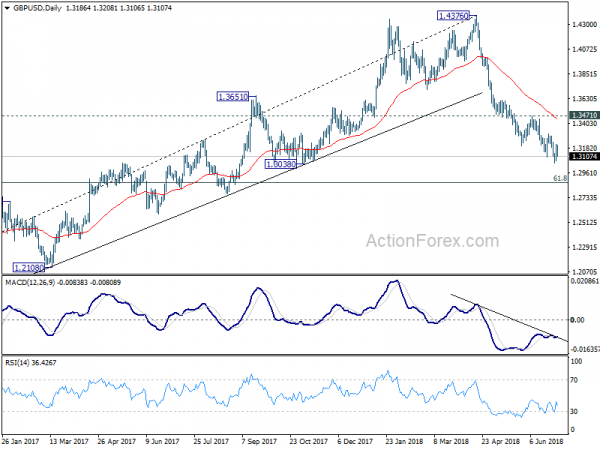