Yen trades broadly lower today, followed by Dollar, as Asian markets recovered broadly. China’s Shanghai SSE composite leads the way by gaining 1.9% and breaches 2800 handle. It looks like some solid support was obtained between 2016 low at 2638 and 2700 psychological. Current momentum warrants a near term rebound which would likely support other Asian markets too. Nikkei also closed higher by 1.21% at 22052.18. Receding risk aversion is support the Australian Dollar, which is so far trading as the strongest one. Euro follows as the second strongest. Some volatility is seen in Sterling on Brexit jitters. Canadian Dollar also extends recent rebound on anticipation of a BoC rate hike later in the week.

Technically, the immediate level the watch today is 1.3067 in USD/CAD. Firm break will at least extend the pull back from 1.3385 to channel support at 1.2825. That will also raise the chance of medium term reversal, but it’s too early to tell. 0.9855 support in USD/CHF, if broken, will bring Swiss Franc into the rally party against Dollar. Also, break of 130.33 resistance in EUR/JPY will be a solid indication of reversal of the fall from 137.49.

Sterling spiked on Brexit plan but reversed after Davis’s resignation

UK Prime Minister Theresa May appeared to have united her cabinet on the Brexit plan after the locked-up meeting at the Chequers last Friday. A key element of the plan is to establish a UK-EU free trade area with a common rule book for industrial goods and agricultural products. And the UK would commit by treaty to ongoing harmonization with EU rules on goods. However, on services, the UK will strike different arrangements for regulatory flexibility. And for financial services, the UK will seek arrangements that preserve the mutual benefits of integrated markets and protect financial stability. And, with the plan, the UK believed that the problem of Irish border would be avoided an a backstop plan won’t be needed. The full document is expected to be published this week.

Environment Secretary Michael Gove, on the the highest-profile Brexit campaigners, endorsed the plan. He told BBC that “One of the things about politics is that you mustn’t, you shouldn’t, make the perfect the enemy of the good. And one of the things about this compromise is that it unites the cabinet.” And he urged that “All those of us who believe that we want to execute a proper Brexit, and one that is the best deal for Britain, have an opportunity now to get behind the Prime Minister in order to negotiate that deal.”

However, the situation is complicated today as Brexit Minister David Davis resigned as he was not willing to be a “reluctant conscript” to the plan. He complained that “the general direction of policy will leave us in at best a weak negotiating position, and possibly an inescapable one.” And the so called “common rule book” with the EU will hand “control of large swathes of our economy to the EU and is certainly not returning control of our laws”. Separately, it’s reported that Steve Baker, a minister in the Brexit department has also resigned.

According to the Quarterly Economic Survey of the British Chambers of Commerce (BCC), the UK economic conditions “remain sluggish” despite modest improvement in Q2. The survey showed that the economy is in a “holding pattern” and the annual growth this year is set to be the “lowest since the financial crisis.” It called for a push to “fix the fundamentals” to create a “Brexit hedge”. And the government should provide clarity on the “real-world questions” after Brexit to give businesses a clear path that would enable them to invest and grow.

Adam Marshall, Director General of the BCC also noted in the release that “amid growing international uncertainty, from escalating trade disputes to oil price rises, the UK economy continues to grow at a sluggish rate. Brexit is a key factor – but long-standing structural issues are also holding companies’ growth back.” And he emphasized again that
“Business needs clarity on Brexit, and a strong domestic agenda that creates a ‘Brexit hedge’ as we navigate turbulence over the next few years.”

ECB Coeure: Europe United to respond to US shift from hegemonia to arkhe

ECB Executive Board Member Benoit Coeure the recent developments in trade war “doesn’t have the potential to derail the recovery” of the Eurozone. Just after ECB announced to end the asset purchase program in December, the risks of US-China trade war has turned from rhetorics into reality. And the US is threatening tariffs on European Union autos. But Coeure said that the June monetary policy decision “already takes the risks into account” and there is “no reason to change policy expectations” right now. He added the the impact of trade tensions on business confidence is so far “limited” and “the backdrop is very strong resilient growth in the Eurozone”.

Coeure also delivered a speech titled “Asserting Europe’s Leadership“. He noted that US leader in the past seven decades was “hegemonia” built on “trust and common identities”. But the “America First” policy marked a departure from a “legitimate hegemon”. It’s turning into “arkhe” where “policies and doctrines are imposed on others, without their consent and regardless of the consequences”. And, “international agreements are repealed, the international rule of law is questioned and other nations are challenged.”

Coeure said EU’s response, as seen with ancient Greeks, were alliances against arkhe. That is, “Europe united” against “America first”. In particular, he stressed the importance of “completing the euro area’s architecture” as it’s necessary for Europe to attain other objectives on fostering cooperation on security and defence, speak with one voice on international affairs and to complete the Single Market.

BoJ Governor Haruhiko Kuroda said at a quarterly meeting of regional branch managers that the central bank would maintain its ultra-loose monetary policy until inflation hits 2% target. He added that the economy is expanding moderately and is expected to continue with it. Consumer inflation, however, is moving between 0.5% to 1.0%.

BoJ will continue to pursue current policy under the yield curve control framework for as long as needed. The monetary policy will be adjusted when necessary to maintain economic momentum.

China’s foreign currency reserves rose USD 1.5B in June to USD 3.1121T, up 0.05%. The State Administration of Foreign Exchange spokesperson said that the China’s foreign exchange market was “generally stable”. Due to strength in the US Dollar and change in asset pricing, the overall currency reserve rose slightly.

SAFE also noted that since the start of the year, China’s economy has “maintained a steady trend”. But there were “divergence” in global recovery, heightened trade friction, capital out-flow and currency depreciation pressure in emerging markets. Though, China’s cross-border capital flowed remained stable.

BoC rate hike as the main focus of the week

BoC rate decision is a major focus for the week ahead. After recent comments from Governor Stephen Poloz and solid job data, markets are expecting the central bank to lift policy rate by 25bps to 1.50%. However, as Poloz pointed out too, there are risks to the out that couldn’t be reflected in economic models. For Canada, a major risk is trade tension with the US, with threat of auto tariffs now at stake. Hence, we’d be beware of a dovish hike that signals more cautious path ahead. Suggested reading on BoC: BOC Preview – Rate Hike Fully Priced In, Data and Trade with US Continue to Guide Future Path

On the data front, UK productions will be another set of data needed to solidify the case of an August BoE hike. UK will also report monthly GDP figure for the first time. US will look into CPI and PPI. Other key data include China CPI, PPI and trade balance, German ZEW. ECB will also release monetary meeting accounts. Here are some highlights for the week:: 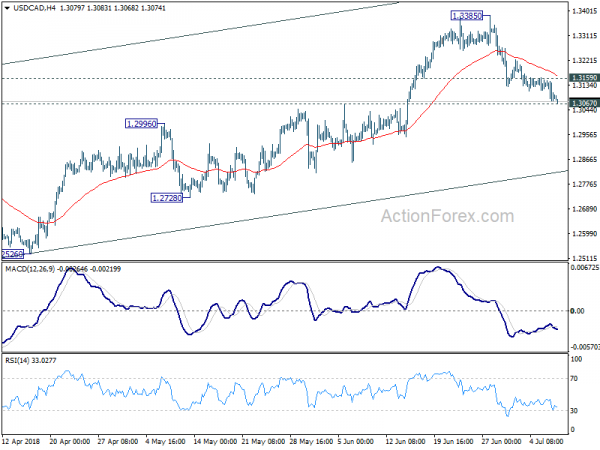 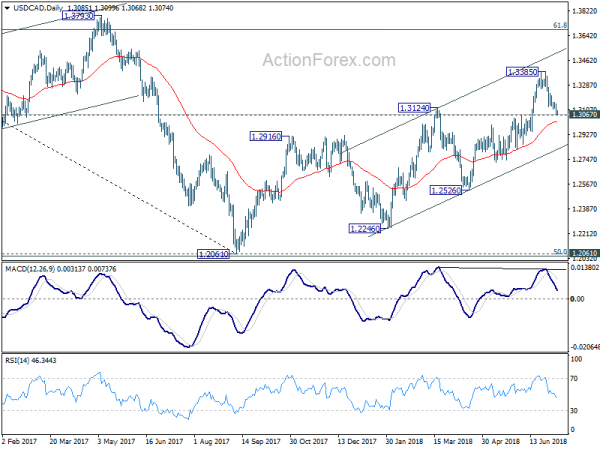 Loonie Extends Its Losses In The Asian Session, On Dovish Bets