The forex markets are rather steady in Asian session today. Dollar is paring some gains and trades slightly lower. But it remains the strongest one for the week together with Canadian Dollar. New Zealand Dollar, however, trades broadly lower as markets expect that RBNZ could be slightly dovish in the upcoming rate decision. Taking about central banks, RBA left cash rate unchanged at 1.50% as widely expected. The announcement is shrugged off by the Australian Dollar as it provides nothing new.

Technically, outlook in Dollar is mixed. EUR/USD is on course for testing 1.1507 key support even though intraday downside momentum is diminishing. GBP/USD is also staying bearish after yesterday’s break of 1.2956 low. But elsewhere, there is no apparent strength in the greenback yet. AUD/USD is bounded in consolidation. USD/JPY and USD/CAD are mixed and could head lower before bottoming. Meanwhile, EUR/JPY and GBP/JPY declines slowed. But the lack of any notable strengthen in recovery affirms near term bearish outlook in both crosses.

RBA kept cash rate unchanged at 1.50%. The accompanying statement is largely unchanged from the prior one. Central forecasts for the Australian economy “remains unchanged”. GDP growth is expected to be “a bit above 3%” in both 2018 and 209. Household consumption remains an uncertainty for the outlook. That’s primarily due to slow growth in income while debt levels are high. Also, RBA noted that drought has led to “difficult conditions in parts of the farm sector”.

Latest inflation data were in line with RBA’s expectations. Inflation is projected to be higher the than current 2.1% in 2019 and 2020. Nonetheless, there could be an interim dip to 1.75% in September quarter this year due to “once-off declines in some administered prices”. Labor market outlook “remains positive” and further decline in unemployment rate is expected over the next few years to around 5%. But wage growth remains slow even though the pace has troughed.

Australian Dollar is steady after the release and focus will turn to Friday’s Monetary Policy Statement.

New Zealand Dollar trades generally lower ahead of RBNZ rate decision on Thursday. The central bank is widely expected to leave the OCR unchanged at 1.75% and deliver a neutral to slightly dovish policy statement. Since the June meeting, data showed that economic growth moderated while inflation picked up. In the job market, the unemployment rate climbed higher to 4.5% in 2Q18.

We expect policymakers to look through the improvement in inflation data and maintain accommodative monetary policy at least until late 2019. The central bank will likely reiterate that the next move in the OCR could be “up or down”. On the updated economic forecasts, we expect the central bank to downgrade the GDP growth projection in light of recent slowdown.

According to the latest monthly Brexit Confidence Tracker by ORB International, confidence on Prime Minister Theresa May regarding Brexit negotiation plunged again to new low in August. There was clear deterioration after the high profile Chequers meeting, which resulted in one white paper and two resignations of key cabinet ministers in Boris Johnson and David Davis.

Only 24% of respondents said they approve of the way May’s government is handling Brexit negotiation. That compares to 40% back in April On the other hand, disapproval surged to 76%.

Meanwhile, only 22% are confidence that May will get the right Brexit deal. 60% believed that May won’t. And the percentage of “don’t know” also dropped 2% to 17%.

Elsewhere, UK BRC retail sales monitor rose 0.5% yoy in July, below expectation of 1.3% yoy. Australia AiG performance of construction index rose to 52.0 in July, up from 50.6. 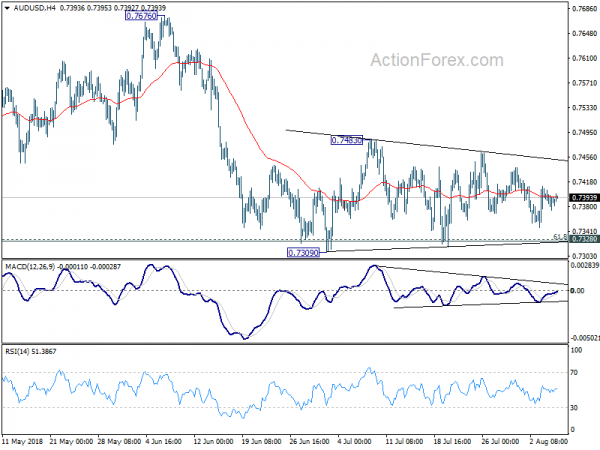 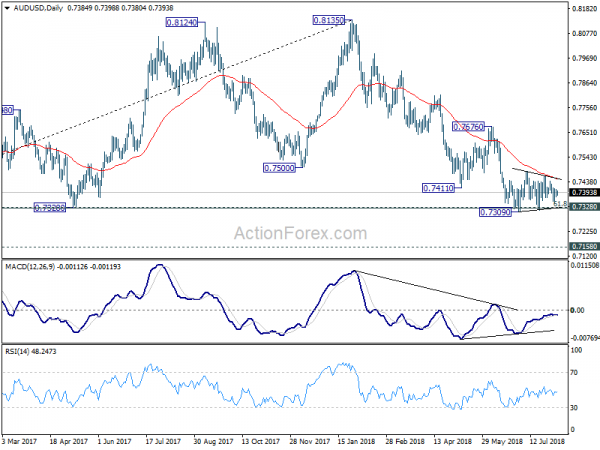