Sterling surged overnight as boosted by comments from EU indicating that they’re committed to a deal Brexit deal with the UK. The Pound remains firm in Asian session and is now the strongest one for the week. Swiss Franc is mixed in Asia but remains the second strongest one. Reemergence of Turkish Lira crisis is a factor that pressures the Euro and lifts the Franc. USD/TRY is now back at 6.47, comparing to 5.69 just two weeks ago, with risk of heading back to 7.00 handle. Canadian Dollar is steady today but it’s the third strongest one for the week. Negotiation between Canada and US appears to be progressing well, and it’s hopeful for a deal by Friday. On the other hand, Australian and New Zealand Dollar are staying as the weakest, with fresh selling seen in Kiwi after terrible business confidence data.

Technically, GBP/USD’s rebound should have confirmed medium term bottoming at 1.2661 and we’d see more upside 1.3316 fibonacci level. EUR/USD is already close to equivalent level at 1.1779. EUR/USD could feel some “heaviness” ahead of 1.1779. Meanwhile, EUR/CHF’s break of 1.1363 suggested that rebound from 1.1242 might have completed earlier than expected at 1.1452 and deeper fall is in favor. On the other hand, it looks like GBP/CHF has bottomed out just ahead of 1.2500 handle. All factors combined could give EUR/GBP extra selling pressure. That is, while EUR/GBP is still trading inside rising channel, such bullishness could be challenged. The interactions between these pairs would be a joy to watch, even if you’re not trading them.

EU Barnier to offer unparalleled partnership to UK after Brexit

EU chief negotiator Michel Barnier said that the EU is prepared to offer a partnership with UK unlike with another other country. That’s seen as a gesture that EU is committed to a deal. Barnier said in Berlin that “we are prepared to offer Britain a partnership such as there never has been with any other third country.” And, “we respect Britain’s red lines scrupulously. In return, they must respect what we are,” he said. “Single market means single market … There is no single market a la carte.”

Brexit Minister Dominic Raab also told the parliament that a Brexit deal with EU was “within our sights” and the negotiation would intensifies as the divorce date approaches. Raab also added that UK’s Brexit plan received positive reactions from EU. He said the plan “had a reasonably positive landing” And “we’re getting a lot of constructive engagement, and … a lot of talk about the practical considerations rather than ‘in principle’ dismissal, and I think that’s valuable from our point of view”.

Canada-US trade deal (NAFTA?) on track for conclusion by Friday

Canadian Dollar softens mildly in Asian session but remains the third strongest for the week, just behind Sterling and Swiss Franc. Progress in Canada-US trade talks appears to be positive. Comments from Trump and Canadian Prime Minister Justin Trudeau suggested that the negotiations are on track to complete by the end of the week.

Trump told reporters that “they (Canada) want to be part of the deal, and we gave until Friday and I think we’re probably on track. We’ll see what happens, but in any event, things are working out very well.” That’s an about turn from his recent hostile comments on Canada.

Trudeau also said “there is a possibility of getting there by Friday”. But he also emphasized that it is only a possibility, because it will hinge on whether or not there is ultimately a good deal for Canada.” He reiterated that “no NAFTA deal is better than a bad NAFTA deal.”

Canadian Foreign Minister Chrystia Freeland, staying in Washington, said “our officials are meeting now and will be meeting until very late tonight. Possibly they’ll be meeting all night long”. And, “this is a very intense moment in the negotiations and we’re trying to get a lot of things done very quickly.”

Mexico’s President Enrique Pena Nieto also said in a local radio interview that “I am optimistic that a trilateral deal can be reached… we have from now until Friday for a deal in principle to be announced.”

New Zealand ANZ business confidence tumbled by a further -5 pts in August to -50. Meanwhile, Activity Outlook was unchanged at 3.8. ANZ noted that “manufacturing is now the least confident sector – likely a lagged impact from construction sector woes”. On the other hand, The services sector is the most optimistic. Also “activity sub-indicators remain weak” and “threat to near-term activity is real.”

It’s a “particularly sharp turnaround” in the manufacturing sector from being the most optimistic in April, to the most pessimistic in August. Manufacturers’ export expectations are holding up. Thus, “this weakness is an echo of construction sector pessimism”. Employment intentions “continue to ease” and are weakest in “agriculture and construction sectors”. And, “it seems increasingly inevitable that wariness amongst firms will have real impacts, in the near term at least, as investment and employment decisions are deferred.”

The Australia Dollar isn’t a good performer this week, but the New Zealand Dollar is even worse. The strong rebound today suggests temporary bottoming at 1.0870 in AUD/NZD. Given that it was close to medium term trend line support, and there is bullish convergence condition in 4 hour MACD, the decline from 1.1174 is likely finished. Focus is back on 1.0991 minor resistance. Break will at least bring a test on 1.1174 high. 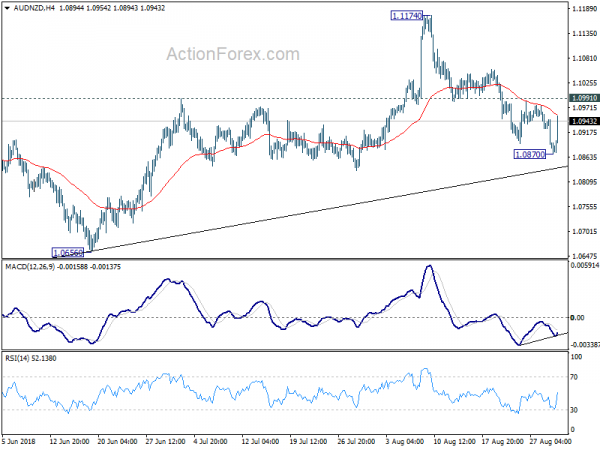 Later in the day, Canada GDP will be featured which might be important for BoC to decide whether hike in September or October. US will release personal income and spending, with focus on PCE core inflation.

GBP/USD’s rebound from 1.2661 extended to as high as 1.3038 so far and intraday bias stays on the upside. Current development suggests medium term bottoming at 1.2661, on bullish convergence condition in daily MACD. Further rise should be seen to 55 day EMA (now at 1.3058) and then 1.3212 resistance. For now, we’d expect strong resistance from 1.3316 fibonacci level to limit upside, at least on first attempt. On the downside, break of 1.2844 support will argue that the rebound is completed and bring retest of 1.2661 low. 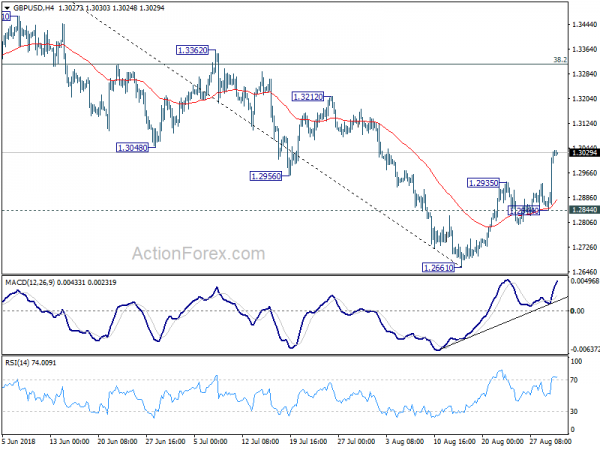 Week Ahead – We Go Again