Dollar strengthens broadly today, in particular against commodity currencies, as global ex-US markets are back in risk averse mode. Trade tensions and emerging market problems are staying as the two main themes that weigh on investors’ sentiments. The greenback is followed by Yen and Sterling as the next strongest. Nonetheless, the Pound showed little reaction despite BoE Carney’s indication that he could stay longer to help Brexit transition. On the other hand, New Zealand Dollar is trading as the weakest one, followed by Canadian Dollar. NAFTA, or US-Canada trade negotiation will restart this week but there is little hope of any progress. Quick udpate: Dollar rally accelerates after ISM surges sharply to 61.3, highest since May 2004.

Technically, USD/CAD’s strong rise and break of 1.3173 resistance indicates that corrective fall from 1.3385 has already completed at 1.2886 already. More importantly, it reaffirms that medium term rise from 2017 low at 1.2061 is still on course for another high above 1.3385. Now, focus will be on 1.1529 in support in EUR/USD and 0.9775 in resistance in USD/CHF to confirm underlying Dollar strength.

At the Inflation Report at the UK Parliament, BoE Governor Mark Carney indicated that he’s willing to stay longer at the central bank. He said it’s a “critical period” and it is “important that everyone does everything they can to help with the transition of exiting the European Union”.

He added that “even though I have already agreed to extend my time to support a smooth Brexit, I am willing to do whatever else I can in order to promote both a smooth Brexit and an effective transition at the Bank of England.”.

Carney also indicated that he has already discussed this issue with the Chancellor, Philip Hammond, and he expects an announcement to be made in due course. It’s generally taken as a hint that Carney will stay beyond June 2019, when the current term expires.

On Brexit, Carney said it’s unlikely for exiting EU without a deal. And, for now the UK economy is operating as if there will be a deal, with less than 20% of business putting in contingency plans.

Regarding impact of “no-deal” Brexit, Chief Economist Andy Haldane says it would be a “material rise in the cost of things in the shops”, particularly imported products. And that would be due to a weaker pound and higher tariffs. Haldane added that the impact could last for a few years, as history shows.

In UK, Philip Rycroft, Permanent Secretary at the Department for Exiting the European Union (DExEU) told the parliament that the plans for no-deal Brexit are “in place”. And, “they are at a level of detail which satisfies the team at DEXEU … we are constantly monitoring those plans to make sure they are kept up to date.” Also Rycroft said there were studies on the economic impact of Prime Minister Theresa May’s Chequers plan and “the work is ongoing”.

According to a Reuters poll conducted between August 29 and September 3, chance of disorderly Brexit stood at 25%, unchanged from a month ago. Opinions were divided as nine of the 34 contributors raised the chance, but four lowered the odds. Highest prediction was 60% chance.

Nevertheless, chance of a recession in the year post-Brexit was seen at 15%, down from July’s 20%. Chance for recessions within two year of Brexit was at 25%.

On BoE policies, the poll suggested that the central bank would have a 25bps rate hike soon after March 2019 Brexit date. Then, another 25bps would be added in 2020.

UK construction PMI dropped notably to 52.9 in August, down from 55.8 and missed expectation of 54.9. Tim Moore Associate Director at IHS Markit said that “the construction sector slipped back into a slower growth phase in August”. But there are “some encouraging takeaways from the latest survey, especially the resilient degree of new business growth in August and a strong upturn in staff recruitment.” However, “the degree of optimism reported in August remained constrained by external factors, including domestic political uncertainty, stretched supply chains and shortages of suitably skilled labour.”

ECB Governing Council member Klaas Knot urged that risk must be reduced before the Eurozone banking union is shared more widely among member states. The measures under the union include bank deposit insurance scheme and streamlining liquidity provision for banks under resolution. Knot argued that “these elements all imply more public risk-sharing in (the European Monetary Union) as liability for bank failures in other countries is shared at the European level.” And he emphasized that ” risk-sharing should be preceded by sufficient risk-reduction.”

Separately, another Governing Council member Vitas Vasiliauskas reiterated the call for an “EU-wide banking union”. And he said that “allow for a centralized supervisory approach for all of the EU’s largest systemically important banks, regardless of host-country membership in the monetary union.” Also, he added that “we need to do a better job at convincing decision-makers in non-euro area countries to enter into the “close cooperation” regime (with the ECB).”

RBA Governor Philip Lowe warned of a number of international uncertainties at in his remarks at the RBA board dinner today. He said escalation in trade disputes would “materially affect trade flows and investment plans around the world.”. And he emphasized that “as a country that has benefited greatly from an open rules-based international system, Australia has a strong interest in this not happening.”

Another risk is “material lift in inflation” in the US. Past experience of “large fiscal stimulus” when economy is at full employment with fast growth suggests that could “lead to inflation increasing significantly.”

Also, RBA is monitoring carefully the financial and economic problems in a number of emerging market economies with structural or institutional weaknesses, including Turkey, Brazil and Argentina.

Today, RBA left the cash rate unchanged at 1.5% for a 25th consecutive month. Similar to previous meetings, policymakers were upbeat over the growth and the employment outlook, while acknowledging soft wage growth and inflation. In short, the central bank is optimistic over the business conditions and higher levels of investment in public infrastructure. It acknowledged the strong growth in employment, projecting the unemployment rate to drop to around 5% over the next couple of years.

The members, however, judged that low inflation and soft wage growth worth ongoing monitor before another rate hike. The policy statement was almost identical to the previous one, with only some changes seen in the assessments of the job market and exchange rate.

USD/CAD surges to as high as 1.3193 today. The break of 1.3173 resistance confirm that corrective pull back from 1.3385 has completed at 1.2886, just ahead of 1.2879 key fibonacci level . Intraday bias stays on the upside for 1.3385 first. Break will resume the whole up trend form 1.2061 and target next key resistance level at 1.3685. On the downside, below 1.3092 minor support will turn intraday bias neutral and bring consolidation first, before staging another rally. 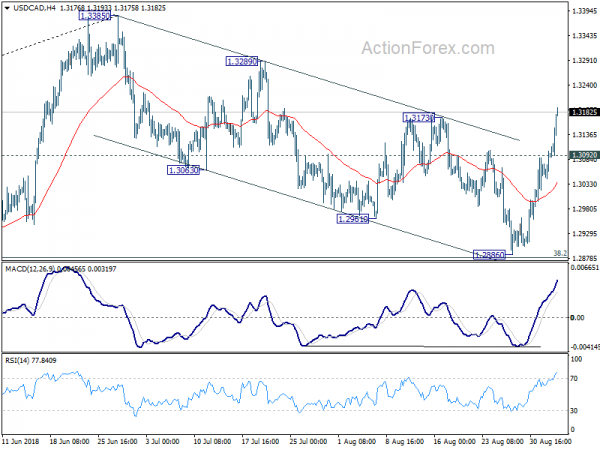 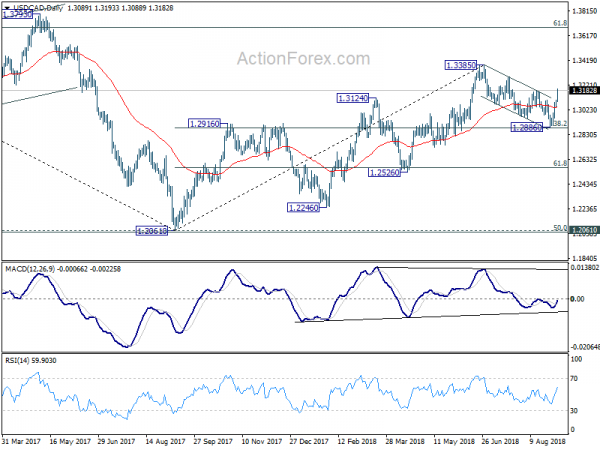