Australian and New Zealand Dollar suffered heavy selling today as risk aversion weighs. Major Asian indices are all in red on trade war worries and selling is intensifying into mid-Asian session. Dollar doesn’t ride on the wave and is trading as the third weakest. But the greenback is seen as just being cautious ahead of Non-Farm Payrolls report. Yen is naturally the strongest one as it’s also lifted by news that Japan is Trump’s next trade target. Canadian Dollar is the second strongest after BoC Wilkins hinted at more rate hike despite NAFTA uncertainties. The Loonie will also look into its job data today.

Technically, USD/JPY’s break of 110.68 minor support suggests that fall from 111.82 has resumed and more downside might be seen. But we’d continue to expect strong support from around 109.90 to contain downside and bring rebound. USD/CAD’s break of 1.3134 minor support suggests more consolidations would be seen before another rally. USD/CHF is now pressing 0.9651 low and the fall from 1.0067 looks ready to resume. EUR/AUD’s rally is also extending through 1.6216 fibonacci projection level.

BoC Senior Deputy Governor Carolyn Wilkins delivered “An Update on Canada’s Economic Resilience” yesterday. The most important part of the speech is that Wilkins said “Our practice is to not incorporate scenarios that have yet to occur, even though they may be the subject of ongoing discussions” And, risks of trade tensions “are not just on the downside”, but “there is some significant upside as well.” She emphasized that trade developments can result in “complex trade-offs for monetary policy.” And, after considering all factors, “the bottom line is that Governing Council agreed that the gradual approach we have been following is still appropriate.”

In short, Wilkins suggested that BoC is still on course for further rate hikes despite uncertainty of NAFTA negotiations. And that gave a nod to market expectation of an October hike. Canadian Dollar was lifted by her speech.

In the speech, she noted that most recent data indicates growth to “average near potential” over the new few years. Q2’s strong rebound in GDP, 2.9% annualized, supported the central bank’s July rate hike. She added that quarterly profile of GDP growth will be “volatile” for the rest of 2018, but to “still average around 2%”. Even though temporary factors that pushed up exports in Q2 will unwind in Q3, the factors “do not point to weaker underlying momentum”.

On inflation, she noted that wages were rising “less quickly” than expected in an economy that’s “near capacity”. And this is “still the case”. July’s headline inflation data “surprised” on the upside at 3% because of “temporary factors” but not “pressure from excess demand”. Instead, core measures remained at around 2% “supporting our assessment that the inflation increase will be temporary.”

On trade tensions, Wilkins said they’re “among several factors keeping them from investing in new capacity”. BoC estimated that “combination of reduced confidence and trade measures already taken will shave about two-thirds of 1 per cent from GDP in Canada by 2020”. Canada’s countermeasures on trade will “temporarily boost inflation by about 0.1 percentage point until the third quarter of 2019.” She also emphasized that trade developments can result in “complex trade-offs for monetary policy”. On the one hand, protectionist measures can be costly in terms of growth and incomes. On the other hand, protectionist measures create risks to the upside for inflation, especially when the economy is operating near full capacity.

NAFTA negotiation between US and Canada continued to drag on with no concrete results after yesterday’s meeting. Canadian Foreign Minister Chrystia Freeland just repeated her words that “we are making good progress,” discussions were “constructive and productive” with “goodwill on both sides.” But the key issues were unresolved and expectation is low for a deal to be made this week.

The Chapter 19 dispute resolution mechanism remained a sticky point. Canadian Prime Minister Justin Trudeau insisted on having the mechanism as Trump is a president “who doesn’t always follow the rules as they’re laid out.” Another deadlock is diary quota which Canada might concede some ground, but based on condition that others issues are satisfactorily resolved. The third issue is the cultural exemptions to protect Canadian media company, which Trudeau said they’re important to Canada’s national sovereignty and identity.

Chicago Fed published yesterday a speech of its President Charles Evans titled “Back to the Future of Monetary Policy“, originally intended to be delivered to a conference earlier this week in Argentina.

There Evans reiterated his stance that Fed the current economic outlook “entail moving policy first toward a neutral setting and then likely a bit beyond neutral”. That was for helping the transition of the economy onto a “long-run sustainable growth path with inflation at our symmetric 2 percent target.”

He added that “we may need to tighten somewhat further if currently unexpected tailwinds emerge that push the economy well beyond sustainable growth and employment levels, potentially leading to unacceptably high inflation beyond our symmetric objective.” For example, “forward momentum imparted by earlier monetary accommodation” might be underestimated. And, there could be “greater-than-expected fiscal impetus from the recent tax cuts and spending increase”.

On the other hand, “the emergence of currently unexpected headwinds could dictate a shallower policy path.” For example, trade uncertainties could generate “adverse effects on business sentiment and spending”. And, “firming in inflation expectations could stall out before expectations are clearly centered about 2 percent”.

Boston Fed President Eric Rosengren warned in a paper, to be presented at a conference this week end, that the current policy buffers , “may not be sufficient to offset future shocks, reducing the capacity available to policymakers to insulate the economy from future adverse shocks”. And he urged “more attention should be given to establishing appropriate policy buffers to mitigate future shocks.”

And, Fed should either build a “larger monetary policy buffer” or be ready to use unconventional tools more aggressively. He added that “these tools have proven to be politically controversial, making their aggressive deployment, or even their deployment at all, less certain in response to a future economic downturn.”

USDJPY dipped as Japan could be Trump’s next trade target

USD/JPY weakened notably over night and took out 110.68 minor support. Risk aversion could be a factor with NASDAQ losing -0.91% to close at 7922.73, and broke 7933.31 near term resistance turned support. US treasury yield also softened with 10 year yield closed down -0.79 at 2.879. Another factor behind the move could be reports that Trump is target Japan next on his trade policy.

The news started with WSJ’s James Freeman, which Trump called after the former praised his tax and regulatory reforms on Fox News. Freeman wrote that “the President sees a problem and even if he wraps up negotiations with our friends in North America and Europe, the trade uncertainty won’t necessarily end.” And, “seems that he is still bothered by the terms of U.S. trade with Japan.” Freeman also noted that Trump “described his good relations with the Japanese leadership but then added: ‘Of course that will end as soon as I tell them how much they have to pay.'”

We’d like to emphasize that we’re skeptical about the news. What is the purpose of a President calling a writer of the fake news media to leak some information? It doesn’t make much sense to us.

The major focuses of the day are employment data from US and Canada. US non-farm payroll is expected to show 194k growth in August. Unemployment rate is expected to be unchanged at 3.9%. Again, attention will be on wage growth as average hourly earnings are expected to rise 0.3% mom. 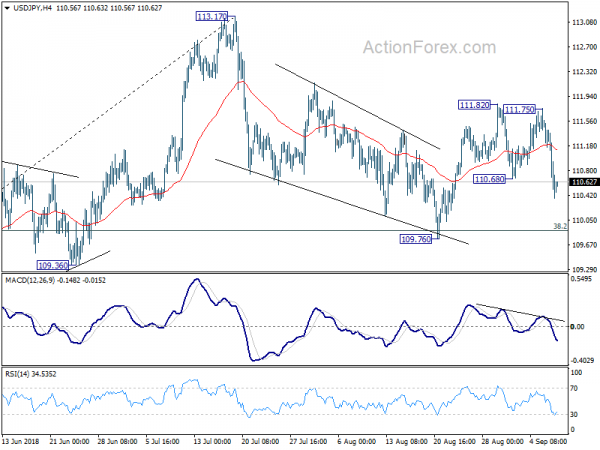 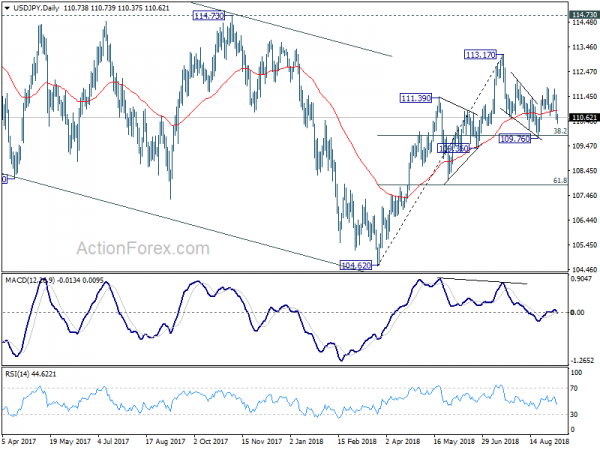 Bank of Canada Brings Policy Rate Back to Crisis Low