Australian Dollar rises broadly today as boosted by strong rally in Chinese stocks. The Shanghai SSE composite is pushed through 2800 psychological level on news that MSCI is considering increasing A shares weighting significantly. Nonetheless, Aussie is out-performed by New Zealand Dollar for now, on strong rebound in business confidence. Sterling is the weakest one in Asia as this week’s rebound lost steam, followed by Euro. Dollar is mixed as the highly anticipated Fed rate hike is awaited.

Technically, Dollar is refusing to commit to a sustainable rebound yet. In particular, for Dollar bulls, the failure to break 0.7228 minor support in AUD/USD and 1.2975 minor resistance in USD/CAD is disappointing. These two levels will be watched together with 1.1723 minor support in EUR/USD, 1.3042 minor support in GBP/USD. However, it could be another way round if Fed delivers something dovish, we’ll see Dollar’s recent corrective fall extends.

Chinese stocks rise sharply higher today on news that MSCI is considering to increase its A shares in the MSCI indexes. MSCI noted that the 5% initial inclusion of China A implemented in May and August 2018 got “overwhelming positive feedback from market participants”. It’s has now launched a consultation on further weight increase. The investment community could provide MSCI with proposals till February 15, 2019 and the decision would be made on or before February 28, 2019.

The current proposals including adding the weight of China A Large Cap securities from 5% to 7% in two phases, 7.5% each in May and August 2019. Also ChiNext could be added to the list of eligible stock exchange segments in May 2019. China A Mid-Cap securities with 20% included factor in one phase in May 2020.

The Asian Development Bank lowered China’s 2019 growth forecast from 6.4% to 6.3%. For 2018, growth projection was kept unchanged at 6.6%. It cited “slower demand growth and an unfavorable trade environment” as the reasons for the downgrade. On US-China trade conflict, ABD said it could “deflate consumer and investor confidence, severely disrupt supply chains, impede technology transfer and foreign investment, and hit export-oriented industries in the PRC. ”

ADB Chief Economist Yasuyuki Sawada said, “services and consumption will continue lifting the PRC’s economy for the rest of 2018 although slower growth is expected next year, as ongoing trade tensions with the United States (US) are expected to affect net exports.” He added that “supportive monetary and fiscal policy will help ease the short-run strains” But also urged that “continued reform progress is needed to sustain future growth.”

Looking at the details, net exports are expected to hold back GDP growth for the rest of 2018 and 2019 as ” trade tensions with the US continue to intensify, coupled with a dimmer outlook on global trade and investment activities.” ADB expected current account surplus of China to lower to 0.7% in 2018 and further down to 0.2% in 2019.

For developing Asia as a whole, growth in 2018 is expected meet 6.0% forecast. However, 2019 growth projection was also trimmed by -0.1% to 5.8%. The US-China trade measures implemented by September 24 are expected to lower China GDP by -0.5% and US GDP by -0.1%. And they would have a “negligible effect on the rest of developing Asia”. It also noted that “with the trade conflict escalation, the US trade deficit with the PRC would shrink, but the overall US trade deficit would not change much as US imports would be redirected to other countries while US exports to the PRC declined.”

Also, ADB warned that “prolonged trade conflict can damage confidence and deter investment. This indirect fallout will be large for many economies in the region and globally, especially if automobiles and other parts become embroiled in the trade conflict.”

New Zealand ANZ Business Confidence had a notable bounce by 12 pts to -38 in September. While’s it’s still a negative reading, it’s already the highest level since May. Own activity index also rose 4 pts to 8.

ANZ noted in the release that It is encouraging that nearly all activity indicators out of the ANZ Business Outlook survey rebounded this month, with only investment intentions deteriorating further. The growth signal coming out of the survey remains weak, certainly. But if the indicators continue to rebound, it will increase the odds that while the economy may have hit a pothole, the wheels are not falling off.

On RBNZ, ANZ said the Reserve Bank made it clear in the August Monetary Policy Statement that they believe the economy needs to accelerate to get inflation sustainably back to the target midpoint in an acceptable timeframe. We expect that at the OCR Review this week the message will therefore continue to be that the next move in the Official Cash Rate “could be up or down”, despite the stronger-than-expected June quarter GDP outturn.

New Zealand trade deficit widened sharply to NZD -1.484m in August versus expectation of NZD -930m. That’s also the largest monthly deficit on record. Exports rose 9.9% yoy to NZD 4.1B. However, imports jumped sharply by 14% yoy to NZD 5.5B, the third highest total on record. It’s also the fourth straight month of imports above NZD 5B.

US Trade Representative Robert Lighthizer complained that “Canada is not making concessions in areas where we think they’re essential”. And, there was “some distance” between the two sides on NAFTA negotiations. Lighthizer added that “We’re going to go ahead with Mexico … If Canada comes along now, that would be the best. If Canada comes along later, then that’s what will happen.” Lighthizer also noted “we’re sort of running out of time,” referring to the US-imposed deadline of October 1.

Canadian Foreign Minister Chrystia Freeland’s spokesman Adam Austen reiterated that “Our focus is the substance, not timelines. We will continue to negotiate with a view to getting a deal that is in Canada’s national interest.”

FOMC preview: Rate hike for sure, focus on new projections

Fed is widely expected to lift federal funds rate by 25bps to 2.00-2.25% today, without a doubt. The voting will be a point to note to seen how impatient the doves were. But it’s more likely to be unanimous than not at this stage. Also, there are expectations of a slight change in the language. That is, “the stance of monetary policy remains accommodative” could be changed to “somewhat accommodative” or even dropped. But this won’t trigger much market reactions, changed or not.

The major focuses will be on the new economic projections. Firstly, 2021 figures will be released. Based on June’s projections, medium projected appropriate federal funds rate will be at 3.4% by the end of 2020. We’d be eager to know if Fed policy makers expect to stop there through 2021, or they would lean towards more tightening ahead.

Secondly, while all the figures, inflation, growth, unemployment, policy path matter, we believe the key is on the 2.9% estimated longer run rate. From the communications of Fed officials, the general consensus is for Fed to raise interest rate to “neutral” and see how it goes from there. A raise in the estimated longer run rate will be tied to a perceived higher neutral rate. And that would be, Fed’s rate hike cycle would likely be prolonged further. To us, this is the single most important figure that moves markets.

Here are some suggested readings on FOMC:

Also in the calendar

AUD/USD rebounds notably today but stays below 0.7303 temporary top. Intraday bias remains neutral first. On the upside, break of 0.7303 will extend the corrective rebound form 0.7804. But in such case, upside should be limited below 0.7361 resistance to complete the correction and bring down trend resumption. On the downside, below 0.7228 will turn bias back to the downside for 0.7143 first. Break there will likely resume larger fall from 0.8135 through 0.7084 low. However, sustained break of 0.7361 will carry larger bullish implication. 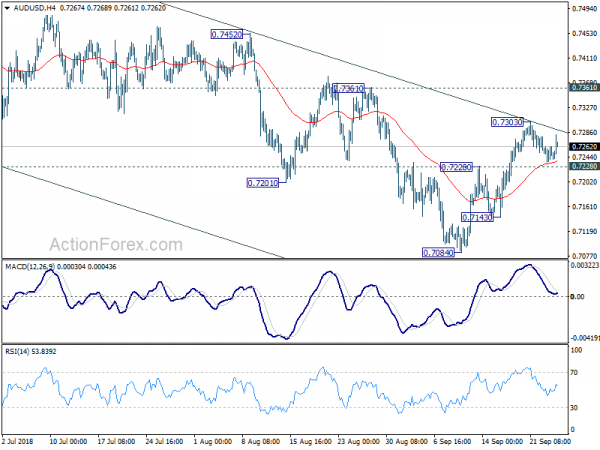 In the bigger picture, rebound from 0.6826 (2016 low) is seen as a corrective move that should be completed at 0.8135. Fall from there would extend to have a test on 0.6826. There is prospect of resuming long term down trend from 1.1079 (2011 high). Current downside momentum as seen in weekly MACD support this bearish case. Firm break of 0.6826 will target 0.6008 key support next (2008 low). On the upside, break of 0.7361 resistance, however, argues that a medium term bottom is possibly in place, and stronger rebound could follow. We’ll assess the medium term outlook later if this happens. 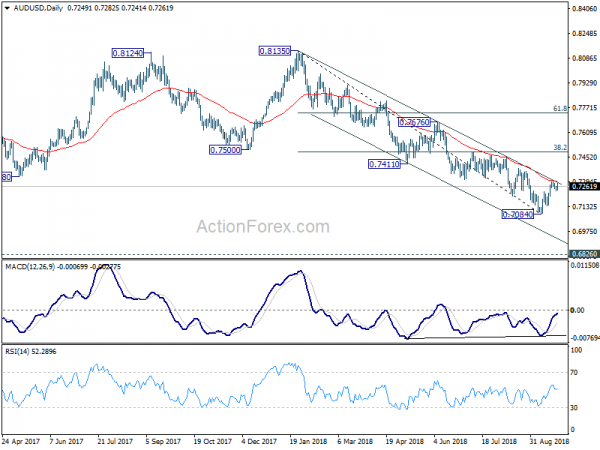