Dollar retreats broadly in early US session as this week’s rally lost some momentum. The greenback might need some help from tomorrow’s non-farm payrolls report if it’s to extend the rise. Still, Australian and New Zealand Dollar are the weakest ones on monetary policy divergence and risk aversion. Sterling is so far the strongest one for today on news that Brexit negotiation is making progress. Also, UK’s new Irish border solution is hailed as a step to the right direction. But so far there is no details on what progress was made. Yen follows as the second strongest, then Euro.

Technically, USD/JPY retreats quite deeply ahead of 114.73 resistance. With 113.51 minor support intact, further rise is still in favor. But break would indicate short term topping and bring lengthier consolidation. Sterling will also be a focus in US session. GBP/USD could have formed a temporary bottom already and stronger recovery might be seen to 1.3022 minor resistance and above. Meanwhile, EUR/GBP’s break of 0.8847 low invalidated our view and could be extending the fall from 0.9097.

Meanwhile, he also added that “the need for extended forward guidance on monetary policy will also diminish, once inflation has reached sufficient progress towards the price stability objective.”

Regarding a hot recent topic of Italy, Rehn said ECB’s Governing Council “primarily looks at the development of the whole euro zone, and firstly from the mid-term price stability target point of view”. And, “monetary policy will be done based on that, not looking at just one member state but the whole euro zone.”

IMF said in a report that while Japanese economy continues to “grow above potential”, downside risks have increased. It urged that “reinvigorated policies are needed to reflate the economy, boost potential growth, and put public debt on a sustainable path.” And, coordinated effort should include (i) a well-specified medium-term fiscal framework; (ii) an ambitious effort toward labor, product market, and corporate reforms; and (iii) a continued accommodative monetary policy accompanied by clear forward guidance.

On monetary policy, IMF hailed that “BoJ’s recent emphasis on making the accommodative stance more sustainable is appropriate, and complements its shift to a more patient approach to reaching the inflation target.” However, IMF suggested that “the relationship between the forward guidance on the long-term interest rate target and the inflation target could be clarified and the quantitative guidance on JGB purchases could be removed.” Also, it suggested BoJ to publish staff baseline forecasts together with underlying policy assumptions to strengthen market communications.

Sudhir Shetty, World Bank chief economist for East Asia and Pacific region, noted that “the main risks to continued robust growth include an escalation in protectionism, heightened financial market turbulence, and their interaction with domestic fiscal and financial vulnerabilities”.

And, he added, “in this context of rising risks, developing EAP economies need to utilize the full range of available macroeconomic, prudential, and structural policies to smooth external shocks and raise potential growth rates.”

GBP/USD’s recovery suggests that a temporary low is formed 1.2921 and intraday bias is turned neutral for consolidations. Upside of recovery should be limited by 1.3115 resistance to bring another decline. We’ll holding on to the view that corrective rise from 1.2661 has completed and larger decline from 1.4376 might be resuming. Below 1.2921 will target 1.2784 support next. Nonetheless, break of 1.3115 will dampen our view and turn focus back to 1.3297 resistance instead. 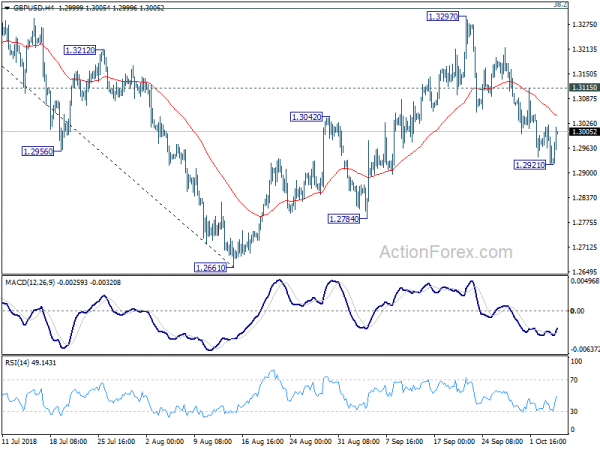 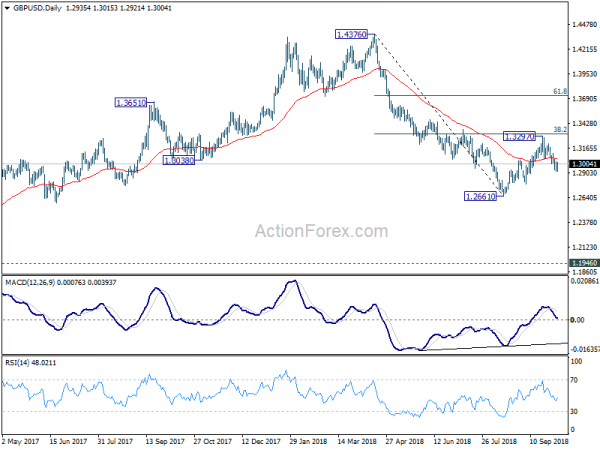