Asian stocks are in full risk-on mode as the week starts. China’s Shanghai SSE leads the way by rising 4.56% at the time of writing, back above 2600 handle at 2666. Some attribute the rebound to words of top Chinese official, including President Xi Jinping who vowed to “unwavering” support for the private sector over the weekend. But it’s equally possible a result of intervention of the “National Team” of state-backed funds. Hong Kong HSI follows and is trading up 2.47%. Nikkei and Singapore Strait Times lag behind and are both up 0.4% only.

The currency markets are rather quiet though, with most pairs stuck in Friday’s range. For the moment, Aussie is the weakest one, getting no lift from China. And Yen follows as the second weakest, the Swiss Franc. Canadian Dollar is the strongest one, as it recovers from Friday’s steep loss. Sterling follows as the second weakest. But after all, the picture the could change drastically as the day goes.

Technically, EUR/USD drew support from 1.1432 and recovered as Moody’s Italy downgrade was well received. It’s also firm so far as Italy’s Di Maio showed some willingness to communicate with EU on budget. More upside is mildly in favor for 1.1621 resistance but this level will likely cap EUR/USD. 0.7088 minor support is a focus today as AUD/USD’s recovery lost steam. Break there will bring retest of 0.7040 low and possibly resume larger down trend.

Italy to response to EU on budget today, Di Maio pledged to stay in Euro

Italian Deputy Prime Minister Luigi Di Maio said the government is going to send EU a formal response on the “serious concerns” over its draft budget today. The response will provide explanations on raising budget deficit to 2.4% of GDP next year. Di Maio hoped that would provide “over a long discussion process … could lead the Commission to share the goals we have set.”

Di Maio, leader of the 5-star movement, reiterated that there is a concern of Italy leave the Euro or the EU, based on the jump in yield spreads. But he emphasized that “there is no Plan B (to leave Europe) but only Plan A which is to change Europe.” And he pledged that “As long as I’m head of this movement and a minister of this government I’ll always guarantee that Italy remains within the euro and in Europe.”

Nonetheless, European Commission is expected to formal reject Italy’s budget tomorrow, and ask for a resubmission. In a letter to Italy last week, EU described Italy’s draft budget as an “obvious significant deviation” of the recommendations adopted by the European Council” and “size of the deviation (a gap of around 1.5% of GDP) are unprecedented”.

Last Friday, Moody’s lowered Italy’s credit rating to Baa3, from Baa2, on notch above junk status. Also rating outlook was assigned as “stable”. The rating cut was generally expected and indeed, markets were calmed by the stable outlook.

Moody’s expressed concern over the budget deficit target of 2.4% of GDP in 2019, which is three times higher than prior target of 0.8%. The shift towards an expansionary fiscal policy would make “Italy vulnerable to future domestic or externally-sourced shocks, in particular to weaker economic growth.” Also, “most of the government’s spending increases are structural in nature, implying that they will be difficult to reverse,”

In addition, Moody’s warned that “the economic plans of the government, while supportive of growth in the near term, do not amount to a coherent program of reforms that will lift Italy’s mediocre growth performance on a sustained basis.”

UK Brexit Minister Dominic Raab said he’s open to the so called transition extension if it could salve the Irish border backstop problem. Raab told BBC TV that “If we need a bridge from the end of the implementation period to the future relationship … I am open minded about using a short extension of the implementation period.” But he also added that it’s possible “as long as it is short, perhaps for a few months” and it “has to solve the backstop issue”.

Raab also said it’s now the “end stage” of the negotiation, and there will be “jitters on all sides of this debate”. But he also emphasized thtat it’s “time to play for the team”.

The week ahead – BoC, ECB and US GDP

Bank of Canada rate decision is a major focus of the week. Despite disappointing CPI as released last week, BoC is widely expected to continue with this week’s rate hike. Indeed, markets are still pricing in over 90% chance of that. However, the path ahead is less certain after the sharp slow down in headline CPI from 2.8% to 2.2% in September. So, BoC’s statement will be crucial in gauging market expectations.

ECB will also meet this week but it’s unlikely to provide anything new. The central bank is a master of forward guidance. The asset purchase program was halved to EUR 15B per month this month. And it’s expected to stop after December. Interests rate are going to stay at present levels at least through summer of 2019. That’s it. Fed will also release Beige book economic report.

On the data front, Eurozone PMIs and German Ifo will catch a lot of attention. US will also release durable goods and trade balance too. But the most market moving one would likely be Friday’s US Q3 GDP.

Intraday bias in AUD/USD remains neutral at this point, with focus on 0.7088 minor support. Break there should indicate completion of the corrective rise from 0.7040 and bring retest of this low. Firm break there will resume recent down trend to 61.8% projection of 0.7676 to 0.7084 from 0.7314 at 0.6948 next. On the upside, above 0.7159 will extend the correction. But upside should be limited well below 0.7314 resistance to bring down trend resumption eventually. 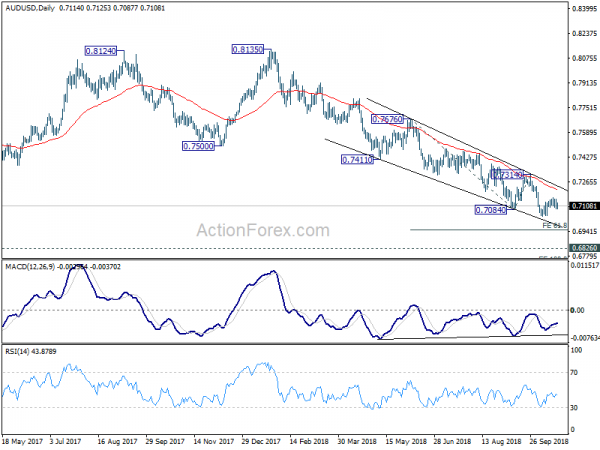