Dollar’s selloff continues as markets enter into US session. It’s clear that Democrats have regained control of the House while Republicans retained control of Senate. The reactions in the financial markets are not too straightforward. Stocks are cheering the results as futures point to triple digit gain in DOW at open. Yet Dollar is under broad based selling pressure even though weakness is relatively limited so far. We’d view the slight decline is US treasury yields as the link between them. 10-year yield is currently down -0.12 at 3.203. One explanation is that it’s hard for Trump’s administration to push through aggressive fiscal stimulus, thus reduce the risks of worsening debt. Hence, lower yields are welcomed by stocks but pressure the greenback. Nevertheless, for such a big event, it takes a bit more time to see which sides the investors would take.

Staying in the currency markets, Yen is the second weakest ones on return of risk appetite. Sterling is the third weakest as this week’s rally lost momentum, on lack of progress of any kind in Brexit negotiation. Australian Dollar is the strongest one, followed by New Zealand Dollar. The latter was boosted by strong job data which raise the chance of RBNZ turning less dovish in the upcoming rate decision. Swiss Franc is the third strongest.

Technically, there are a couple of developments to watch in US session. Firstly, break of 0.7314 key resistance in AUD/USD will be would confirm medium term bullish reversal. EUR/AUD is pressing 1.5742 support now and firm break will resume recent decline from 1.6357. EUR/JPY will likely have a take on 130.20 resistance and break there will indicate near term reversal too.

Here are some comments from EU officials on US mid-term elections. European Commissioner for Economic and Financial Affairs Pierre Moscovici, “The Democrats won the House of Representatives for the first time in eight years, despite a mighty Republican Gerrymandering. Donald Trump is right: “Tremendous success Tonight”

European Commission First Vice President Frans Timmermans, “Inspired by voters in the US who chose hope over fear, civility over rudeness, inclusion over racism, equality over discrimination. They stood up for their values. And so will we.”

German Foreign Minister Heiko Maas tweeted, “It would be a misconception to now bet on course corrections from Donald #Trump. It remains the case: The US remains our most important partner outside Europe. To maintain this partnership, we need to re-measure and realign our relationship with the US.” Also, “More diverse, younger, more feminine-these are the winners #Midterms2018 of the, especially among the democrats. A good part of the electorate has thus confirmed the pioneering role that the country still plays, and hopefully in the future, in favour of diversity and freedoms.”

Irish PM Varadkar hints at no Brexit deal within November

Irish Prime Minister Leo Varadkar said today that “with every day that passes, the possibility of having a special summit in November becomes less likely.” He referred to the extra EU summit for Brexit and hinted that it’s unlikely to reach a deal that soon. Though, Varadkar also noted “we do have one scheduled for the 13th, 14th of December, so not getting it done in November doesn’t mean we can’t get it done in the first two weeks of December. But I think beyond that you’re into the New Year, which I think wouldn’t be a good thing.”

Separately, it’s reported that unnamed EU officials said breakthrough is needed within days if there would be another EU summit on November 17-18. For now, there is no decisive progress yet. European Council President Donald Tusk said he talked to UK Prime Minister Theresa May this morning on Brexit talks. But then? Nothing new, nothing more.

SNB Vice Chairman Fritz Zurbruegg said in a Schaffhauser Nachrichten newspaper interview that when EUR/CHF was at 1.2, there came the ” the impression that everything is solved and the pressure is gone – the franc is no longer a safe haven”. However, then, “you can see that the franc reacts very quickly as long as there are uncertainties.” That showed the “exchange rate situation is still very fragile”. Therefore, SNB policymakers are “convinced we have to continue with our current monetary policy.”

Also, he noted the central bank is not considering to reduce its balance sheet yet. He said “there are risks that we have accepted to fight against the over-valuation of the franc, and we can live with that. And, “the size of our balance sheet doesn’t limit our ability to act and we have shown that we are still ready to intervene in the currency markets if necessary.” He added “that’s why there is no talk at present about reducing this portfolio.”

The set of strong data came in just a day ahead of RBNZ rate decision. RBNZ is widely expected to keep OCR unchanged at 1.75%, without a doubt. The tone of the accompanying statement is the key. RBNZ Governor Adrian Orr has sounded rather dovish in his recent comments, even being open for a cut as next move. The upbeat data will likely be reflected in the communications and thus, at least, remove some bets on RBNZ cut. 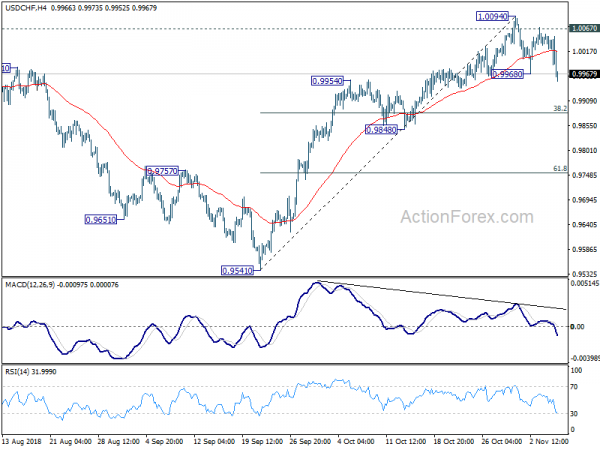 In the bigger picture, the pullback from 1.0067 has completed at 0.9541 already. And rise from 0.9186 is likely resuming. Firm break of 1.0067 will pave the way to retest 1.0342 key resistance. We’d be cautious on strong resistance from there to limit upside to bring another medium term fall to extend long term range trading. However, firm break of 0.9848 near term support will dampen this view and bring deeper decline back to 0.9541 support and possibly below. 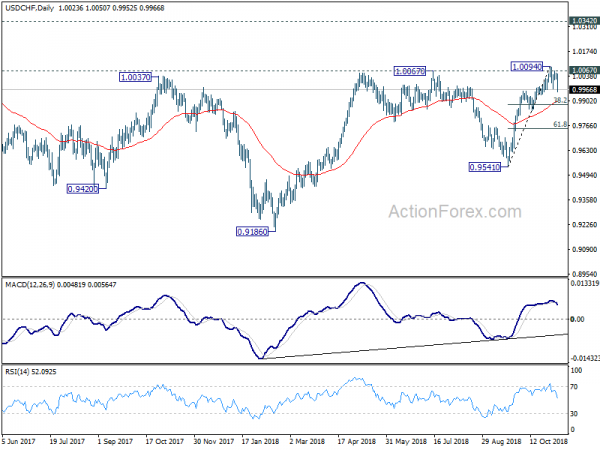 NZDUSD Looks For More Gains But Path Could Be Challenging