Yen and Sterling are the two strongest ones today, but what they’re doing are very different. Yen is extending this week’s rebound. But Sterling is paring back Brexit triggered losses. Meanwhile, commodity currencies turned generally weaker as they’re paring some of recent gains. Overall, after a rather volatile week, traders are readjusting their positions. Trade could be rather subdued before weekly close, barring any more surprises.

Technically, most pairs and crosses are staying in familiar range without any change in outlook. Even GBP/USD is holding above 1.2692 minor support, not to mention 1.2661 low. EUR/USD, USD/CHF, USD/CAD and AUD/USD are staying in consolidations. The main question is whether USD/JPY would finally take out 112.94 support to confirm near term reversal.

UK Prime Minister Theresa May’s spokesman said today that there is “strong support from the business community in recent days” for her highly criticized Brexit draft agreement. Meanwhile, May is expected to appoint another Brexit minister, rather than getting rid of the department. But at the same time, it’s also reported that May will face a no-confidence vote as soon as next Tuesday as Conservatives gather 48 written requests.

And he predicts that the agreement will be rejected by the House of Commons. Then, the government will have to come up with an alternative. And, May “will have to go back to renegotiate”.

European Commission Vice-President Valdis Dombrovskis said in an interview with Il Sole 24 Ore that Italy’s 2019 draft budget plan “significantly” deviates from the country’s commitment to the EU. The resubmitted plan kept the highly criticized budget deficit target at 2.4% of GDP and growth forecasts unchanged at 1.5%. Dombrovskis said that is “openly” challenging the budget rules agreed by all Eurozone countries. Also, he said the plan is “counterproductive” as it triggers investor concerns and would push bond yields higher. Dombrovskis also warned that if Italy no longer comply with the Stability Pact, opening a procedure of penalty “would be justified”.

ECB President Mario Draghi said recent slowdown has raised questions on the strength of Eurozone growth outlook, and whether the the ongoing convergence of inflation towards target will be sustained. Back in October, Draghi said policymakers have “confirmed our confidence” in the outlook. And, inflation convergence could be maintained even after “gradual” winding-down of net asset purchase.

However, the Governing Council also noted “uncertainties surrounding the medium-term outlook have increased.” The council will be “better placed to make a full assessment of the risks to growth and inflation” with the upcoming projections in December meeting.

EU Malmstrom urged China to work on WTO reform, after winning a lot from it

EU Trade Commissioner Cecilia Malmstrom urged China to cooperate on WTO reform in a press conference in Paris today. She said “China has won a lot from the WTO system”. And the EU calls on China to “show leadership and to engage with us to reform and to update the system, to create a level playing field.” She warned that “otherwise the U.S. will create a level playing field outside the system”.

Malmstrom also noted that the WTO’s disputes system was on a slippery slope and “one false step here could quickly lead to collapse of the whole rules-based system.” She added “Without it, it would be anarchy, there would be no order, and we would all be losers. And the poorest countries would be the biggest losers. And we would lose a system that has been used to ensure stability for generations.”

US Commerce Secretary Wilbur Ross said in an interview that all the exchanges with China right now are just “preparatory”. And the “big-event” is the meeting between Trump and Xi at the G-20 in Argentina on Nov 30/Dec 1. He added both leaders will certainly not get into “intimate details”. And, it’s going to be “big picture”. If things go well, the meeting will “set the framework for going forward”.

However, Ross also noted that the US is still planning, on Jan 1, to raise tariffs on USD 200B in Chinese imports from 10% to 25%. And “We certainly won’t have a full formal deal by January. Impossible.”

Separately, it’s reported that the document China sent to the US this week included 142 items regarding US requests on trade. The items are divided into three categories: issues for further negotiation, issues China is already working on, and issues that are non-negotiable. It’s believed that some items on the non-negotiable lists were unacceptable to Trump, while the US is skeptical on others due to China’s history of failing promises.

New Zealand BusinessNZ Performance of Manufacturing Index rose 1.6 to 53.3 in October, indicating faster expansion rate. That’s also the highest level since May. BusinessNZ noted “the October result was a welcome change from where the survey has sat for the previous four months.” And, while “the improvement in the PMI is not large, but we see it as important to the broader economic narrative”.

Looking at the details, the key sub-indicators of production (52.8) and new orders (56.7) both improved with their highest results since May and April respectively. Also, after dipping into contraction during various times in 2018, employment (52.4) improved for a second consecutive month. The proportion of positive comments (58.3%) also increased, with demand for products from offshore customers noted throughout.

Intraday bias in USD/JPY remains neutral with focus on 112.94 minor support. Break there will confirm completion of rebound from 111.37. And, in that case, consolidation from 114.54 would start the third leg. Intraday bias will be turned back to the downside for 111.37 support. On the upside, in case of another rally, due to loss of upside momentum, in case of another rise, upside should be limited by 114.54/73 zone to bring reversal. 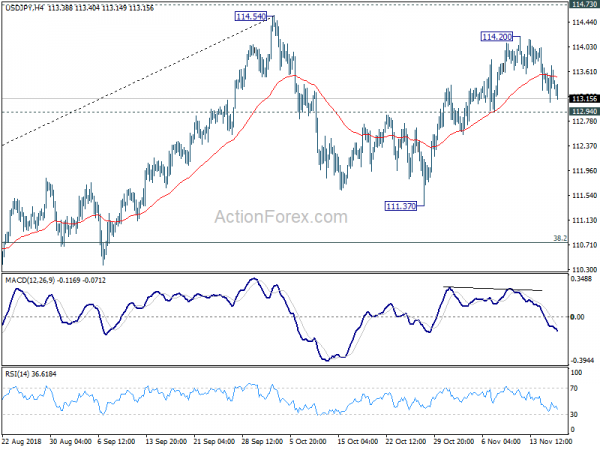 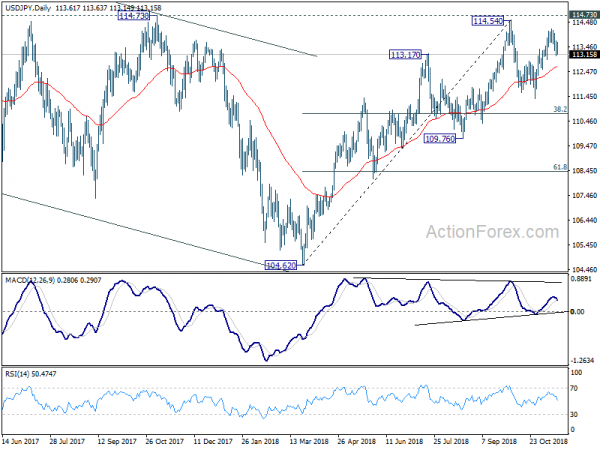