Sterling is generally steady today and gyrates in tight range. UK events are the major focuses with BoE Super Thursday featured. UK Prime Minister Theresa May will also visit Brussels to seek alternative arrangements on Irish border backstop. For now, the recovery in the Pound is rather weak. Real strength is indeed seen in Dollar and Yen. Staying in the currency markets, New Zealand Dollar is the weakest one for today, suffering heavy selling after job data miss. Australian Dollar follows after another batch of weak economic data too.

It’s another BoE Super Thursday today with rate decision as well as quarterly inflation report. BoE is widely expected to keep Bank rate unchanged at 0.75%. The asset purchase target will also be held at GBP 435B. The decisions are very likely to be unanimous.

BoE might revise down both GDP and inflation forecasts. But it should be emphasized that such forecasts are based on scenario of a smooth Brexit. Hence, reactions to any revision to the forecasts could be temporary as the biggest question of Brexit won’t be answered by these figures.

And, as BoE noted repeatedly, “The broader economic outlook will continue to depend significantly on the nature of EU withdrawal, in particular: the form of new trading arrangements between the European Union and the United Kingdom; whether the transition to them is abrupt or smooth; and how households, businesses and financial markets respond.”

Also, “The appropriate path of monetary policy will depend on the balance of the effects on demand, supply and the exchange rate. The monetary policy response to Brexit, whatever form it takes, will not be automatic and could be in either direction.”

We’d expect BoE to reiterate such messages in today’s statement.

UK Prime Minister Theresa May is travelling to Brussels to meet EU leaders to convince them to tweak the Irish backstop arrangement. And as the March 29 formal Brexit date is approaching, May is expected to ask European Commission President Jean-Claude Juncker, European Council President Donald Tusk and the European parliament’s Antonio Tajani to work “urgently”.

According to her office, May is expected to tell the parliament that the “The government now wants urgently to work with the EU to secure such changes … We must show determination and do what it takes to now get the deal over the line.” While the expectation on the meeting is low, May would describe today’s meeting as “part of a process leading to the government bringing back” a new vote on a Brexit agreement as soon as possible.

Fed Powell: It’s important to earn and deserve trust that Fed is non-political

Speaking at a town hall to a group of educators, Fed Chair Jerome Powell repeated the assessment that the US economy is “now in a good place”. While there were some “big events” like Brexit, “the system has been strong”. He also emphasized that the essence of his job is to “earn and deserve trust” of American people to Fed that, it’s “working on their behalf in a non-political way” to support the economy.

Looking forward, Powell said income inequality and sluggish productivity are the biggest challenges of the next decade. He noted “We want prosperity to be widely shared. We need policies to make that happen.” And, “There are policies that we need to do that everyone should be able to agree on that will change mobility, improve people’s chances and enable people to better take part in the workforce of the future.”

Separately, Fed Governor Randal Quarles warned that “right now China is a downdraft as we think about what the potential impact for that is on our economy.” Though, the U.S. outlook “is still very solid” given the labor market in particular.

NZD/USD extends this week’s sharp decline after the release and is heading to 0.6551 support next.

Australia AiG performance of construction index recovered to 43.1 in January. NAB business confidence dropped to 1 in Q4. Japan leading indicator dropped to 97.9 in December. BoE rate decision and ECB monthly bulletin will be the main feature in European session. Germany will release industrial production and Swiss will release foreign currency reserves. Later in the day, US will release jobless claims.

GBP/USD’s decline from 1.3217 is still in progress and intraday bias stays on the downside for 1.2814 resistance turned support. As noted before, rebound from 1.2391 has completed at 1.3217, after rejection by 1.3174 key resistance. Firm break of 1.2814 will bring retest of 1.2391 low. On the upside, above 1.2997 minor resistance will turn intraday bias neutral first. But break of 1.3217 resistance is needed to confirm resumption of the rebound. Otherwise, risk will now stay on the downside in case of recovery. 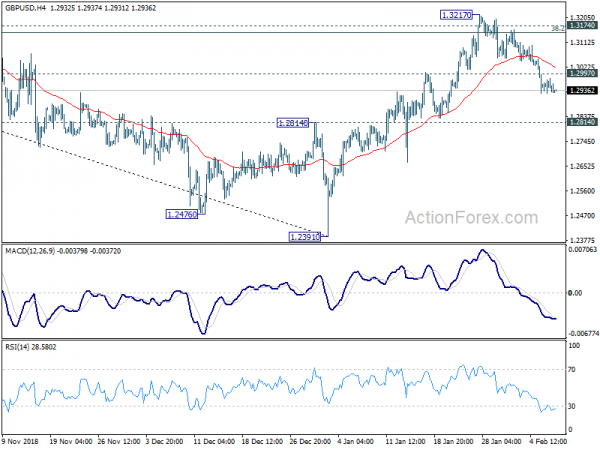 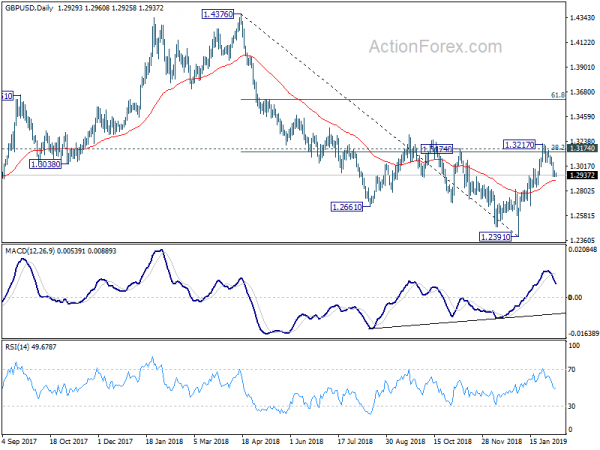