Australian and New Zealand Dollar are the strongest ones for today so far as the forex markets seem to be cheering positive developments in US-China trade negotiations. The idea of 60-day extension to trade truce is certainly welcomed given the complexity in the deal, in particular enforcement. Data from Japan and Germany also showed both countries avoided technical recession in H2 2018. But such positive sentiment is actually not reflected in the stock markets. Though, for now, Yen is the weakest one for today, followed by Dollar.

Over the week, commodity currencies remain the strongest ones, led by New Zealand Dollar. Dollar received some blessing from stronger than expected CPI overnight and it’s trading down only against NZD, AUD and CAD. The greenback will look into retail sales and PPI today for some more strength. Yen is the worst performing one, followed by Swiss Franc. Sterling is not too far away and it’s awaiting Brexit debate in the Commons.

Technically, USD/JPY’s stronger than expected rise now puts 114.20/54 resistance into focus. EUR/USD breached 1.1257 overnight but quickly recovered. Similarly, USD/CHF breached 1.0092 resistance but retreated quickly. The greenback is still in favor to rise against the two. GBP/USD is eyeing 1.2832 temporary low. Break there will likely give Dollar a hand.

High level US-China trade negotiations started in the Diaoyutai state guest house in Beijing today, involving US Treasury Secretary Steven Mnuchin and Trade Representative Robert Lighthizer, and Chinese Vice Premier Liu He. Ahead of that, Mnuchin said he’s “looking forward to discussions today”. There was no elaborate and so far, there is no news leaked regarding the talks.

Trump indicated earlier this week that he’s willing to let the March 1 trade truce deadline slide a little bit. Trump further added that the talks are “going along very well” and the Chinese are “showing us tremendous respect.” Bloomberg reported that Trump is indeed considering to extend the deadline by 60 days, after rejecting the initial request by China of 90 days extension. But the rumor is not confirmed.

China trade balance: Import from US plunged -41%, from EU rose…

January trade data from China showed a better picture. Exports grew 9.1% yoy versus expectation of -3.3% yoy. Import dropped only -1.5% yoy versus expectation of -10.2% yoy. Trade surplus narrowed to USD 39.2B, above expectation of USD 32.0B. However, it should be noted that the trade data for the first two months of the year are generally distorted by Lunar New Year holidays. Thus, while the data are positive, it’s premature to declare that the slow down in China has bottomed. Nevertheless, it’s worth noting that exports to the US since tariff war began were not so much affected. But import from the US plunged, quite notably in Jan by -41%.

Looking at the details, positive contributions mainly came from domestic demand. Development of foreign trade did not make a positive contribution to growth in the fourth quarter. According to provisional calculations, exports and imports of goods and services increased nearly at the same rate in the quarter-on-quarter comparison.

UK RICS house price balanced dropped to -22 in January, below expectation of -20. RBIC noted that activity measures for both buyers and sellers continue to slip. Also, price balance weakens at the national level, led by London and the South East. And, as sales drop, the lettings market is faring better with demand rising.

Simon Rubinsohn, RICS chief economist, warned that “resolution of the Brexit negotiations is widely seen as critical to encouraging potential buyers back into the market, although whether that will be sufficient in London and parts of the South East where affordability remains stretched and the tax changes are most penal remains to be seen.”

Japan GDP grew 0.3% qoq in Q3, rebounding from Q3’s -0.6% qoq contraction. The good news is that Japan avoided a technical recession of two consecutive quarters of contraction. But growth was disappointing and missed expectation of 0.4% qoq. GDP deflator dropped -0.3% yoy, slightly better than expectation of -0.4% yoy.

Japanese Economy Minister Toshimitsu Motegi said in a statement that “the economy is in gradual recovery as growth is led by private demand”. However, “China-bound exports of information-related materials have weakened as the Chinese economy slowed”. He added that the government needs to “monitor uncertainty over global economic outlook including Chinese economy as well as fluctuations in financial markets.”

Eurozone GDP and employment will be the main feature in European session. Later in the data, US data will take center stage. Retail sales, PPI, jobless claims and business inventories will be released. Canada will also release manufacturing sales and new housing price index. 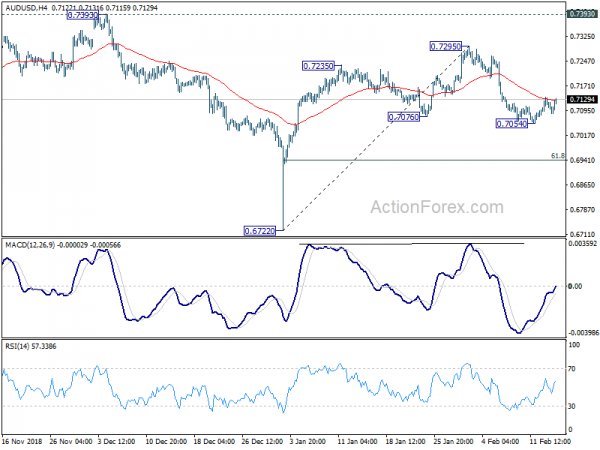 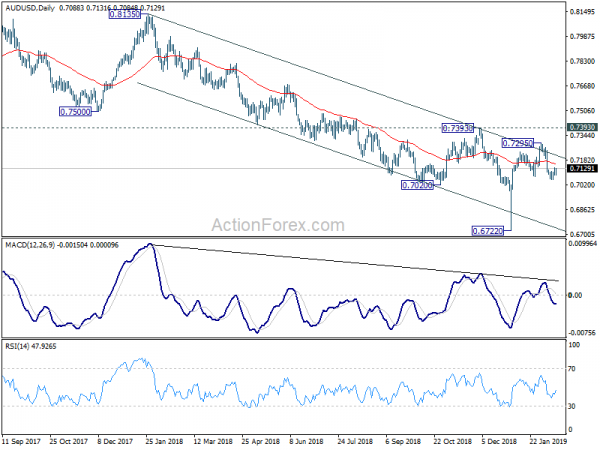