Dollar regains some ground in early US session after stronger than expected Q4 GDP report. But at the time of writing, it’s still trailing behind Euro and Swiss Franc. The common currency is boosted up by strong rally in German 10-year yield, which is up 0.028 at 0.178. Swiss Franc, on the other hand, strengthens after Trump-Kim summit in Vietnam collapsed without an agreement, not even a joint statement. Meanwhile, commodity currencies, including Canadian, Australian and New Zealand Dollar are the weakest.

The immediate focus will now be on whether US treasury yield will follow German yield and extends yesterday’s strong rally. In particular, US 10 year yield might set to take on 2.7 handle again, and a firm break there could push Dollar further higher, and even reverse against Euro. Technically, 111.23 resistance in USD/JPY is now an immediate focus. Firm break there will indicate medium term strength for 114.54 key resistance. EUR/JPY has already taken out 126.30 rather decisively. It’s now likely heading to 129.25 resistance next.

US GDP growth slowed to 2.6% annualized in Q4, down from 3.4% but beat expectation of 2.5%. GDP price index rose 1.8%, beat expectation of 1.7%. The increase in real GDP in the fourth quarter reflected positive contributions from personal consumption expenditures (PCE), nonresidential fixed investment, exports, private inventory investment, and federal government spending. Those were partly offset by negative contributions from residential fixed investment, and state and local government spending.

Trump-Kim summit collapsed, it’s all about the sanctions

Trump in a press conference that he walked away from the summit with North Korean leader Kim Jong-un. But he emphasized that “it was a friendly walk”. The meeting in Vietnam was cut short and ended without an agreement and not even a joint statement.

Trump said “it was all about the sanctions”. He added “basically they wanted the sanctions lifted in their entirety, and we couldn’t do that”. On the other hand, Trump said Kim offered to dismantle North Korea’s main nuclear facility at Yongbyon, but “it wasn’t enough” to the US.

Trump also added that he could’ve signed an agreement today but it wasn’t the right time. He emphasized he’d “rather do it right”.

Swiss GDP grew 0.2% qoq in Q4, rebounded from Q3’s -0.3% qoq contraction, but missed expectation of 0.4% qoq. SECO noted that “as in other European countries, this confirms a slowdown of the economy compared to the first half of the year.”

Looking at the details, manufacturing grew 1.5%, benefited from the strong international demand for Swiss products: exports of goods**(+5.6%) grew substantially. Development in the service industry varied and remained below the historical average, curbed by declining exports of services (−2.6 %) and a final domestic demand which remains sluggish (−0.0%). Consumption expenditures of private households (+0.3%) saw a moderate rise.

Swiss KOF dropped to 92.4, deteriorating sentiment extended from manufacturing to others

KOF economic Barometer dropped to 92.4 in February, down from 96.2 and missed expectation of 96.0. KOF noted that recent downward tendency ” continued unabated”, and the Swiss economy can expect to experience a “weak phase” in the coming months. And, the marked decline is predominantly due to negative impulses from the manufacturing industry; but the deteriorating sentiment has meanwhile also extended to the other components of this barometer.

BoJ Suzuki: Absolutely no need to ramp up monetary easing

BoJ board member Hitoshi Suzuki said today that there is “absolutely no need” to ramp up monetary easing. He added, “if the momentum for hitting the price target is lost, the BOJ will consider taking appropriate action. But many board members, including myself, believe the momentum is sustained.”

Nevertheless, Suzuki noted it’s the current massive stimulus program is still needed. He said “there’s a risk inflation won’t accelerate much for a prolonged period, as companies remain cautious of raising wages and households are sensitive to price rises.

However, analyst Zhang Liqun tried to talk down the deterioration in the statement. He noted that the decline in PMI was mainly due to Lunar New Year factor. He pointed to the significant decline in the production, the purchase volume, and the raw material inventory as indications.

ANZ business confidence dropped to -30.9, RBNZ to cut in November

ANZ also noted that “Clearly the economy is stretched at the moment, but it does appear that momentum has waned markedly over the last six months.” And it expects RBNZ to become “less certain that core inflation will continue rising towards the midpoint of the target band”. ANZ forecasts a cut in OCR in November. 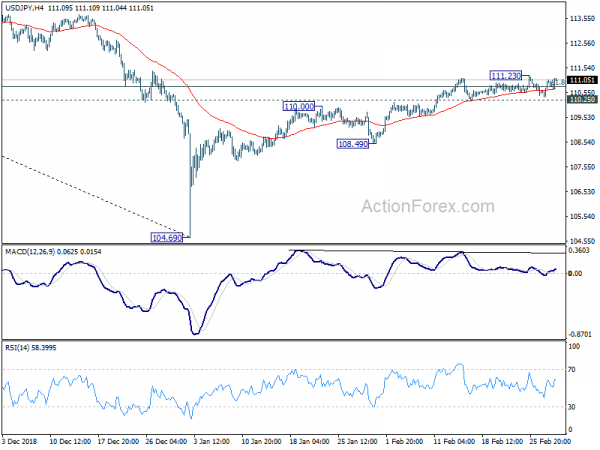 In the bigger picture, while the rebound from 104.69 was stronger than expected, it’s struggle to get rid of 55 day EMA completely. Outlook is turned mixed first. On the downside, break of 108.49 support will revive that case that such rebound was a correction. And, larger down trend is still in progress for another low below 104.62. But sustained trading above 55 day EMA will turn focus to 114.54. Decisive break there will confirmation completion of the decline from 118.65 (2016 high). 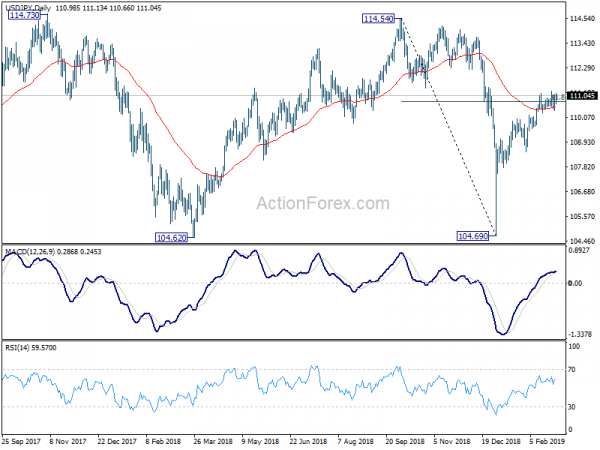 Are Global Stocks Heading For A Bear Market?