Dollar and Euro are trading as the two weakest ones today as pressured by renewed threats of escalation in global trade war. While trade talks with China continue to drag on, US is preparing to start another battle targeting EU. Meanwhile, Sterling is trading generally firm, but bounded in range, as markets some concrete developments on Brexit. Yen follows as the second strongest with mixed stock markets.

Technically, EUR/USD has yet to break through 1.1273 minor resistance decisively. Thus, near term outlook stays bearish for another fall through 1.1176 low. But then, firm break of 1.1273 will indicate short term bottoming and bring stronger rebound back to 1.1448 resistance. USD/JPY is also holding above 111.18 minor support, which will remain a focus today.

The US is set to escalate global trade war by considering to impose tariffs on a range of European Union products, ranging from large commercial aircraft and parts to dairy products and wine, from helicopters to some motorcycles.

In a statement published yesterday, US Trade Representative said WTO repeated found that EU subsidies to Airbus have “caused adverse effects” to the US, with harm in USD 11B in trade each year. USTR has begun Section 301 process to identify EU products to tariff, until EU removes Airbus subsidies. A preliminary list of products are identified for public comment.

USTR Robert Lighthizer said: “Our ultimate goal is to reach an agreement with the EU to end all WTO-inconsistent subsidies to large civil aircraft.  When the EU ends these harmful subsidies, the additional U.S. duties imposed in response can be lifted.”

The UK House of Lords finally passed the cross-party bill devised by Labour’s Yvette Cooper and the Conservative Oliver Letwin to block no-deal Brexit, on Monday night. Despite filibustering by some MPs, it’s an historic swift passage which took three sitting days to complete.

Cooper said the bill “helps avoid the worst outcome on Friday”, the April 12 cliff edge. But the prime minister still needs to build consensus around a workable way forward.” Under the new Act, Prime Minister Theresa May is requested to table her Brexit delay plan in form of an amendable motion. The plan to extend Article 50 till June 30 will now be debated in the House on Tuesday.

Meanwhile, May will head to Berlin and Paris today, meeting German Chancellor Angela Merkel and French President Emmanuel Macron, to secure her short Brexit delay plan. There will also be an emergency EU summit in Brussels on Wednesday

Separately, there is no conclusion of cross-party talks between May and Labour leader Jeremy Corbyn. Labour spokesman just said ministerial and shadow ministerial negotiating teams will meet tomorrow to attempt to secure a Brexit compromise.

EU chief negotiator Michel Barnier warned that the bloc would refuse to open trade talks with the UK after a no-deal Brexit unless the backstop issue was addressed. But he’s happy to offer the UK a customs union.

Rating agency Moody’s dramatically downgrades Australia house prices forecasts. Weak household consumption, compounded by low wages growth were among the factors. Even though house prices are expected to bottom in Q3, further credit tightening and changes to negative gearing could extend and deepen the decline.

EUR/AUD’s recovery was rejected by 4 hour 55 EMA again and it weakens mildly. Still, it’s staying in consolidation pattern from 1.5721 and intraday bias remains neutral. Another rise cannot be ruled out. But upside should be limited by 1.6122 resistance to bring fall resumption. On the downside, sustained break of 1.5721 will resume the decline from 1.6765 to 1.5346 key support next. 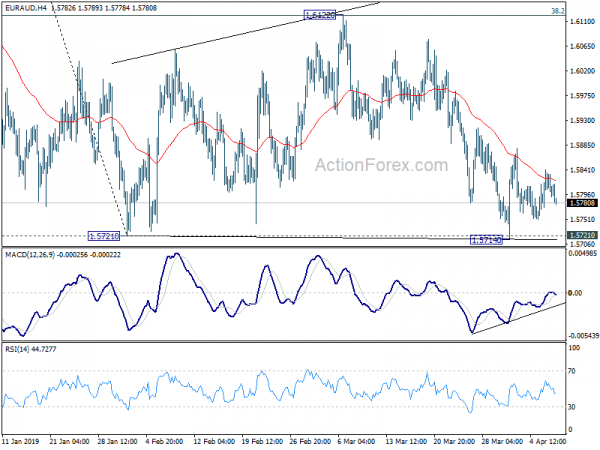 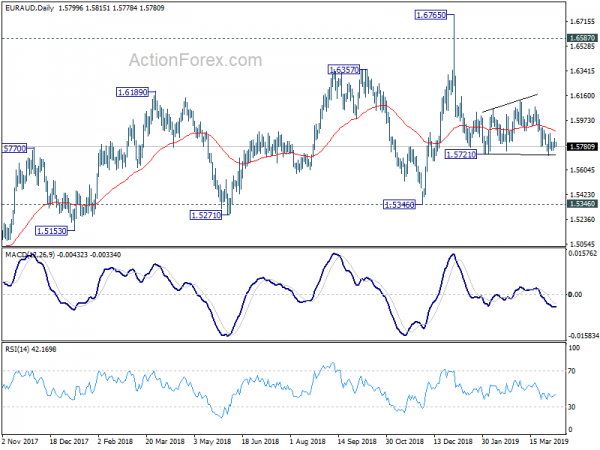