Australian and New Zealand Dollars have very different fortunes today. Aussie was boosted higher by stronger than expected Chinese data. On the other hand, Kiwi dived as weaker than expected CPI raises the chance of RBNZ rate cut at next meeting. In between, Euro is the second strongest so far, followed by Sterling. Dollar is the second weakest, followed by Yen. Focus will turn to more inflation data from UK and Canada today.

Technically, AUD/USD’s choppy rise resumed and edged higher to 0.7205. Further rise is mildly in favor towards 0.7295 resistance. EUR/AUD’s break of 1.5721 support now suggests resumption of fall form 1.6765. USD/JPY edged higher and breached 112.13 key resistance. But there is no follow through buying to push it through this key resistance yet.

Another batch of data from China released today surprised on the upside. GDP growth came in at 6.4% yoy in Q1, unchanged from prior quarter and beat expectation of 6.3% yoy.

Recent data from China continued to paint the picture of stabilization in slowdown, and raised hope that recovery is on the way. That’s an important condition for improvement in global outlook.

CPI has been persistently weak and remained below mid-point of RBNZ’s 1-3% target range for the eight consecutive quarter. Indeed, CPI has only breached 2% level once in Q1 2017 (2.2%) since 2011. Yesterday, RBNZ Governor Adrian Orr noted that “possibilities of first quarter inflation numbers being undershot have already being factored in the RBNZ’s dovish bias”. The downside surprise is giving Orr an even worse picture and solidifies the imminent need for policy easing.

Exports to China, Japan’s largest trading partner, dropped -9.4% yoy, reversing from 5.6% growth in February. Exports to Asia as a whole dropped -5.5% yoy, a fifth straight month of decline. The slump in exports could drag down capital expenditure and private consumption growth . And it raised concerns that the economy contracted again in Q1.

Also from Japan, industrial production was finalized at 0.7% mom in February.

The US Trade Representative issued a statement regarding the meeting of USTR Robert Lighthizer and Japan’s Economic Revitalization Minister Toshimitsu Motegi on April 15-16 in Washington.

In the statement, it’s noted that US and Japan “discussed trade issues involving goods, including agriculture, as well as the need to establish high standards in the area of digital trade”. Also, US raised its “very large trade deficit with Japan – $67.6 billion in goods in 2018.” Both sides agreed to meet again in the “near future to continue these talks”.

Motegi said yesterday that no agreement has been made. But he hoped to reach a “good result” on the talks “at an early stage.” There will be further discussions next week before the US-Japan summit. Meanwhile, discussions regarding exchange rate would be left to finance ministers.

He pointed to experience in the late 1980s, and noted “one of the factors that led to Japan’s asset-inflated bubble was the fact we kept monetary policy easy even as the economy continued to expand”. Hence, “the BOJ must be mindful of the potential risks to the economy and prices, including financial imbalances,”

Regarding monetary policy, Amamiya said “we’re ready to respond if financial problems have a big impact on the economy.”

AUD/USD’s choppy rise from 0.7003 resumed by taking out 0.7192 and reaches as high as 0.7205 so far. Intraday bias is back on the upside for 0.7295 resistance. Upside momentum is relatively weak and structure of the recovery is corrective looking. Thus, upside could be limited by 0.7295 to bring near term reversal. On the downside, break of 0.7139 minor support will turn intraday bias back to the downside for 0.7003/7052 support zone instead. 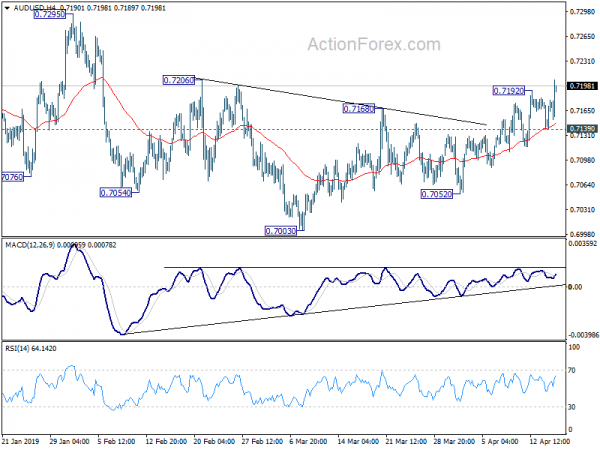 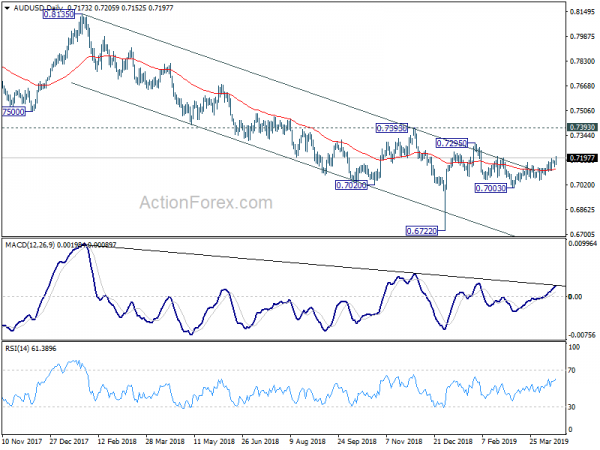 Market Morning Briefing: Pound Has Not Been Able To Rise Sharply From Support Near 1.2950