Worries over Italy’s budget takes center stage today. Italy 10-year yield hit as high as 2.812. On the other hand, German 10-year yield dived to as low as -0.131. US 10-year yield is also dragged down to as low as 2.364 so far. These are clearly signs of risk aversion even though stock market losses are limited for the moment. In the back, poor Chinese data also indicates that slowdown is resuming after a brief seasonal rebound in March. Weaker than expected US retail sales add to the concerns of investors in general.

In the currency markets, Yen and Swiss Franc are back as the strongest ones for today, thanks to falling treasury yields in Germany and US. Dollar is following as third strongly, mainly thanks to weakness elsewhere. Sterling suffers renewed selling in early US session and is now the weakest one. Australian and New Zealand Dollar follow as next weakest.

Technically, EUR/JPY and GBP/JPY resumed recent decline today by taking out 122.48 and 141.20 temporary lows. More decline is expected head. USD/JPY is holding above 109.02 temporary low for now, but could easily be dragged down by other Yen crosses. AUD/USD is extending recent fall with focus on 0.6913 fibonacci projection level. Decisive break there, with downside acceleration, will solidify the case for larger down trend resumption. GBP/USD’s break of 1.2865 support should confirm near term reversal for 1.2391 low again. USD/CAD is staying in range as Canadian CPI was largely stable.

German-Italian yield spread widens sharply again today on fear of expansionary budget again in Italy and renewed risk of showdown with EU. The trigger was Italian Deputy Prime Minister Matteo Salvini’s pledge yesterday, to be prepared to let budget deficit rise above EU limits if it were to boost employment.

Salvini doubled down today and said that “If there are European rules that are starving a continent, these rules must be changed”. On current market reactions to his comments, he said he’s “absolutely not worried”, because “Italians’ right to a job, life and health comes first.”

Economy Minister Peter Altmaier said the growth figures were a “first ray of hope” following two quarters without expansion. However, he warned that ” international trade disputes are still unresolved”. He urged , “we must do everything possible to find acceptable solutions that enable free trade”.

More seriously, retail sales growth slowed to 7.2% yoy, down from 8.7% yoy and missed expectation of 7.2% yoy. That’s also the lowest growth since May 2003. That dents hope of shifting the burden of the economy from exports to domestic demand growth. Unemployment rate, though, dropped to 5.2%.

Westpac also noted that easing bias was delivered by RBA at last week’s meeting, with growth and inflation forecasts lowered to “barely acceptable” levels. More importantly, such forecasts are based on market pricing for a full rate cut for. Westpac maintained that the tensions between strong labor market and weak GDP will be resolved over the next few months. And the case of August RBA cut would become clear.

EUR/JPY’s decline resumed after brief consolidation and reaches as low as 122.08 so far. Intraday bias is back on the downside. Current fall from 127.50 should extend to retest 118.62 low. On the upside, break of 123.61 resistance is needed to indicate short term bottoming. Otherwise, outlook will remain bearish in case of recovery. 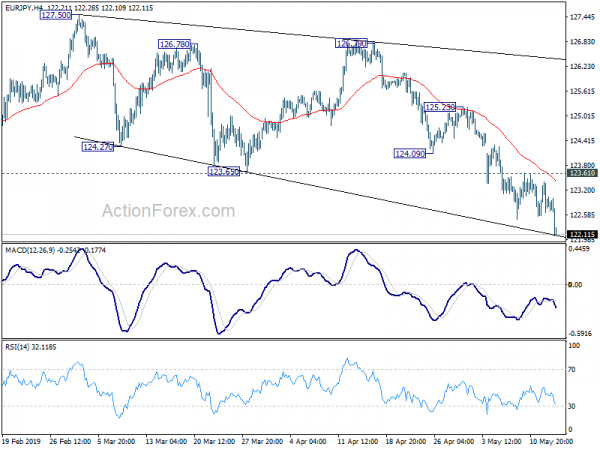 In the bigger picture, current development argues that rebound from 118.62 is merely a correction and has completed at 127.50. EUR/JPY is staying in long term falling channel from 137.49 (2018 high). Decisive break of 118.62 will confirm resumption of this medium term fall and target 109.20 low. For now, this will be the favored case as long as 125.23 resistance holds. 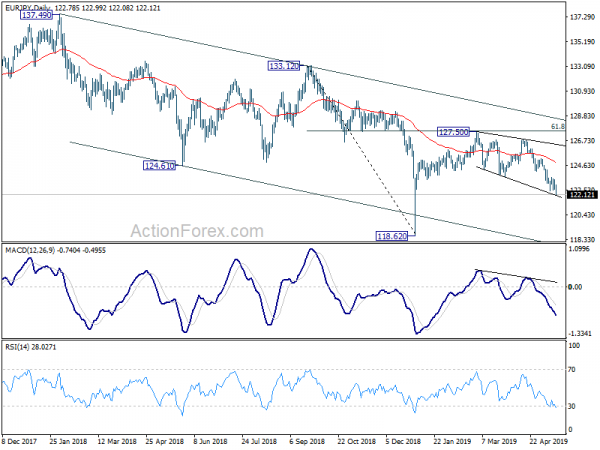