Australian Dollar drops broadly today after RBA minutes confirm that more rate cuts are underway. Additional, worse than expected house price data gives the Aussie more selling pressure. Sterling is not far away as second weakest, ahead of the next round of UK Conservative leadership voting today. For now, Yen is the strongest one following decline in Nikkei as well as weakness in major treasury yields. Euro continues to be very resilient and follows as the second strongest for today. Though, the common currency will face test from German economic sentiment data.

RBA Minutes: Further rate cut is more likely than not

RBA cut cash rate by -25bps to 1.25% at the June 4 meeting. Minutes of the meeting noted “members agreed that it was more likely than not that a further easing in monetary policy would be appropriate in the period ahead.”

Policymakers acknowledged that inflation has been below 2-3% target range for three years and even deteriorated to 1.5% in Q1. Unemployment rate had not declined any further in the last six months despite ongoing job growth. It has eve edged up in the most recent two months. Thus, “a lower level of interest rates would support growth in the economy, thereby reducing unemployment and contributing to inflation rising to a level consistent with the target.”

Also, lower interests could support the economy through lower exchange rate, reduced borrowing rates for businesses, and lower interest payments for households. And give the extent of spare capacity in the economy and the subdued inflationary pressures, there was “a low likelihood of a decline in interest rates resulting in an unexpectedly strong pick-up in inflation.”

Instead, lowest interest rates would ” stimulate activity and thereby improve the resilience of the Australian economy to any future adverse shocks.”

ABS Chief Economist, Bruce Hockman said: “These results are in line with soft housing market indicators, with sales transactions and auction clearance rates lower than one year ago, and days on market trending higher. A continuation of tight credit supply and reduced demand from investors and owner occupiers has contributed to weakness in property prices in all capital cities this quarter.”

Ahead of BoJ’s June 19-20 monetary policy meeting, Governor Haruhiko Kuroda warned the parliament of risks from US-China trade war and China’s economy. And he pledged that the issues will “certainly” be debated.

Kuroda said, “as for recent overseas economic developments, there are strong downside risks regarding the Sino-U.S. trade friction and China’s economy.” And, “we’ll certainly debate such overseas developments” at the upcoming meeting.

He also reiterated that “BOJ will guide monetary policy appropriately taking into account the impact overseas economic changes could have on Japan’s economic outlook and the momentum for achieving our inflation target”.

EU: China tops the list of trade and investment barriers

In a report released yesterday, European Commission said, in 2018, China had the highest stock of recorded barriers, with 37 obstacles hindering EU export and investment opportunities. Russia was a close second with 34 barriers in place. India (25), Indonesia (25) and US (23) followed. On new barriers, Algeria and India topped with five new measures. US and China followed with four new measures each.

Commissioner for Trade Cecilia Malmström said: “In the complex context we have today with a growing number of trade tensions and protectionist measures, the EU must keep defending the interests of its companies in the global markets. Making sure that the existing rules are respected is of utmost importance. Thanks to our successful interventions, 123 barriers hindering EU exports opportunities have been removed since I took office in late 2014. Working on specific problems reported by our companies we manage to deliver economic benefits equivalent in value to those brought by the EU’s trade agreements. Those efforts certainly must continue.”

Eurozone will release trade balance and CPI final in European session. But main focus will likely be on German ZEW economic sentiment. Later in the day, Canada will release manufacturing sales. US will release housing starts and building permits.

AUD/USD drops further to as low as 0683 so far today as decline from 0.7295 is extending. Intraday bias stays the downside for retesting 0.6722 low next. On the upside, above 0.6884 minor resistance will turn intraday bias neutral and bring consolidations. But recovery should be limited well below 0.7022 resistance to bring fall resumption. 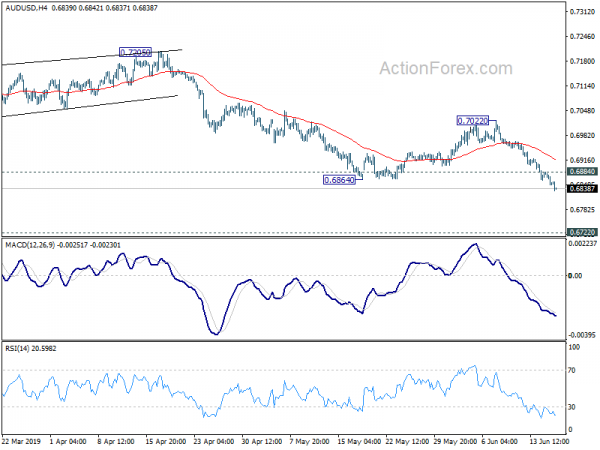 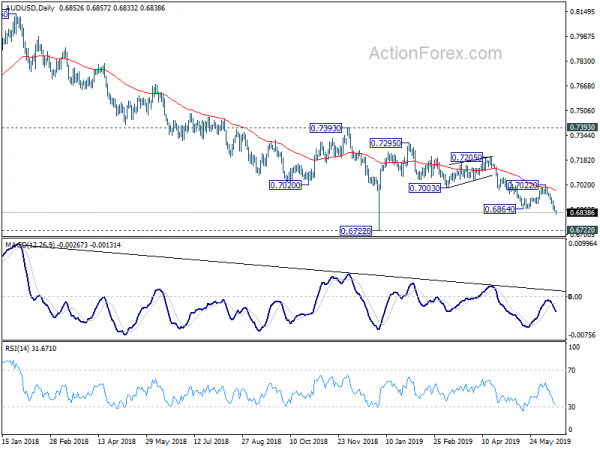