Dollar recovers mildly today as US markets will be back from holiday. But understandably, upside momentum is rather weak so far as the crucial non-farm payroll report is awaited. Overall trading is mixed this week, as some technical level are not firmly take out, even breached. For example, Gold is staying in consolidation below 1439.23, despite the rally attempt earlier. Traders could finally make up their mind after today’s job data. But for now, it seems that traders would still expect a Fed cut in July even if we’ll get some strong data today. Risks for the greenback are skewed to the downside.

Technically, some more upside is mildly in favor in Dollar against European majors. But break of 1.1344 minor resistance in EUR/USD, 1.2645 minor resistance in GBP/USD and 0.9809 minor support in USD/CHF could indicate return of Dollar selloff. Similarly, break of 107.53 minor support in USD/JPY could suggest return of Yen’s rally, and prompt selloff in EUR/JPY and GBP/JPY too. These are the levels to watch today.

US non-farm payroll report will be the major focus today, as it’s a crucial factor to Fed’s rate decision later in the month. For now, fed funds futures are still pricing in 100% chance of a rate cut on July 31, with 30.7% chance of 50bps cut. The pricing suggests that even a set of strong job data today won’t deter Fed’s cut. But a set of weak number would solidifies it. At least, this seems to be what the traders think.

Looking at other job related data, ADP employment rebounded in June and grew 102k. ISM Manufacturing Employment rose from 53.7 to 54.5. ISM Non-Manufacturing Employment dropped from 58.1 to 55.0. Four-week moving average of initial jobless claims dropped rose slightly from 215k to 222k. Conference Board Consumer Confidence dropped from131.3 to 121.5, lowest since September 2017.

As for NFP, markets are expecting 164k growth in June. Unemployment rate is expected to be unchanged at 3.6%. Average hourly earnings are expected to rise 0.3% mom. Dollar could suffer some heavy selloff on downside surprises today. But reactions to upside surprise are relatively uncertain.

An SCMP report in Hong Kong suggested that China’s commitment to buy additional agricultural products, as part of the agreement with US to halt trade war escalation, was not unconditional. Apparently, as Chinese media noted, if US “flip-flops” again in future trade negotiations, the purchase will be stopped again.

Additionally, China would want to see how the ban on tech giant Huawei is lifted, before committing the purchases. Trump has promised to ease supply ban on Huawei and White House could make an announcement on the details soon. For now, it’s believed that Trump’s administration was still debating how to ease the restrictions.

BoJ Amamiya: No plan to issue digital currency in the near future

BoJ Deputy Governor Masayoshi Amamiya said today the central bank has no plan to issue digital currency in the near future. And he disagreed to the idea that  central banks can boost the effectiveness of negative interest rate policies by issuing digital currencies. “To overcome the nominal zero lower bound, central banks would need to eliminate cash,” Amamiya said. “Eliminating cash would make settlement infrastructure inconvenient for the public, so no central bank would do this.”

On the economy, Amamiya still expected to climb to 2% target. But he repeated BOJ wouldn’t hesitate to ease policy further if momentum to hit inflation target is disrupted. While downside risks are strong, he noted many global central bankers share the view that global economy will recover in the second half.

Japan overall household spending rose 4.0% yoy in May, well above expectation of 1.40% yoy. That’s the fastest pace in four years since May 2015. The results argued that pickup in consumption could help offset some weakness in external demand in Q2.

However, spending ahead could be weighed down by sluggish wage growth ahead. Sentiments could also weaken on uncertainty over economic outlook, due to trade war. Additionally, the scheduled sales tax hike could also have negative impacts on spending. For now, Prime Minister Shinzo Abe is holding on to the plan to raise sales tax to 10% this October.

Germany will release factory orders in European session. Swiss will release foreign currency reserve. US NFP will be a major focus. Canada job data will be equally important while Ivey PMI will be featured too. 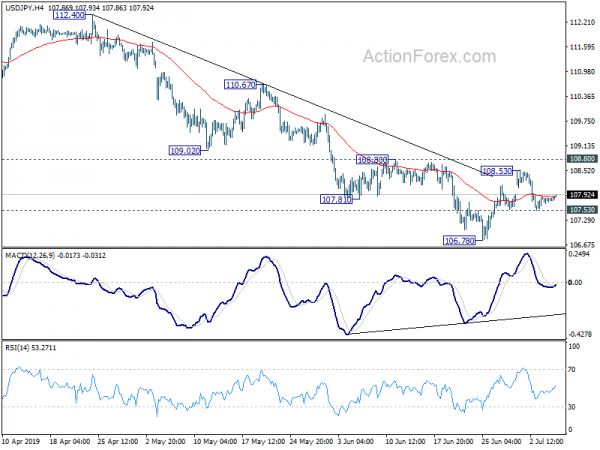 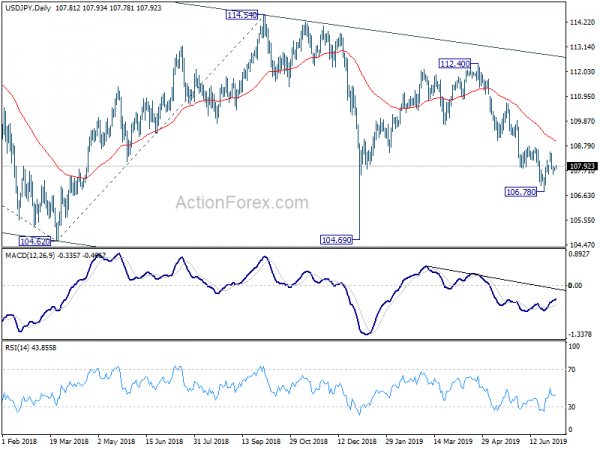