Dollar, Swiss Franc and Yen remain the strongest ones for today. Risk aversion mode was turned on in European session and is carried forward to US session. Investors are turning cautious as expectation for Fed rate cut this month is being adjusted. Fed Chair Jerome Powell didn’t comment on monetary policy today, and is saving his views for more discussion in his testimony. At this point, Australian Dollar remains the weakest one after poor business confidence data. Sterling follows as second weakest, awaiting GDP data tomorrow.

Technically, EUR/GBP’s break of 0.8992 suggests rally resumption towards 0.9101 key resistance. However, as upside momentum is not too strong for the moment. We’d be cautious on topping around there. With general weakness in Sterling, GBP/USD is heading toward 1`.2391 low and sustained break will resume larger down trend. GBP/JPY is also eyeing 135.17 temporary low again as recovery was limited by 4 hour 55 EMA.

WH Kudlow: Powell is safe at the present time

White House National Economic Council Director Larry Kudlow reiterated his view that Fed can “take back” its December rate hike. Also, he urged Fed to look at low inflation data, rather than strong job data in deciding the rate cut. Meanwhile, Kudlow also noted Trump is making “no effort” to remove Fed Chair Jerome Powell. And, “at the present time, yes he is safe”.

Separately, Powell delivered opening remarks at “Stress Testing: A Discussion and Review,” a Boston Fed research conference. But he didn’t talk about monetary policy. Focus will turn to his two-day semiannual Congressional Testimony, which starts tomorrow.

Canada building permits dropped -13.0% mom to CAD 8.2B in May, worse than expectation of -10.0% mom. Permits increased in six provinces and all territories. But they’re not enough to offset the decreased in British Columbia.

Housing starts rose to 246k in June, up fro 197k and beta expectation of 209k. The national trend in housing starts increased primarily due to higher trending row and apartment starts, in urban areas.

EU Dombrovskis: All member economies are set to growth this year and next

European Commission is scheduled to announce new economic forecasts tomorrow. Ahead of that Vice-President Valdis Dombrovskis said “all EU economies are set to grow this year and next,” citing the forecast results. However, he also warned that “we see risks, especially external risks, on the rise”. And resilience of EU economies could be tested if the risks materialized. He also emphasized “it’s high time to do reform while keeping public finances sound.”

Released in European session, Swiss unemployment rate dropped to 2.3% in June, down from 2.4%.

She added: “Businesses and the public desperately need clarity on Britain’s future relationship with the EU. The continued risk of a No Deal Brexit is harming consumer confidence and forcing retailers to spend hundreds of millions of pounds putting in place mitigations – this represents time and resources that would be better spent improving customer experience and prices. It is vital that the next Prime Minister can find a solution that avoids a No Deal Brexit on 31st October, just before the busy Black Friday and Christmas periods.”

Australia NAB Business Conditions improved from 1 to 3 in June, but remain below average. Business Confidence dropped from 7 to 2, largely unwound the bounce from 0 to 7 in May. NAB said “the recent run of results also suggest that the economy is unlikely to record a significant pickup in growth in Q2.” Further, “forward orders also remain below average (and are negative), suggesting a near-term turn around in business activity is unlikely.”

According to Alan Oster, NAB Group Chief Economist, “Business confidence appears to have unwound its spike in May, which we think was driven by a short-term election bounce and increased optimism around a renewed interest rate easing cycle by the RBA. While business conditions increased slightly in the month, they remain well below average after trending lower for over a year now. The decrease in conditions has been relatively broad-based across states and industries – suggesting that there has been sector wide loss of momentum over the past year”.

GBP/USD’s decline extends to as low as 1.2439 so far today. Intraday bias remains on the downside for 1.2391 low. Firm break there will resume larger down trend. On the upside, above 1.2539 minor resistance will turn intraday bias neutral first. But near term outlook will stay bearish as long as 1.2783 resistance holds. 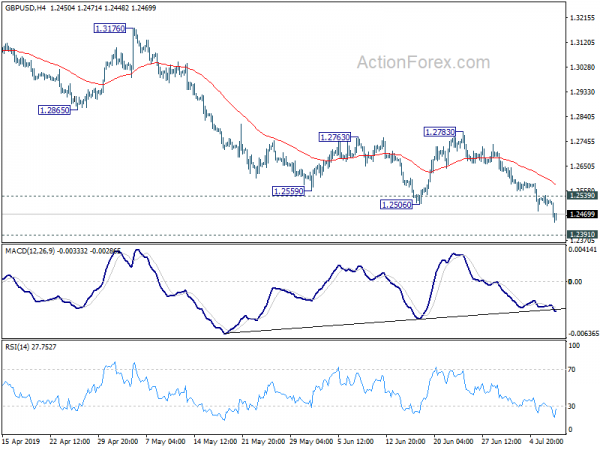 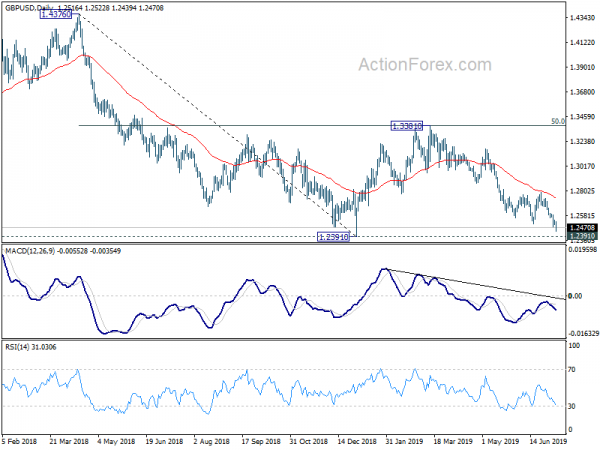 EU Indices Down This Morning | TA Focus On ING Groep

Euro Extends Its Losses In The Morning Session

Aussie Trading On A Weaker Footing This Morning