Dollar drops notably in response to Fed Chair Jerome Powell’s prepared remains for the two day Congressional testimony which starts today. The greenback is currently the weakest one for today, followed by Yen and the Canadian. On the other hand, New Zealand Dollar is the strongest one, followed by Swiss Franc and then Sterling.

Traders seems to be assuming that Powell’s reference that uncertainties continue to weigh on outlook as a nod to July rate cut. Yet, Powell will still need to be more explicit in the Q&A session of the testimony. Currently, markets are still pricing in 100% chance of a Fed rate cut this month. We’d like to point out again that just back in June, nine out of seventeen FOMC participants expected interest rates to stay at 2.25-2.50% or higher within this year. It’s rather hard to imagine these nine policymakers would change their mind for a cut, after Mexican tariffs were averted, US and China agreed to halt trade war escalation, and a solid June NFP report.

BoC is another major focus in US session. It’s widely expected to keep policy rate unchanged at 1.75%. The case for easing faded after recent data continued to show broad-based pick-up in the economy. Also, WTI crude oil has already rebounded notably from last year’s low of 42 and settled between 50/60. Headline inflation also picked up to 2.4% yoy, with core measures averaged at 2.1%. BoC would possibly shift towards a more neutral stance. But for now, due to external risks, there shouldn’t be any case to turn hawkish yet.

Dollar drops notably in response to Fed chair Jerome Powell’s prepared speech for the semi annual Congressional testimony. Most importantly, Powell said since June meeting, “based on incoming data and other developments, it appears that uncertainties around trade tensions and concerns about the strength of the global economy continue to weigh on the U.S. economic outlook. Inflation pressures remain muted.”

However, just based on the prepared remarks, there is no confirmation on a July rate cut. Thus, selloff in Dollar is relatively limited so far. Powell will need to be really straightforward in the Q&A of the testimony.

European Commission Vice President Valdis Dombrovskis said: “The resilience of our economies is being tested by persisting manufacturing weakness stemming from trade tensions and policy uncertainty. On the domestic side, a “no deal” Brexit remains a major source of risk.”

Commissioner Pierre Moscovici urged: “Given the numerous risks to the outlook, we must intensify efforts to further strengthen the resilience of our economies and of the euro area as a whole.”

UK GDP grew 0.3% mom in May, on partial recovery in car production

Rolling three month growth from March to May slowed to 0.3%, down from 0.4% from February to April. It’s also notably below 0.5% qoq in Q1. Services grew 0.3% in the three-month period, production grew 0.3%, while construction was flat.

Commenting on today’s GDP figures, Head of GDP Rob Kent-Smith said: “GDP grew moderately in the latest three months, with IT, communications and retail showing strength. Despite this, there has been a longer-term slowdown in the often-dominant services sector since summer 2018. The economy returned to growth in the month of May, following the fall seen in April. This was mainly due to the partial recovery in car production.”

The National Institute of Economic Social Research (NIER) said UK economy is on course to contract by -0.1% in Q2. However, initial outlook for Q3 is for growth of 0.2%. Thus, UK would likely avoid a technical recession, two consecutive quarters of contraction.

Janine Boshoff, Economist in the Macroeconomic Modelling and Forecasting team, said “Our latest estimate implies that the economy will narrowly avoid a technical recession in the middle quarters of this year. That said, the latest ONS data and recent surveys suggest that the economy has lost considerable momentum since the first quarter. This reflects the impact of Brexit-related uncertainty and slower growth in the global economy outside of the United States. The near-term outlook for the UK economy continues to depend on the outcome of the Brexit negotiations.”.

Australia Westpac Consumer Confidence dropped sharply by -4.1% to 96.5 in July, hitting a two year low. The deterioration came as a surprise as confidence was not supported by recent positive developments, including RBA’s rate cuts and easing US-China trade tensions.

Deepening concerns over Australian economic outlook were the main drivers in decreasing confidence. Expectations in economic conditions for the next 12 months dropped -12.3 to 87.1. That’s the lowest level in four years. For the next 5 years, expectations index dropped -6.7 to 91.6.

After two rate cuts in June and July, Westpac expects RBA to stand pat at next meeting on August 6. Updated economic projections to be released then would give the best guide to how the RBA sees the case for further policy action. Westpac expects a further 25bps cut most likely coinciding with a downgrade to the Bank’s growth and inflation forecasts in November. Though, it said “the timing of this next move remains highly uncertain”.

EUR/USD’s recovery from 1.1193 temporary low extends further in US session. But upside is limited below 1.1268 minor resistance. Intraday bias stays neutral first. On the downside, firm break of 1.1181 support will confirm completion of rebound from 1.1107 at 1.1412. Further fall should then be see to retest 1.1107 low. On the upside, firm break of 1.1268 minor resistance will turn intraday bias back to the upside for 1.1412 instead. 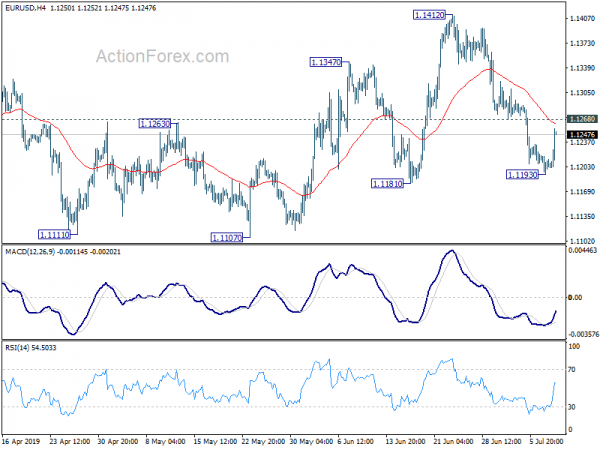 The US Dollar Rallies On Haven Flows

EUR/USD Is Below Monthly S1