While Dollar remains the worst performing one for the week, Euro is overtaking as the weakest one for today. Selloff in crosses, in particular in EUR/CHF, is dragging down the common currency. Much stronger than expected industrial production data was ignored. Instead, it’s clear that ECB is on track for more monetary stimulus, and could probably deliver even ahead of Fed.

Staying in the currency markets, Dollar is so far the weakest one for today, followed by New Zealand Dollar. Swiss Franc and Yen are the strongest ones, also ignoring resilience in stock markets and rebound in treasury yields. Canadian Dollar is the third strongest for now.

WH Navarro: Trade negotiation with China in a quiet period, be patient and don’t listen to garbage

White House trade advisor Peter Navarro said trade negotiation with China is “in a quiet period” and urged people to be “patient with the process”. He also trashed media in US and China as they reported “garbage” regarding trade negotiation. Instead he urged people to only listen to comments from either Trump or Trade Representative Robert Lighthizer.

Navarro said on CNBC Squawk Box that “my advice for investors is to be patient with the process and don’t believe anything you read in either the Chinese or the US press about these negotiations unless it comes from the mouth of either the president or advisor Lighthizer”.

And, “there’s just going to be a lot of garbage coming out of the Wall Street Journal and the People’s Daily and everything in between,” he added, “there were all sorts of stories written and they were designed to shape the negotiations and they didn’t have any insight into them.”

ECB Visco: Will asset hot to adjust policy instruments in the coming weeks

ECB Governing Council member Ignazio Visco said the central bank “will need to adopt further expansionary measures if the euro zone economy does not pick up.” And, “in the coming weeks the ECB will continue to assess how to adjust the instruments at its disposal”. This is in-line with market expectations that ECB is ready ramp up monetary stimulus either on July 25 or later in September.

Being Governor of Bank of Italy too, Visco expected the Italian economy to grow just 0.1% this year, marginally below the government’s 0.2% official forecast. Though, he also expected growth to pickup to just slightly below 1% in 2020 and 2021. He urged the government to adopt “prudent” budget deficit targets for the coming years. But he also welcomed recent fall in Italian yields, after EU averted the Excessive Deficit Procedure on the country.

Eurozone industrial production rose 0.9% mom in May, above expectation

China trade surplus widened to USD 51B, both imports and exports declined

The results clearly showed some impacts in trade after US imposition on higher tariffs on USD 200B of Chinese goods came into effect. But so far, there was no notably improvement in US-China trade balance. US trade deficit with China came in at USD -140.5B in the first half, worse than USD -133.8B in first half of 2018.

New Zealand BusinessNZ Performance of Manufacturing Index rose to 51.3 in June, up from 50.4. BusinessNZ’s executive director for manufacturing Catherine Beard said that while the sector avoided further deterioration in activity from May, there were still a number of concerns about manufacturing’s current state of play.

She said: “The key sub-indexes of production (51.0) and new orders (52.8) recovered from May, which ensured the sector didn’t fall into contraction for June. However, employment (48.0) worsened to its lowest level since August 2016, while deliveries of raw materials (48.9) also fell into negative territory for the first time since December 2017, and its lowest result since September 2012. 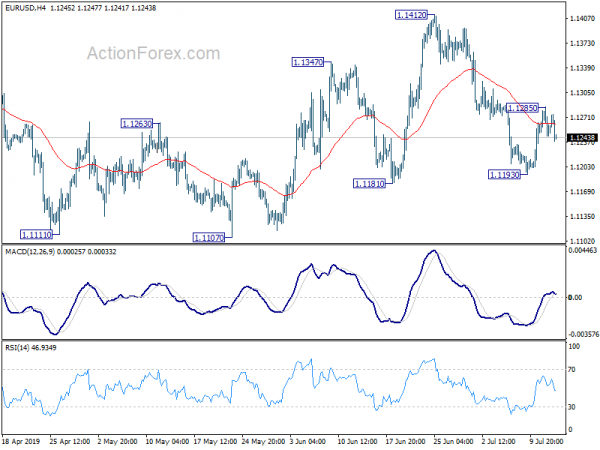 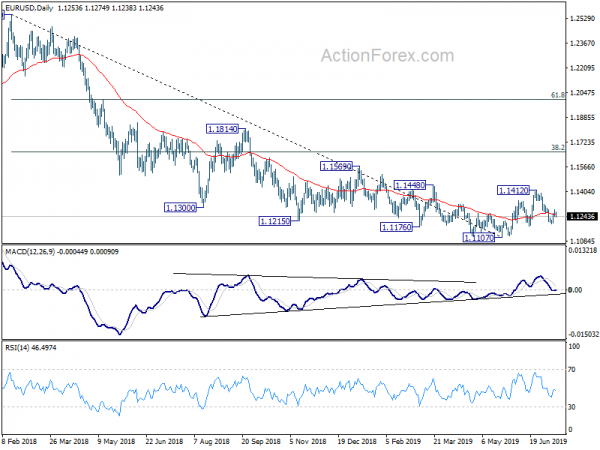