Commodity currencies remain the strongest ones for today with help from mild risk appetite. Dollar is trying to recover on stronger than expected manufacturing data, but no follow through buying is seen yet. The greenback will need more positive data release to offset recent selling pressure. On the other hand, Sterling is leading Euro lower today. In particular, the Pound looks rather vulnerable ahead of important economic data this week, including employment, CPI and retail sales.

Technically, EUR/GBP bounces off 0.8954 minor support today. Thus, there is no indicate of near term reversal yet. Recent rise might extend through 0.9010 temporary top. But we’d continue to expect strong resistance from 0.9101 to limit upside. With selloff in the Pound, GBP/JPY is heading back to 135.07 temporary low and break will resume recent decline. AUD/USD is still eying 0.7047 resistance to confirm rally resumption.

US Empires State Manufacturing General Business Outlook improved to 4.3 in July, up 12.9 pts from -8.6. Looking at some details, new orders were little changed, and shipments increased. Unfilled orders and inventories continued to move lower, while delivery times were longer. The employment index remained negative, falling to its lowest level in nearly three years. Input price increases continued to moderate somewhat, while the pace of selling price increases remained modest. Indexes assessing the six-month outlook indicated that firms were fairly optimistic about future conditions.

Trump claimed that China’s growth slowing to worst in 27 years was a result of his tariffs, that prompted companies to leave China. And, this is why China wants to make a trade deal with him. He hailed his tariffs are brining in billions of dollar, and they pay by “devaluing & pumping”.

In his tweet, Trump said: China’s 2nd Quarter growth is the slowest it has been in more than 27 years. The United States Tariffs are having a major effect on companies wanting to leave China for non-tariffed countries. Thousands of companies are leaving. This is why China wants to make a deal with the U.S., and wishes it had not broken the original deal in the first place. In the meantime, we are receiving Billions of Dollars in Tariffs from China, with possibly much more to come. These Tariffs are paid for by China devaluing & pumping, not by the U.S. taxpayer!

Germany’s Economy Ministry said in the monthly report that the industrial economy continues to develop “sluggishly” as “headwind” from foreign demand remains “palpable”. Additionally, current data suggests a “calmer” pace in the service sector. And this indicates a “weak basic economic trend” for Q2.

The report further noted that “after the cautious development in the second quarter, the buoyant forces could again come to bear stronger if the external environment calmed down again.” But there are “significant downside risks” due to trade conflicts, Brexit and geopolitical tensions.

Markit Global Business Outlook Survey dropped from 24 in February to 18 in in July, hitting the lowest since data were first collected in 2009. The survey was carried out three times per year, and if shows net balance of global firms predicting rising output in the coming year. US has seen the biggest slide in business optimism apart from Brazil, down to 16. Confidence ticked higher in Eurozone to 27, but remained closed to six-year lows. UK also improved slightly 32, joint second-weakest since 2009. Japan’s reading dropped to three-year low at 11.

Chris Williamson, Chief Business Economist at IHS Markit, said: “The global business mood has darkened to the gloomiest since the height of the financial crisis in 2009. Escalating trade tensions have fuelled the downturn in optimism, exacerbating wider worries about slowing economic growth in key markets…. The big change since earlier in the year has been a marked deterioration of optimism among US companies, alongside a slide in business optimism in China, indicating how trade war tensions are hurting both economies. In contrast, sentiment picked up slightly in the eurozone and UK, albeit remaining worryingly subdued.”

Also June’s data come in stronger than expected. But it remains to be seen if the momentum towards the end of the quarter could sustain. Headwinds from US tariffs and weaker global growth would still likely drag down China’s growth ahead.

GBP/USD fails to sustain above 4 hour 55 EMA and dips mildly. But downside is held well above 1.2439 temporary low. Intraday bias remains neutral first. In case of another recovery, upside should be limited below 1.2783 resistance to bring fall resumption. On the downside, break of 1.2439 would resume the decline from 1.3381 to retest 1.2391 low. Firm break there will resume larger down trend. 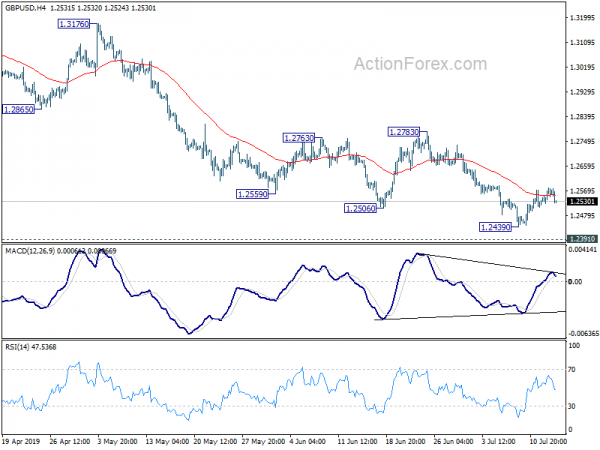 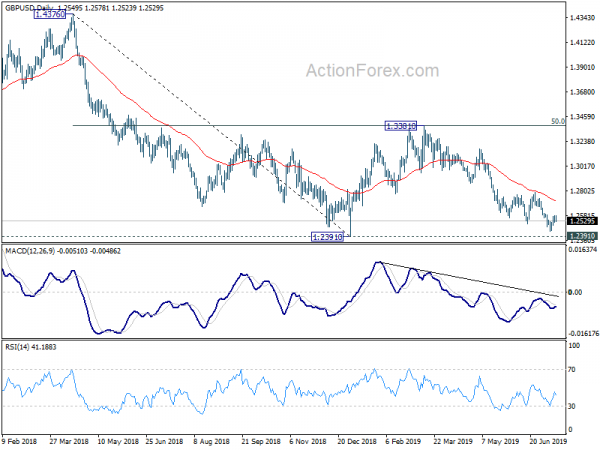