New Zealand Dollar strengthens broadly today after CPI picked up in Q2. On the other hand, Australian Dollar trades slightly softer after RBA minutes affirmed easing bias. Euro and Dollar strengthen mildly in Asian session. But both will face tests from economic data, including US retail sales and German ZEW. Sterling is also mixed as markets await UK job data.

Technically, despite rally attempt this week, AUD/USD and AUD/JPY are both limited below near term resistance at 0.7047 and 76.28 respectively. Buying momentum in Aussie is not too apparent for now. EUR/GBP will be a focus today with Germany and UK data featured. A range breakout is likely. Break of 0.9010 temporary top will resume EUR/GBP’s recent rise but we’d expect strong resistance from 0.9101 to limit upside. Meanwhile, break of 0.8954 minor support will indicate near term reversal.

In the minutes of July 2 RBA rate meetings, it’s noted that “the Board would continue to monitor developments in the labour market closely and adjust monetary policy if needed to support sustainable growth in the economy and the achievement of the inflation target over time.” The conclusion indicates that RBA is still adopting an easing bias after cutting interest rate in both June and July meeting. However, the next move will come “if needed”, as the central will first “monitor developments” to see how the economy reacts to the prior rate cuts.

New Zealand CPI rose 0.6% qoq 1.7% yoy in Q2, matched expectations. The annual rate accelerated from 1.5% yoy in Q1. However, the rise in headline inflation was largely due to the 5.8% quarter increase in petrol price, which contributed 0.25% to the 0.6% qoq figure. That suggests the pick-up could be temporary only, not to mention that annual CPI remains firmly below 2% mid-point of RBNZ’s 1-3% target range.

Stronger monetary stimulus and economic growth is required to lift inflation sustainably back to the 2% target. Yet, domestic and global headwinds remain. Thus, more OCR cuts are still expected for RBNZ. August could be the month to deliver even though it’s not totally certain yet.

US Mnuchin: Debt ceiling deal soon, another call with China this week

US Treasury Secretary Steven Mnuchin said yesterday that a deal is close on raising debt ceiling. and he didn’t see another government shutdown looming over the issue. Trump’s administration and Congress have been discussing a possible two-year budget that sets that overall federal spending for fiscal 2020 and 2021. He added “we’re getting closer”.

He emphasized that all parties wanted to reach an agreement on the budget issues. And, if a deal on all issues couldn’t be reached before summer recess, lawmakers would either stay put or approve an increase in the debt ceiling. He noted, “I think we’re very close to a deal, but as you know, these deals are complicated.”

Separately, he also noted that there will another telephone call with Chinese officials this week regarding resuming trade negotiations. And, “to the extent that we make significant progress, I think there’s a good chance we’ll go there later.”

EUR/GBP is staying in range below 0.9010 temporary top and intraday bias remains neutral. With 0.8954 minor support intact, another rise cannot be ruled out yet. But considering loss of upside momentum, we’d look for topping signal as it approaches 0.9101 key resistance. On the downside, break of 0.8954 support will indicate short term topping. In this case, deeper pull back could be seen to 55 day EMA (now at 0.8868) first. 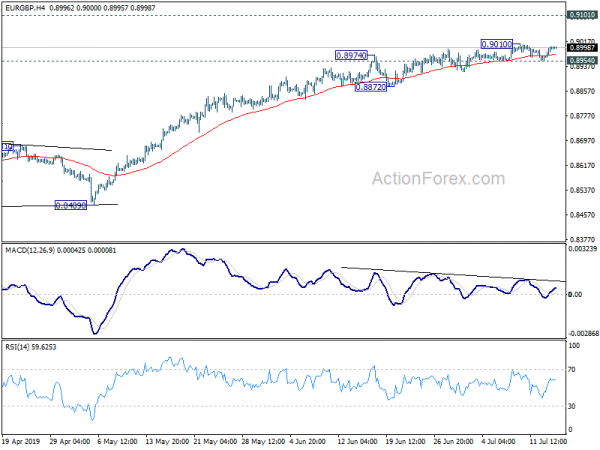 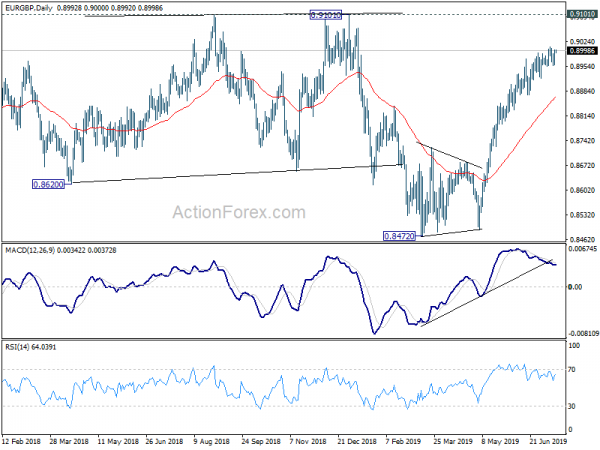 USD, JPY Strengthen In The Face Of Global Slowdown