Sterling has a very brief recovery today after Boris Johnson reaches the most important checkpoint to become the next UK prime minister. But the Pound quickly lost momentum and is back under pressure. Though, for now, New Zealand Dollar is the weakest one, followed by Euro, then Sterling. On the other hand, Dollar is extending recent this week’s rebound, and gains further momentum in early US session. Swiss Franc is currently the second strongest, followed by Australian.

Technically, EUR/USD’s break of 1.1193 support earlier today is the first sign of Dollar strength. It’s on tract to retest 1.1107 low. USD/CAD’s break of 1.3143 resistance is the second sign. A short term bottom is formed at 1.3016 and stronger rebound should be seen. 108.37 in USD/JPY will be an immediate focus now. Break will likely resume recent rebound from 106.78 through 108.99 resistance.

Boris Johnson wins the six-week Conservative leadership race and is set to become the next UK Prime Minister. Johnson defeated his rival Foreign Minister Jeremy Hunt with 92153 to 46656 votes of party members. It’s seen by some as a spectacular victory of the public face of the Brexit campaign. Current Prime Minister Theresa May will leave office tomorrow after meeting Queen Elizabeth, who’s expected to formally appoint Johnson afterwards.

Brexit, due date on October 31, is the first thing for Johnson to handle. He said the three priorities are to “deliver Brexit, unite the country and defeat Jeremy Corbyn.” Also, “We are going to energize the country. We are going to get Brexit done on Oct. 31 and we are going to take advantage of all the opportunities it will bring in a new spirit of can do.”

EU Timmermans: Hard Brexit a tragedy for all sides

EU chief Brexit negotiator Michel Barnier said EU looks forward to “working constructively with Johnson when he takes office, to facilitate the ratification of the Withdrawal Agreement and achieve an orderly Brexit. Also, EU is ready also to rework the agreed Declaration on a new partnership in line with EUCO guidelines.

He added, “we will hear what the new prime minister has to say when he comes to Brussels.” “A no-deal Brexit, a hard Brexit, would be a tragedy – for all sides, not just for the United Kingdom,” Timmermans said. “We are all going to suffer if that happens.”

Comments of BoE hawk Michael Saunders suggest that he won’t be pushing for rate hike for now. He said in a Bloomberg interview that “the economy right now is clearly not overheating – the underlying pace of growth, stripping out all of the funny effects, inventories, car shutdowns and so forth, is weak and below trend”. Thus, “the link from the forecast to my actual vote was quite loose.”

He added, the most recent “forecast of excess demand and above-target inflation didn’t at that point prompt me to vote for higher rates”. And, “what you get then is a tension, a disparity, between the forecasts and the actual policy vote.”

Regarding policy reaction to Brexit on October 31, he reiterated the central bank’s stance that response wouldn’t be automatic. “It’s hard to know how it would play out with any certainty,” he said. “I wouldn’t want to give a strong steer now as to which way policy would go.” Nevertheless, no matter what the BoE does, “monetary policy could not prevent a no-deal Brexit being painful for the economy, for businesses and for households.”

According to the monthly economic report by Japan’s Cabinet Office, the economy is “recovering at a moderate pace,” but there was “weakness continuing mainly in exports.” Asia bound exports were particularly poor due to China’s slowdown and weaker demand for high-tech products. .

Nevertheless, the reference to weakness in “industrial production” in the June report was dropped. Instead, production of “transport goods continued to increase, while the decline in machinery production could be seen easing a little,”

Businesses show “cautiousness further” but investment is still “on the increase at a moderate pace”. Also, employment situation is “improving steadily” while private consumption is “picking up”.

In Japan, Kyodo news reported today that Chief Cabinet Secretary Yoshihide Suga and Finance Minister Taro Aso will likely retain their posts in a cabinet reshuffle. Prime Minister Shinzo Abe said he has noted decided on the cabinet yet, after winning a solid majority in the upper house election on Sunday. The new cabinet will likely be announced in September.

Separately, Aso said after a cabinet meeting that the election gave the ruling coalition a stable political footing. Hence, he said, “I believe we won public trust for the sales tax hike”.

This somewhat echoed Abe’s comment yesterday that based on a stable political basis, the Abe cabinet will take more aggressive and bold economic measures than ever.”

RBA Kent: Without rate cuts, Aussie dollar might have been higher

RBA Assistant Governor Kent said in the Q&A of a speech that the exchange rate transmission from interest rate cuts have been “broadly working as you would expect.” Though, the Australian Dollar exchange rate was supported by a “welcome” increase in commodity prices, as well as dovish turn in other major central banks. That came even after the central bank’s back-to-back rate cuts in June and July.

On monetary policy, he said RBA is “a long way away from something like” quantitative easing. He noted elsewhere, QE was started “in the depths of the financial crisis when the credit system was quite impaired”. But “that’s not the sort of thing I think people have at the back of their minds here.” And monetary policies should be tailored to “your own economic circumstances”.

EUR/USD drops further to as low as 1.1163 so far in early US session. Intraday bias remains on the downside for retesting 1.1107 low. At this point, we’re not expecting a break there yet. Thus, focus will be on bottoming signals around 1.1107. Though, break of 1.1282 resistance is needed to signal completion of fall from 1.1412. Otherwise, further decline is in favor even in case of recovery. 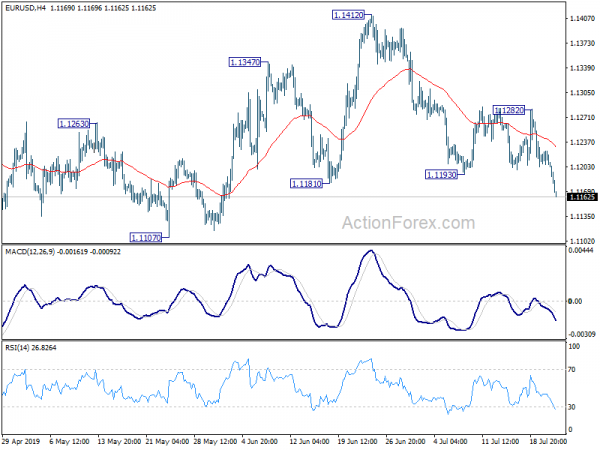 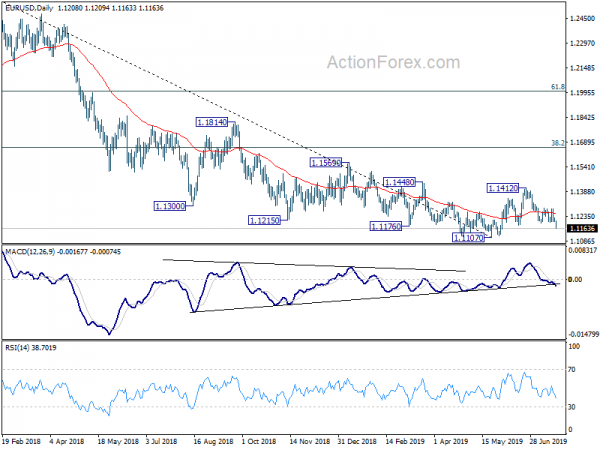