Risk appetite is striking a come back as another week starts, lifted by China’s measure to lower lending rates. Though, the response in the currency markets is rather muted. For the moment, major pairs and crosses are stuck inside Friday’s range. Dollar and Euro and the firmer ones while Aussie and Kiwi are weakest. But the picture can easily change.

Technically, weakness in Euro will be a focus today. EUR/USD is still on track to retest 1.1026 low. EUR/JPY is pressing 117.51 support. EUR/CHF is extending recent decline despite weak downside momentum. Sterling’s recovery last week was largely seen as corrective and recent fall might be ready to resume any time. GBP/USD and GBP/JPY are both kept below 1.2209 and 130.06 minor resistance levels, and stay bearish. Hence, any rebound in EUR/GBP might only be due to renewed selling in the Pound rather than recovery in Euro. We’ll see which way it goes.

Asian markets rebound strongly today as positive response to China’s latest interest rate reform that lowers funding costs for firms. The PBoC said over the weekend that it will improve the mechanism used to establish the loan prime rate (LPR) from this month. The central bank also pledged to “deepen market-based interest rate reform, improve the efficiency of interest rate transmission, and lower financing costs of the real economy,”

The new LPR quotations will be based on rates of open market operations, and the national interbank funding center will publish the rate every month on the 20th, starting August. Banks must set rates on new loans by mainly referring to the LPR and use LPR as the benchmark for setting floating lending rates.

Trump not ready for a China trade deal, nor business with Huawei

US President Donald Trump said on Sunday that he was “not ready to make a deal yet” with China on trade. Instead, he repeated he desire to see “Hong Kong worked out in a very humanitarian fashion” first. He added, ” I think it would be very good for the trade deal. Trump also indicated he’s not ready to do business with China’s tech giant Huawei yet. He said “at this moment it looks much more like we’re not going to do business… because it is a national security threat and I really believe that the media has covered it a little bit differently than that.”

Over 1.7million people turned out to a massive protest Hong Kong on Sunday. Ironically, the protest ended up peacefully with minimal police presence. The movement, prompted by objection to an extradition bill to China, lasted for more than 11 weeks. It also turned into a movement against intervention of Chinese Communist Party in this highly autonomous city, condemnation of excessive police violence and demand for true democracy. More protests are planned ahead and the “valiant” group could take over again if the peaceful demands are not met.

WH Navarro: Technically, we didn’t have a yield curve inversion

White House trade adviser Peter Navarro said that “technically, we did not have a yield curve inversion”. He explained that “an inverted yield curve requires a big spread before short and long,.” But, “all we have had is a flat curve.”

He also emphasized “we have the strongest economy in the world and money is coming here for our stock market. It’s also coming here to chase yield in our bond markets,”

Navarro also downplayed the impact of tariffs on Chinese imports. He noted “we’ve had tariffs on for over a year,” and “the Chinese have borne the entire burden of that by slashing their prices and reducing the value of their currency by 12%.”

German Merkel: We’re prepared for any Brexit outcome, even no-deal

German Chancellor Angela Merkel will meet UK Prime Minister Boris Johnson on Wednesday evening to discuss Brexit. Ahead of that, Merkel said on Sunday, “We are glad of every visit, and you have to talk, and you have to find good solutions.” But also, “we are prepared for any outcome, we can say that, even if we do not get an agreement.”

Merkel noted “at all events I will make an effort to find solutions – up until the last day of negotiations.” And, “I think it’s always better to leave with an agreement than without one. But if that’s not possible, we’ll be prepared for the alternative as well.”

Powell’s speech at Jackson Hole as highlight of the week

Looking ahead, Fed chair Jerome Powell’s speech at the Jackson Hole symposium on Friday will be the biggest event of the week. Fed fund futures are pricing in 100% chance a another rate cut in December. Powell is not given a chance to affirm or correct such expectations. Before that, Fed will also release July FOMC minutes, which should show how intense the debates for a rate cut was.

ECB meeting accounts will also be scrutinized. Expectations are high for ECB to announce some sort of significant easing package in September. The accounts could hopefully reveal what kind of package that could be. Eurozone PMIs would likely reaffirm the need of such easing. 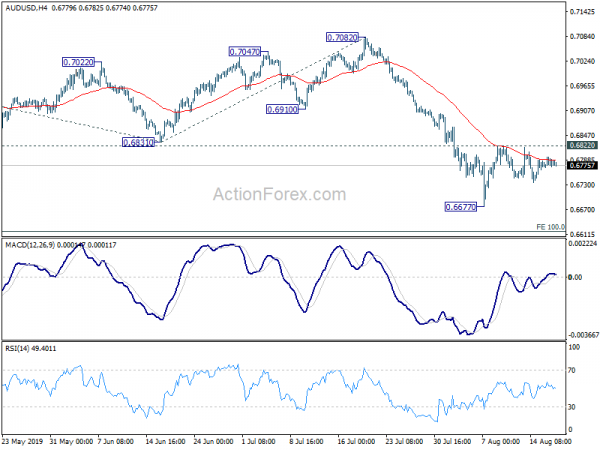 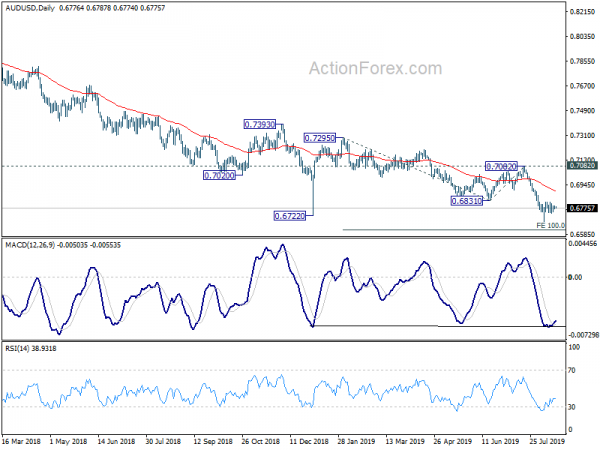