Technically, there is no breakout from recent consolidative moves yet. Near term outlook in EUR/JPY and GBP/JPY remain bearish for now. Break of 117.51 and 126.54 will resume recent decline. USD/CAD stays in consolidation from 1.3345 despite recent volatility. Further rise through 1.3345 resistance is expected sooner or later.

The minutes of July FOMC meeting showed that most members viewed the -25bps rate cut as “mid-cycle adjustment”, in response to the evolution of the economic outlook. That was in-line with Fed Chair Jerome Powell’s post meeting message that it’s not the start of a lengthy easing cycle. For any future adjustments, FOMC would “assess realized and expected economic conditions”, taking into account a wide range of information, including labor market, inflation, financial and international developments.

For those who voted for the cut, they sought to be “better position” the policy to counter effects from weak global growth and trade policy uncertainty, “insure” from downside risks and “promote” faster return of inflation to target. For the two dissenters, they noted larger positive economic data and anticipated “continued strong labor markets and solid growth in activity”.

US Congressional Budget Office projected the economy to grow 2.3% in 2019, unchanged from January forecasts. Growth is expected to gradually slow from 2020 to 2023, averaging 1.8% per year.

The slowdown ahead would be because growth of consumer spending subsides; as growth in purchases by federal, state, and local governments ebbs; and as trade policies weigh on economic activity, particularly business investment.

Additionally, “higher trade barriers—in particular, increases in tariffs—implemented by the United States and other countries since January 2018 are expected to make U.S. GDP about 0.3 percent smaller than it would have been otherwise by 2020.”

CBO further explained that “Tariffs reduce domestic GDP mostly by raising domestic prices, thereby reducing the purchasing power of consumers and increasing the cost of business investment. Tariffs also affect business investment by increasing businesses’ uncertainty about future barriers to trade and thus their perceptions of risks associated with investment in the United States and abroad.”

Japan Motegi: Gaps to be filled in US trade talks

Japanese Economy Minister Toshimitsu Motegi met US Trade Representative Robert Lighthizer on trade in Washington yesterday. After the meeting, he noted that talks have been “narrowed down quite a bit”, discussions are “deepening”. But there are still “gaps” to be filled.

Motegi said: “Issues that need to be sorted out in ministerial-level talks have been narrowed down quite a bit… We agreed to speed up discussions and work on the remaining issues for an early achievement of results… Discussions are undoubtedly deepening. But there are still gaps that need to be filled.”

Discussions will continue today after working level talks between the two sides. The teams are aiming to lay the groundwork for a possible meeting between Japanese Prime Minister Shinzo Abe and US President Donald Trump, to be held on the sidelines of this weekend’s G7 summit in France.

Joe Hayes, Economists at IHS Markit noted: “Preliminary August PMI data give plenty of promise that the solid growth trend seen in the GDP outturns so far this year could indeed stretch into the third quarter, providing a timely boost before the fourth quarter, which is likely to be adversely impacted by the consequences of sales tax hike”.

“The driving force behind this remains the service sector, which is lifted by resilient demand within the domestic economy. Flash data showed services activity growing at the fastest rate in almost two years in August, allaying fears, at least for the time being, that strong external headwinds being felt within manufacturing could spread to other parts of the economy.”

Australia PMI shift back into contraction, not immune to global risks

In August, Australia CBA PMI Manufacturing dropped from 51.6 to 51.3. CBA PMI Services dropped from 52.3 to 49.2. PMI Output dropped from 52.1 to 49.5. The set of data signalled the first reduction in output since March, centering on the service sector. CBA noted that “currency weakness led to a faster rise in manufacturing input prices, but services costs increased at a weaker pace, as did output prices across both monitored sectors.”

CBA Chief Economist, Michael Blythe said: “A persistent concern is that the fallout from the US-China trade war will dent global capex and consumer spending as cautious businesses and households retreat to the sidelines. The shift back into contractionary territory in the CBA Flash PMI reading for August indicates that Australia is not immune to these global risks….”The challenges faced by the RBA in their attempts to return inflation to the 2-3% target band are also highlighted in the survey. The lower Aussie dollar is putting upward pressure on input prices. But the competitive trading environment is limiting the flow through to output prices.”

Eurozone PMIs will be a major focus in the European session. ECB will also release monetary policy meeting accounts. UK will release CBI reported sales. Later in the day, US will release jobless claims, PMIs and leading indicators. 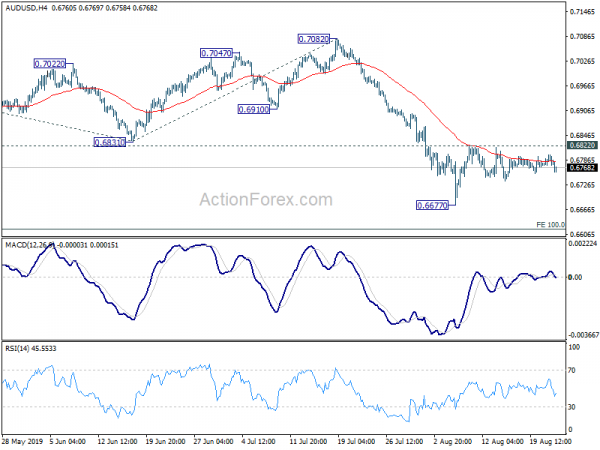 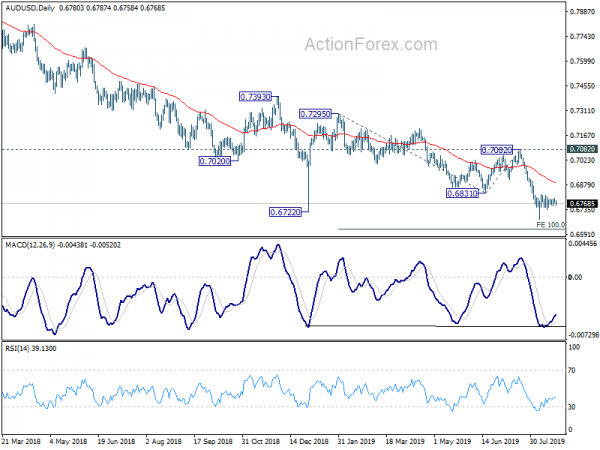