Asian markets opened higher earlier today following the strong close in US markets. China appeared to be backing down on further tariff retaliation, and there’s hope for continuation in US-China trade negotiation. But sentiments turned sour quickly on escalating tensions in Hong Kong.

Two prominent activists in HK are arrested today, while two protest organizers were assaulted yesterday. These came ahead of a banned rally tomorrow, which protests against the August 31, 2014 decision by the Chinese government to block free election in Hong Kong, which triggered the 79-day umbrella movement. Conflicts are expected in the upcoming weekend, which could lead to implementation of martial law like emergency law.

It should be remembered that US President Donald Trump has put resolution of HK tension as precondition to any trade deal with China. There is also bipartisan push for a HK human rights and democracy act in Congress in September, which could trigger furious response from China too. If the Chinese government cannot resolve the tensions in HK in internationally acceptable way, there is little chance of having a trade deal with the US.

A batch of mixed economic data was released from Japan today. Industrial production rose 1.3% mom in July, well above expectation of 0.3% mom. Growth was supported by increased production of cars and chemicals, which offset decline in oil products. The somewhat solid rebound in production offered a hopeful sign that manufacturers are weathering global slowdown and escalation of US-China trade war so far.

On the other hand, retail sales dropped -2.0% yoy in July, much worse than expectation of -0.6% yoy. The contraction raised concerns that momentum of domestic demand was much weaker than originally expected. In particular, consumption could be further strained by the planned sale tax hike later in the year.

Released from Australia, building approvals dropped -9.7% mom in July, much worse than expectation of 0.0% mom. The decline tool approvals to lowest level in more than six years, and down -28% on a year ago. Also, total approvals are now tracking materially below ‘underlying demand’ for the first time since 2013. The data highlighted risk that building activity is taking another leg down. Also released, private sector credit rose 0.2% mom in July, matched expectations.

Separately, RBA said in its corporate plan that “movements in asset values and leverage may be more important for economic developments than in the past given the already high levels of debt on household balance sheets.” And, “especially in the context of weak growth in household income, high debt levels could complicate future monetary policy decisions by making the economy less resilient to shocks,” it added.

UK GfK Consumer Confidence dropped to -14 in August, down from -11 and missed expectation of -11.

Joe Staton, Client Strategy Director at GfK, says: “Until Brexit leaves the front pages – whenever that will be – consumers can be forgiven for feeling nervous not just about the wider economy but also about their financial situation…. For a long time, the downward momentum in the Overall Index Score has been associated with our views on economy. But reduced confidence is now affecting how we see our personal finances.

“If there is a continuation of that dip in our feelings about our ‘future wallets’, we’d quickly see a headline score (the average of our five sub-measures) crash to a level that approaches the worrying figures seen in the worst days of the 2008/2009 financial crisis.”

Yesterday, IMF Managing Director Christine Lagarde said ECB has a “broad tool kit at its disposal and must stand ready to act.” She added “while I do not believe that the ECB has hit the effective lower bound on policy rates, it is clear that low rates have implications for the banking sector and financial stability more generally.”

Lagarde is expected to take over Mario Draghi as next ECB President on November 1. Her comments came as written answers to the European Parliament’s committee on economic affairs.

Swiss will release KOF economic barometer in European session. UK will release mortgage approvals and M4. Eurozone will release unemployment rate and CPI flash. Later in the day, Canada GDP will be a major focus. US will also release PCE inflation and Chicago PMI.

EUR/USD’s break of 1.1051 minor support suggests resumption of fall from 1.1249. Intraday bias is back on the downside for 1.1026 low. Decisive break there will resume larger down trend from 1.2555, for 1.0813 fibonacci level next. On the upside, above 1.1093 minor resistance will turn bias to the upside and extend the consolidation from 1.1026. But near term outlook will remain bearish as long as 1.1249 resistance holds. 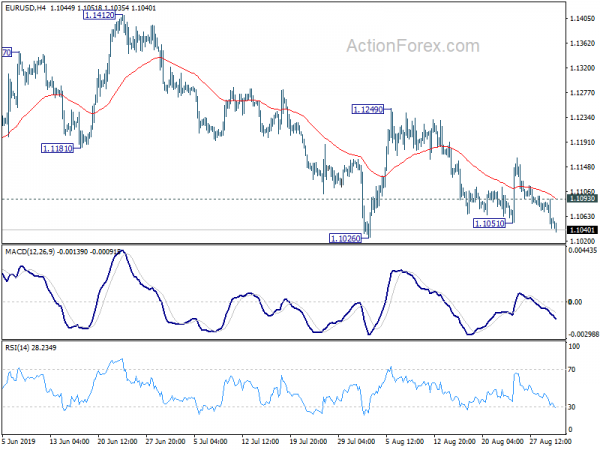 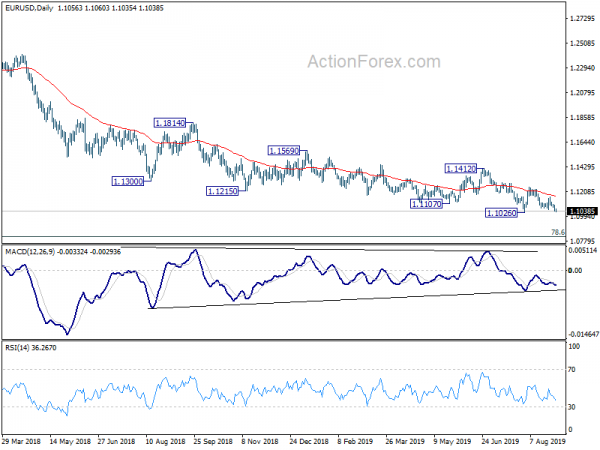